Bruce Linton may have been ousted from the cannabis firm he co-founded, but he’s still a big believer in the company’s future. The former co-CEO and chairman of Canopy Growth revealed after the firm’s stock slid Thursday morning that he’s been “watching the dips” and bought more shares during “this August sale.” Linton, who was abruptly removed as the de facto face of Canopy in July, declined to specify how much he bought. He did say, however, that he believes Canopy “continues to execute on the emerging opportunity” in the global and national pot markets.

Men almost twice as likely as women to use pot: StatsCan

Data released Thursday from the latest National Cannabis Survey suggests men are more likely than woman to use cannabis daily or weekly, and are also more likely to use the drug for non-medicinal purposes. The survey also shows that 16 per cent of Canadians over 15 years old used pot between April and June, down slightly from 17.5 per cent in the first three months of the year. About four in 10 users said they bought cannabis illegally. Statistics Canada has been conducting the survey every three months since last October’s legalization to track consumption habits.

Marijuana operator Acreage Holdings Inc. says U.S. lawmakers are likely to vote this year to allow cannabis companies to use federally-regulated banks, which would give them a means to deposit their stacks of cash. "Republicans are all about safety and they're all about taking cash out of the system," Acreage CEO Kevin Murphy said Wednesday. Acreage, which is headquartered in New York and listed on the Canadian Securities Exchange, has arranged to sell itself to Smiths Falls, Ont.-based Canopy Growth if and when cannabis is federally legalized in the U.S.

3 million
-- The number of new consumers who will enter the cannabis market after Canada legalizes edibles, extracts and topicals, according to a new survey conducted by EY Canada and Lift & Co. 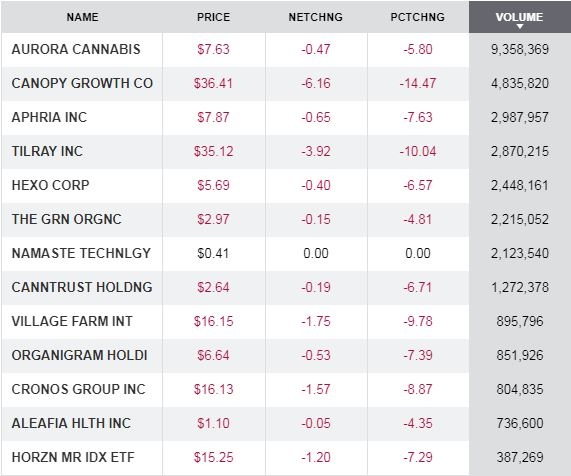