While COVID interrupted the cannabis industry in the short term, I'm excited about the future: Aphria CEO

FSD Pharma is throwing in the towel on its cannabis ambitions and instead plans to pivot to developing drugs to treat COVID-19. The company announced Thursday that it will wind down its cannabis operations, which entails forfeiting its licences to produce and sell legal pot and liquidating assets such as its Cobourg, Ont. facility. FSD said in a release that the company will soon submit an application to the U.S. Food and Drug Administration for one of its drugs to be used to treat patients afflicted with COVID-19. The company hopes it can begin “Phase 2” trials by the end of the year. FSD Pharma once touted that its facility, a former Kraft Foods manufacturing plant, would result in 1,500 new jobs.

Kelowna, B.C.-based craft cannabis producer GTEC Holdings reported its second-quarter earnings late Wednesday, posting a 36 per cent decline in revenue to $1.5 million from the prior three-month period. GTEC also booked a net loss of $197,000, better than the $815,000 net loss reported in the prior quarter, the company said. GTEC CEO Norton Singhavon said in a statement the revenue decline was attributed to the COVID-19 pandemic as well as packaging bottlenecks. Shares of the company fell by about seven per cent in trading on the TSX Venture on Thursday.

Cresco Labs appoints former WebCT CEO to board, Vice-Chair McCormack to step down

Chicago-based Cresco Labs announced Thursday that it has appointed former WebCT CEO Carol Vallone to the company's board. Vallone, who also serves as chair at McLean Hospital, a Harvard-affiliated psychiatric hospital, will replace Brian McCormack, Cresco's vice-chairman. McCormack is leaving the company as part of a planned board refreshment process, Cresco said.

Cannabis retailer and producer Delta 9 Cannabis reported preliminary second-quarter results late Wednesday, stating the company anticipates revenue for the quarter will come in between $12.7 million and $13.2 million. That would be a slight improvement from the $11.7 million in sales the company reported in its prior quarter. The Winnipeg-based company stated that according to its expected revenue and production costs, it should generate positive cash flows from its operations in its current fiscal year. Delta 9 will report its second-quarter results on August 14. The company's shares fell about three per cent in trading on Thursday.

The street value of the 510 pounds of cannabis seized by Toronto police on July 28 inside an industrial unit following complaints by the local community. 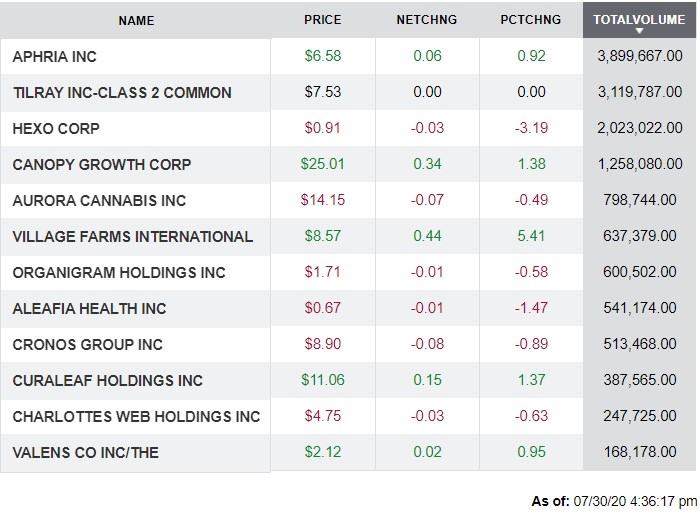