Will the cannabis sector bounce back from its 3-month slump?

GW Pharmaceuticals gets EU approval for its cannabis-based epilepsy drug

London-based GW Pharmaceuticals said Monday the European Commission has approved its drug Epidyolex to be used to treat childhood epilepsy, the first such cannabis-based medicine to be granted that approval. European authorities approved Epidyolex for seizures associated with two rare and severe forms of epilepsy, Lennox-Gastaut syndrome (LGS) and Dravet syndrome for patients aged two years and older, the company said in a release. The orally-administered solution, which lacks the ‘high’ typically associated with using cannabis, is already on the market in the U.S. and should be available soon in the U.K. and the rest of Europe, The Guardian reports.

Medical marijuana patients in New York state now have an outlet to purchase dried flower for their medicine after Curaleaf announced it will make the product available for sale in the state. Curaleaf said in a release it plans to make its “ground flower pods” available in its Long Island location, the first dispensary in the state to offer dried flower as a medical product. Canaccord analyst Matt Bottomley sees the announcement as a positive development for New York’s medical cannabis market as a whole as it could allow its patient base to expand to about 400,000 from around 107,000 currently. That represents an annual revenue opportunity of US$1.2 billion, Bottomley said.

Slang Worldwide told investors Monday that its directors, alongside former Canopy Growth co-CEO Bruce Linton, entered into lock-up agreements to hold onto their stock for at least one year. Linton announced last week he made a private investment in Slang, which makes and distributes cannabis products and accessories in the U.S. Slang said an aggregate of approximately 53 million common shares is locked up until Sept. 16, 2020. Cannabis companies have recently announced stock lock-ups to provide confidence to the market as well as to protect against any potential hostile takeovers.

15%
-- The market share decline seen by vape products in the U.S. since hundreds of cases of mysterious, vaping-related lung illnesses have broken out across the country, according to New Frontier Data 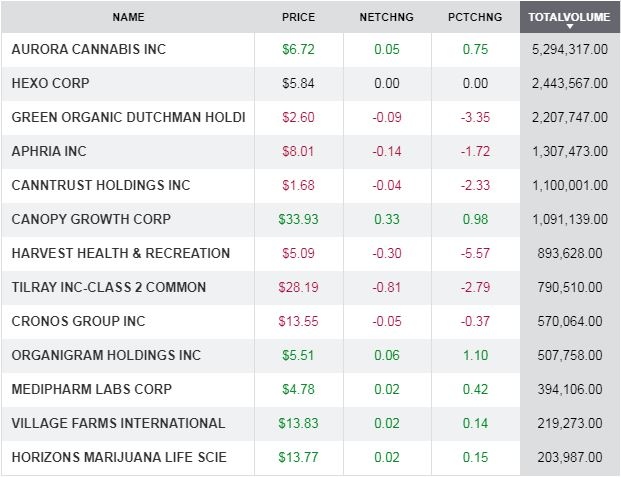