Has the bottom been hit for the Canadian cannabis sector? New York-based Cantor Fitzgerald believes so. A Cantor analyst initiated coverage for six cannabis stocks on Tuesday, predicting several positive events in the coming year that should catalyze pot stocks as valuations trade at two-year lows. Cantor Fitzgerald Analyst Pablo Zuanic, who initiated coverage of six cannabis stocks Tuesday, said in a report to clients that several pot companies are attractive at current levels based on the long-term opportunity and that concerns hanging over the sector are priced in and overdone. He initiated coverage of Aphria Inc. and Organigram Holdings Inc. with “overweight” ratings, while Aurora Cannabis Inc., Canopy Growth Corp. and Tilray Inc. were assigned “neutral” ratings. Hexo Corp. was assigned an “underweight” rating. Zuanic sees the Canadian cannabis recreational market expanding to $2.44 billion in sales in 2020 and $4.5 billion by 2022, which is generally in line with what other analysts have estimated.

WeedMD provides update on outdoor grow, expects testing results to be revealed by end of month

Toronto-based cannabis producer WeedMD said it has completed the harvest of its 27-acre crop of outdoor cannabis at its Strathroy, Ont. facility. The company plans to release some of its outdoor crop to the recreational market once regulatory compliance testing is completed. Some of the strains it plans to make available include Pedro’s Sweet Sativa, Ghost Train Haze, ACDC and Ultra Sour as well as some new cultivars. The company said it will provide various metrics related to its outdoor cannabis harvest, including total yield, during the company’s earnings call on Nov. 29.

Harvest Health & Recreation’s US$850 million deal for Verano Holdings took a step closer to closing on Tuesday after both companies “certified substantial compliance” with the U.S. Department of Justice’s request for further information regarding the acquisition. Harvest first announced plans to acquire Verano in March, but its closing has been delayed due to regulatory scrutiny. The companies now await a 30-day waiting period from the DOJ to complete its investigation into the deal. Once completed, the combined company will have licenses to operate up to 200 facilities in 16 states and territories including 123 retail dispensaries, making it one of the largest multi-state operators in the U.S.

Florida recently allowed its medical marijuana users to consume the drug by smoking flower – the issue is that most of the dried cannabis flower available in the U.S. state is out of stock. The Miami Herald reports that 15,000 ounces of the whole flower drug has been dispensed by the state’s licensed medical marijuana companies for the 280,000-odd qualified patients in Florida since March. However, keeping up with that demand – some of it as a result of shifting consumer tastes amid an ongoing vape-related health scare – has been difficult for some companies including Trulieve and Liberty Health.

1,923
-- The average number of daily customers that Planet 13 Holdings’ Las Vegas cannabis dispensary served in October, the company said in a release on Tuesday. 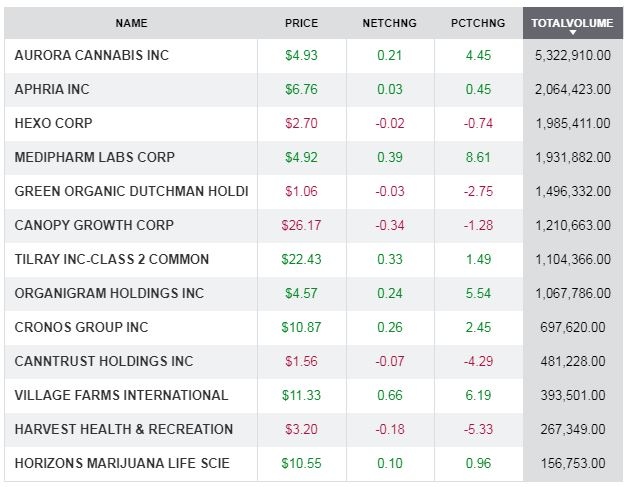