U.S. FDA to hold initial hearings on CBD dosage limits in food and drinks this week

The U.S. Food and Drug Administration will be holding its first public hearing Friday into how it should regulate CBD products, the first step in a process that could ultimately regulate how much of the cannabis compound can be included in food and drinks. Bloomberg reports that the U.S. government agency’s hearings will focus on determining what threshold level of CBD could be allowed in foods without undermining how cannabis-related compounds could be impacted by a pharmaceutical drug approval process or risking any commercial incentives for further clinical study. That could mean that lower dosages of CBD could be approved for food and drinks while higher doses would be reserved for medical drugs. The hearings will be closely watched given that the nascent CBD market in the U.S. could be worth as much as US$15 billion in five years, according to analysts at Piper Jaffray & Co.

WeedMD said Monday its Aylmer, Ont. facility secured a licence amendment from Health Canada that will grant the company an additional processing area equipped with semi-automated packaging lines. The processing room and packaging lines are installed and currently undergoing final testing and calibration, the company said. The expanded packaging lines are said to be fully operational in the third quarter of this year. Several cannabis producers have cited packaging issues as being one of the key reasons why Canada’s legal pot market has suffered from frequent supply shortages. WeedMD will report its latest quarterly results on Thursday.

Breath of Life International, Israel’s largest medical cannabis producer, recently filed a preliminary prospectus for a proposed initial public offering of shares  with the Toronto Stock Exchange, aiming to be the first Israeli cannabis firm to list on the main exchange. The Times of Israel reports that the company, also known as BOL Pharma, produces medical cannabis and cannabis products that supplies pharmacies and patients with its products. The firm is targeting export markets in the EU, as well as Canada and Australia. According to the filing, BOL posted revenues in 2018 of $3.5 million, up from $3 million in 2017, and posted a net loss of $29.3 million, compared with a loss of $6.4 million a year earlier.

Will Hexo Corp. emerge as a dominant player in the Canadian cannabis industry? Sébastien St-Louis, founder and CEO of Hexo, told BNN Bloomberg, that the company’s goal is to become one of the two dominant players in Canada, leveraging their distribution to all 10 provinces as well as its partnership with Molson Coors to develop cannabis-infused drinks. “When we look at market share, that means it has to be between 20 per cent to 40 per cent long term,” St-Louis said. The company intends to have a full suite of cannabis consumables ready for sale later this year with beverages, a full line of vape products and gummies, St-Louis said. The company recently closed its $263 million deal to acquire Newstrike Brands.

8,898
-- The amount of cannabis seeds sold in Canada for both medical and recreational purposes in March, according to statistics released by Health Canada late Friday. 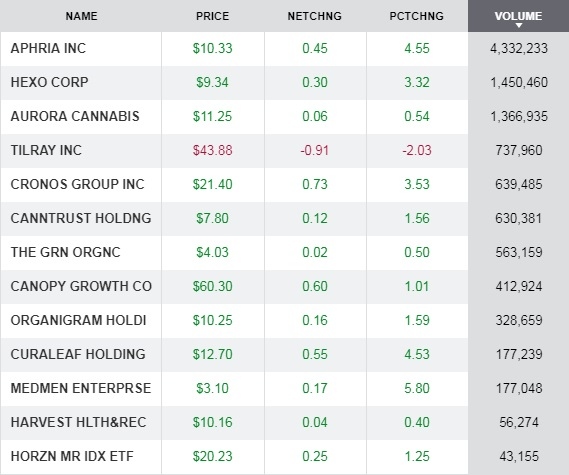