'Huge potential on the IP side' for Constellation's investment in cannabis: Christy Clark

A Florida petition aimed at legalizing recreational cannabis has more than 100,000 signatures ahead of an effort to get the issue on the ballot during the 2020 election. West Palm Beach’s CBS affiliate reports that the petition, launched by a group called Make It Legal Florida, would allow adults aged 21 or older to buy recreational pot, with sales taking place at existing medical marijuana dispensaries. The petition has already surpassed the minimum signature amount needed to go under a state Supreme Court review, although the signatures need to be verified. The petition needs 766,200 signatures by February to make it it onto the ballot for the November 2020 general election.

A group of Saskatchewan-based independent pot retailers are teaming up to tackle what they believe is the growing influence of “Big Cannabis” within the industry. More than two-thirds of the province’s 36 pot stores are operated by a publicly traded company or chain, the CBC reports. Owners of the smaller, independent stores say it’s challenging for their stores to compete with larger interests that can secure supply contracts at much higher volumes. Indie retailers have assembled the Weed Pool Cannabis Co-operative in an effort to obtain better pricing as a group and better product selection from other suppliers in the country.

Eaze lays off 20% of staff, citing realignment with market realities

U.S.-based cannabis delivery firm Eaze is shedding 20 per cent of its staff in an effort to “realign” the company’s operations with “market realities”, according to a report in Cannabis Now. The website reports that 36 staff members were let go earlier this week in a company-wide email from newly-appointed CEO Rogelio Choy, Eaze’s former COO. The layoffs come amid a legal battle between Eaze and Canadian-based DionyMed, which has alleged improprieties on how payments are processed from its U.S.-based company.

Quebec-based pot producer Hexo announced late Friday its CFO Michael Monahan, has made the decision to resign, effective immediately. In a statement, Monahan said he’s leaving the company for family reasons and will continue as a consultant to ensure a smooth transition with his replacement. Hexo’s VP of strategic finance Stephen Burwash will assume the role of CFO.  Hexo’s shares have fallen 25 per cent since reporting third-quarter revenue figures that missed analyst expectations.

Payment processor Square is getting into the CBD market. The company announced Thursday it would allow CBD merchants, who typically have a difficult time getting payments for cannabis-related products processed, to use its system to handle transactions. Square will charge CBD sellers 3.90 per cent plus 10 cents per transaction for in-person tap, swipe, and dip payments, whereas online payments will be slightly more. Still, Square isn’t ready to open its platform to other cannabis-related merchants, citing a lack of clarity on regulations at the federal level.

$7.07
-- The price of a gram of cannabis in Canada, down 3.3 per cent from the prior week, according to the Cannabis Benchmark’s Canada Cannabis Spot Index. This equates to US$2,415 per pound at current exchange rates. 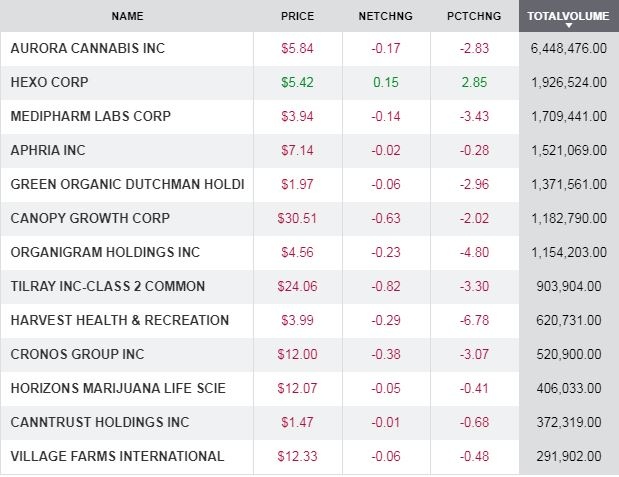