Hexo Q3 results show path to profitability, but only with more pot shops

Hexo was a rare out-performer on the TSX on Thursday, the same day the Ottawa-based company reported better-than-expected third-quarter results. Hexo said its revenue in the quarter ending April 30 climbed 30 per cent to $22.1 million, while it booked an adjusted-EBITDA loss of $4.3 million, bettering the $8.5-million loss in its prior quarter. Hexo CEO Sebastien St-Louis said the company is on track to report positive cash flow by the end of the year, but would need more pot stores need to open in Ontario and Quebec to get there. Raymond James analyst Rahul Sarugaser said in a report that roughly 80 per cent of Hexo's revenue came from Quebec, and investors are likely rewarding the company for its revenue figures in a sequestered market.

Toronto-based cannabis producer WeedMD released its year-end 2019 results and preliminary first-quarter results late Wednesday. The company said its fourth-quarter revenue came in at a scant $2.85 million, while reporting $12.1 million in sales in its next three-month period. The increase in sequential quarterly sales was aided by the inclusion of revenue from WeedMD’s acquisition of Starseed Medical. The company also reported an adjusted-EBITDA-loss of $13.9 million in its last fiscal year. WeedMD expects to file its first-quarter financial results in mid-July.

Quebec to get same-day delivery by end of year: SQDC

Quebec will soon get same-day delivery of legal cannabis, according to its provincial retailer. The Montreal Gazette reports that the Société québécoise du cannabis (SQDC) has struck an agreement with a delivery company which will test out the same-day service in Quebec's most populous city before expanding province-wide over the course of the year. The move comes as the the SQDC hopes to further compete with the black market, which offers delivery times as fast as one hour, the newspaper reports.

Cannabis device- and brand-operator Slang Worldwide is getting a new CEO after the company's founder and former head Peter Miller transitions to an executive chairman role. Slang said in a statement on Thursday that it will appoint Chris Driessen, the company's U.S. head, as its new CEO. It also announced a slew of other management changes including a new COO and CFO. As well, Slang said it does not plan to exercise an option to acquire NS Holdings and will end its planned acquisition of Arbor Pacific as a result of changing to a more "conservative capital allocation strategy." 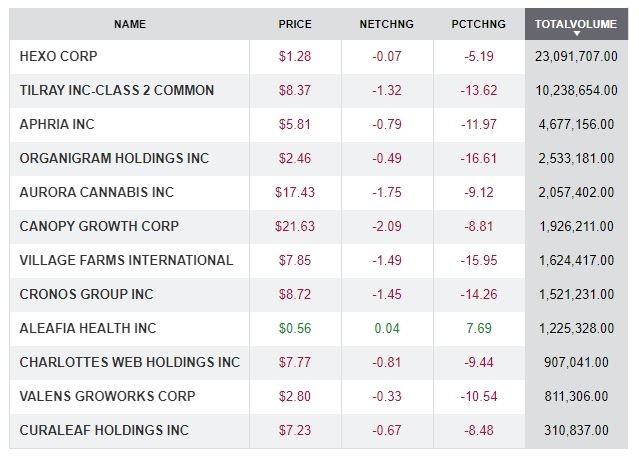