We're not looking for 'global domination' yet: Second Cup CEO

It’s an inconspicuous, red-bricked two-storey building located on a Scarborough, Ont. side street which was the cornerstone that helped seal the deal for Canopy Growth to fend off competitors and become Drake’s cannabis partner. The only licensed cannabis facility in Drake’s hometown of Toronto, able to grow 4,000 kilograms of pharmaceutical-grade cannabis, emerged as the linchpin that got the deal done, bucking other advances from competing cannabis producers including Aurora Cannabis. The building contains 38 vegetation and growing rooms; three dispensing rooms; $7 million worth of heating, ventilation, and air conditioning equipment as well as a two-floor-high security vault cooled to -17 degrees Celsius to maintain product freshness.

Second Cup remains interested in the pot business. The coffee purveyor is re-branding as Aegis Brands and is looking for acquisitions in both the food service and cannabis industries. Second Cup chief executive officer Steven Pelton told BNN Bloomberg in a Friday interview the company will be employing different tactics with potential partners in the two industries. “With cannabis we need a joint-venture partner that really knows cannabis, because we’re more of a real estate play in allowing them to use our real estate,” he told BNN Bloomberg. This is not Second Cup’s first foray into cannabis. The company entered into a ‘strategic alliance’ with National Access Cannabis – which has since re-branded to Meta Growth – in April of 2018, hoping to convert underperforming coffee houses into Meta-branded dispensaries.

It’s time for the NBA to reconsider its ban on cannabis, according to former commissioner David Stern. He told CNBC that his stance on cannabis has changed following the recent interest in medical use of THC and CBD — the two main compounds in cannabis — to treat pain, anxiety and other ailments. “In many cases in sports,” Stern told CNBC, “the opioid crisis begins with players being prescribed pills for their pain, and if there is another substance, whether it be CBD or THC that eases pain, then I’m all for it.” NBA players are currently tested four times during the season for drugs, according to its collective bargaining agreement, but don’t get tested during the off-season.

Alexandria Ocasio-Cortez is not only down with legal weed, but in favour of decriminalizing the use of and research on psychedelics. The Democratic U.S. congresswoman, often dubbed AOC, voiced her support for the reform of psychedelic compounds for medicinal at a recent drug policy reform conference, according to Marijuana Moment. Ocasio-Cortez also stated she’s working on legislation that would legalize cannabis in the U.S., but do so in a humane way that “doesn’t exacerbate so many of the injustices from the war on drugs.”

Canadian cannabis giant Canopy Growth is paring down its staff in Latin America in light of the slower pace of cannabis development in that part of the world, according to MJBizDaily. The website reports that Canopy Growth is laying off 15 per cent of its workforce there, or 14 people, in order to “to streamline operations and prioritize key markets.” MJBizDaily also reports that Canopy is realigning its focus in Latin America with an eye on Colombia, Peru and Mexico, while noting that staff in Argentina was impacted by the layoffs which will now be represented by its regional team.

$6.76
- The price of a gram of cannabis in Canada, up 0.4 per cent from the prior week, according to the Cannabis Benchmark’s Canada Cannabis Spot Index. This equates to US$2,329 per pound at current exchange rates. 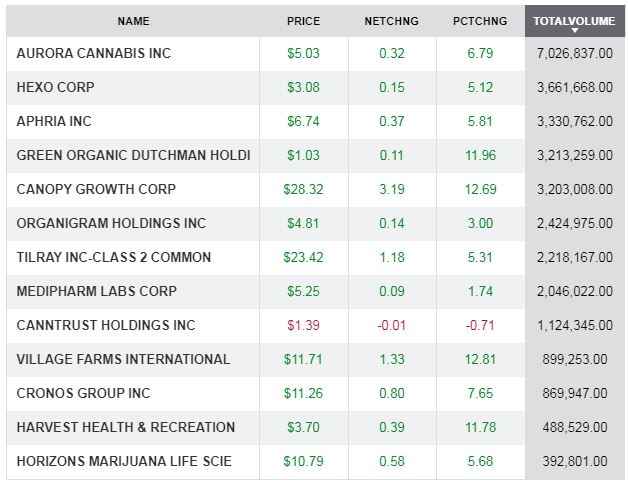