Cannabis firms that relied on stocks to fund growth now have to find other sources: Analyst

MedMen shares drop after pulling out of PharmaCann deal

Shares of MedMen Enterprises plunged Tuesday after the Los Angeles-based cannabis company said that it will terminate an all-share deal for PharmaCann despite receiving antitrust approval less than a month ago. MedMen CEO Adam Bierman said in a statement that the decision to call the deal off was “based on the current macro environment and future opportunities that exist for our business.” MedMen was one of the first of several U.S. cannabis mergers that were under Department of Justice review to get the green light last month, which it announced with some fanfare. PharmaCann will transfer cannabis licences and related assets in Illinois and Virginia to MedMen as part of the deal’s termination fee.

Aleafia Health announced Tuesday it will end a supply agreement with Aphria after claiming the Canadian pot giant failed to meet its obligations under the deal. In Sept. 2018, Aphria agreed to provide Emblem Corp. with up to 175,000 kilograms of high quality dried cannabis flower and crude cannabis oil at preferred wholesale pricing over a five-year period. In March, Aleafia acquired Emblem for $173 million in an all-stock deal. Aleafia said in a security document filed in August that it deposited $22.7 million with Aphria under terms relating to the cannabis supply agreement with Emblem.

The developments in the cannabis space on Tuesday show that there’s no clear sign that the beleaguered cannabis industry is turning the corner, according to an analysis by BNN Bloomberg’s David George-Cosh. Aside from the day’s developments, dark clouds are cast across the sector amid regulatory woes, disappointing earnings, retail issues and an emerging health crisis. It’s a sign that investors may have bought into the cannabis hype, rather than acknowledging its legalization was about ensuring public safety and not industry profits, said one industry observer.

Illinois’ legal cannabis industry is expecting to see a job boom in the coming years, with one report suggesting the state will employ more than 63,000 people in the pot sector by 2025. That’s about the same number of elementary school teachers in the state, according to the Chicago Sun-Times. Illinois currently employs nearly 5,800 people in cannabis, according to New Frontier Data. The U.S. has about 340,000 people employed in the pot sector, compared to about 9,200 people in Canada. New Frontier forecasts U.S. pot-related jobs should climb to about 743,000 by 2025.

US$639.2 million
-- The total value of cannabis sales tracked in Arizona, California, Colorado, Nevada, and Oregon in August. The total marks a 4.1-per-cent increase from the prior month, according to BDS Analytics. 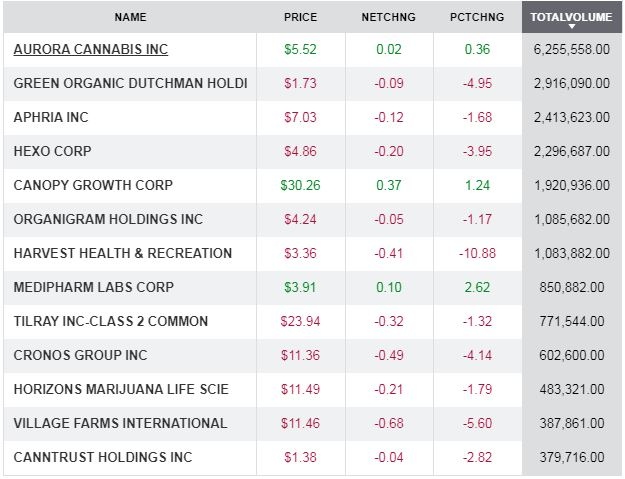