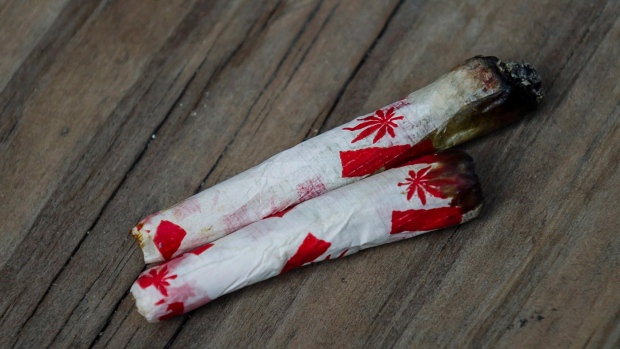 Marijuana joints rolled with Canadian-themed paper are photographed at a "Wake and Bake" legalized marijuana event in Toronto on Wednesday, October 17, 2018. , THE CANADIAN PRESS/Christopher Katsarov

Since legalization more than 60 producers have sold into the legal market, over 1,200 licensed pot stores opened their doors and $8.6 billion has been contributed to the Canadian economy. Still, challenges remain.

Eric Foster, a Toronto-based partner at Dentons Canada LLP, plans to tackle those challenges after being tasked with leading Canadian Chamber of Commerce's industry-led review of the Cannabis Act over the course of the next year.

"When the government starts their review, we're going to be hopefully in a position where we can go to them and very credibly say: 'Look, we've done a lot of this work for you,'" Foster told BNN Bloomberg in a phone interview. "It's so important when you're advocating for things, especially with the government, that you can credibly say you're speaking with one voice as an industry."

Lawmakers will begin their review of the Cannabis Act when the legislation turns three in Oct. 2021. Foster expects the process to take roughly 18 months to complete. Once that's done, the government may decide to ease or strengthen certain parts of the law, or do nothing at all.

Foster's work will take him (virtually for now) to six roundtables examining concerns and ideas brought forth from across the cannabis industry. That agenda is expected to include regulatory burdens, retail sustainability, addressing the illicit market and preventing money laundering.

"This was a novel piece of legislation," Foster said. "Generally speaking, the government did a really nice job with it. But a couple of years into this, there is no doubt - and we've heard time and time again - that there are pressure points that are making it very hard for these companies to compete. So everybody's really excited about the opportunity to hopefully drive that meaningful change."

But if there's one thing Foster believes the government should focus on, it's creating an economic mandate tied to the Canadian cannabis industry. That may see an increased focus in an economy tattered by the COVID-19 pandemic.

"Right now, this is not really part of anybody's economic mandate. It's solely being looked at under the purview of Health Canada," Foster said. "I can't stress that enough, but from our understanding, there's been no real economic focus on this legislation."

The week kicked off with a slew of earnings from Canadian cannabis giants Canopy Growth, Aurora Cannabis and Tilray. While Canopy's results came in above expectations (despite still posting an adjusted EBITDA loss of $85.7 million), Aurora and Tilray both reported mixed results that sent the companies’ shares tumbling during the week. However, it was clear that the U.S. election piqued analysts interest, as they inquired about the companies’ American plans amid growing momentum toward cannabis legalization stateside. Canopy and Aurora are keeping their eyes on U.S. developments, with the former already building out some of its brands via its relationship with Acreage Holdings. Aurora, meanwhile, sees its research into cannabis science and genetics as ways to port over its expertise to the U.S. without the need to develop a physical presence there.

Pot may be a common ground to unite Democrats and Republicans, Bloomberg columnist says

If President-elect Joe Biden is looking to find some common ground with Republicans, cannabis may be a good place to start, writes Bloomberg Opinion columnist Tara Lachapelle. With cannabis now legal in some form in about 70 per cent of the U.S., the marijuana industry needs some political will to flourish - and the prospect of the federal government weighing in and nudging it in the right direction is suddenly looking better, Lachapelle writes. More than half of Republicans say cannabis should be legalized, while a recent survey by Pew found that about two-thirds of U.S. adults are in favour of marijuana legalization. That percentage jumps to 91 if you include those who at least support it for medicinal purposes. "This is the moment that cannabis companies and their investors have been waiting for: to be considered a legitimate industry rather than a hot voting issue. From here, the goal is to make weed every bit as normal as junk food, wine and other vices long found in stores across America," Lachapelle wrote.

Israel on track to legalize recreational cannabis within the next year

Israel is set to be the next country to legalize cannabis for recreational use after the country's justice minister issued a memorandum stating legalization would go into effect nine months after a bill is passed in the Knesset, the Times of Israel reports. The law will allow people 21 and over to purchase cannabis at specialized stores, which will also be allowed to make deliveries, the Times reports. However, the stores will be barred from selling edibles that resemble candy. Prices for Israeli cannabis will be "reasonable" to avoid encouraging people to purchase from the illicit market, according to the Times. The law is also likely to issue a blanket ban on smoking cannabis in public spaces and will not permit home growth unless a special licence is obtained.

If Canada is looking for new ways to boost its tourism and hospitality industries, they might want to take a look at how cannabis can help, writes Nathan Mison, co-chair of the National Cannabis Working Group. In an op-ed published in the Edmonton Journal, Mison said that cannabis consumption lounges and pop-up cannabis retail outlets could create an entire new revenue stream associated with both domestic and international cannabis tourism. He added that cannabis presents a unique "economic opportunity" to aid Canada’s recovery from the COVID-19 pandemic. However, it may require federal and provincial governments to do a little creative thinking to reduce red tape and such things make a reality.

It was another banner quarter for Village Farms International and its Pure Sunfarms cannabis subsidiary. The company reported third-quarter results on Friday with revenue and EBITDA figures of $17 million and $4.3 million, respectively, that handily beat analyst expectations. Roughly half of its sales were comprised of dried flower, while about five per cent were from vapes and oil products. Wholesale accounted for the rest of Pure Sunfarms' revenue. The company also claimed that it had a 15.2-per-cent share of dried flower in Ontario's online cannabis store in October, although there's no way to verify that figure.

Canaccord Genuity analyst Matt Bottomley raised his 12-month price target on U.S. cannabis operator Green Thumb Industries (GTI) to $34 from $27 while maintaining a "speculative buy" on the company's stock. GTI released banner quarterly results on Tuesday that represented another strong period of financial performance, generating US$157.1 million in revenue and US$53.2 million in adjusted EBTIDA. Bottomley highlighted GTI's favourable balance sheet relative to its peers and its presence in Illinois and New Jersey as key factors that investors should keep an eye on.

"We believe GTI’s exposure in Illinois is one of the most material value drivers for the company at this time." - Matt Bottomley

CANNABIS SPOT PRICE: $5.93 per gram -- This week's price is up 0.3 per cent from the prior week, according to the Cannabis Benchmark’s Canada Cannabis Spot Index. This equates to US$2,059 per pound at current exchange rates. 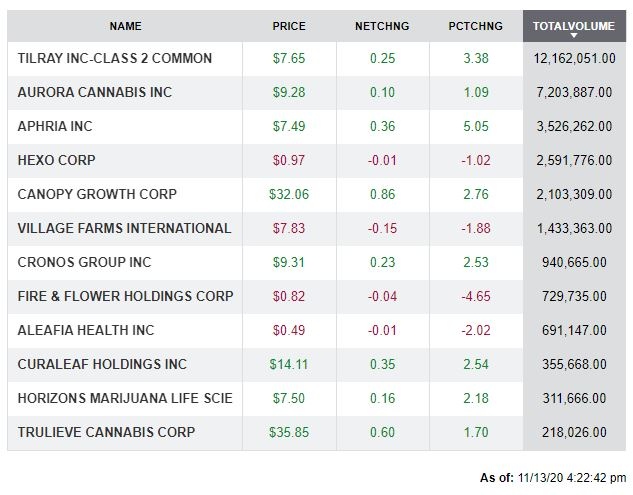