Canada’s cannabis sector is in the midst of a job boom. Employment in Canada’s cannabis industry has nearly quadrupled in the past year, according to Statistics Canada which released its annual profile of federally-licensed cannabis producers on Thursday. StatsCan reported Thursday that there are 9,200 people currently working in the Canadian cannabis sector, up from 2,630 in the fiscal 2018 year and 1,438 in fiscal 2017. Of those jobs, about 60 per cent of those cannabis industry workers were tasked with cultivation, harvesting, processing, manufacturing and administration duties. Another 20 per cent were identified to work in packaging, marketing, sales.

Canadian firms are starting to catch up to the U.S.’s robust legal cannabis delivery industry. ParcelPal announced on Thursday it secured a distribution agreement with Aphria to deliver medical cannabis to patients. Patients will be able to buy their medical pot from Aphria's online store and get it shipped to them anywhere they want. The company will begin its service in Calgary before expanding it to other cities, it said in a release. The deal was celebrated by MADD Canada as it assists eliminating impaired drivers from roadways by removing their need to drive to or from cannabis stores for product.

TerrAscend shares rose Thursday after the company reported record second-quarter revenue and boosted its yearly guidance. The cannabis producer said it generated revenue of $17.6 million in the quarter, up 21 per cent from the prior three-month period, while booking a net loss of $21.1 million or 37 cents per share. On a pro forma basis, the company said it generated $42 million of revenue in the second quarter, or over $168 million on an annualized basis once including completed and pending disclosed acquisitions. TerrAscend said it also expects revenue to exceed $141 million this year, up from the $135 million it previously announced on April.

$7.2 billion
-- The value of shares exchanged for Canopy Growth between May 1 and August 22, the largest such amount in the cannabis industry during that period. 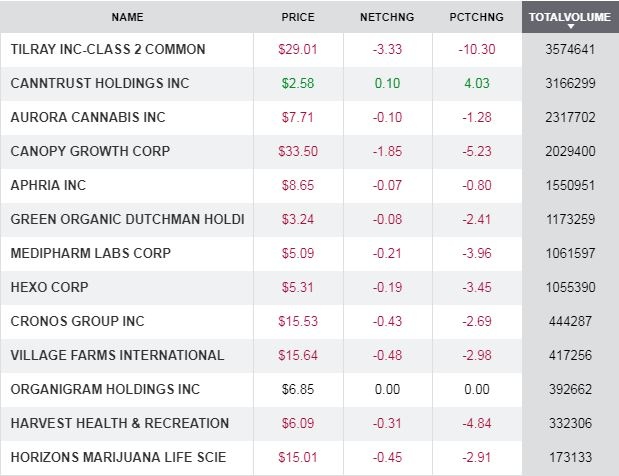