It didn’t take long for most Cannabis 2.0 products to sell out on the OCS website

The launch of Cannabis 2.0 products on the Ontario Cannabis Store’s website was met with overwhelming demand, with most of the newly-available items selling out by the end of the day. An OCS spokesperson told BNN Bloomberg that more than 2,000 people placed orders within the first hour that cannabis-infused edibles and vape products became available for sale. The website sold out of gummies or “soft chews” within the first 30 minutes of availability. The OCS plans to wait until other physical retailers will be allotted an equal amount of new supply before replenishing their own website. The new products represent a potential new windfall for the country’s pot producers, who have been stymied over the past year with softer-than-expected revenue from dried flower products.

WeedMD laid off “under 10” employees recently in a move aimed at streamlining operations following the company’s acquisition of Starseed Medicinal last month, the company’s CEO confirmed to BNN Bloomberg. WeedMD CEO Keith Merker told BNN Bloomberg in a phone interview that the layoffs were largely Toronto based and focused in the company’s marketing and investor relations departments. “This is a matter of two companies coming together and a matter of optimizing. We’re working on finding the all synergies that we can find,” Merker said. The company has nearly 300 staff following its merger with Starseed, which also announced Thursday it will be the preferred supplier of medical cannabis to the 4,000-member strong Labourers’ International Union of North America.

Shares of medical cannabis manufacturer Tetra Bio Pharma soared on Thursday after Health Canada approved one its products for over-the-counter purchase. The Deep Dive reports that Health Canada approved the company’s Terpacan Back & Muscle Pain topical product, one of the first items approved by the country’s regulator for usage in the legal cannabis market. The product is aimed at pain relief and was also assigned a drug identification number, the website reports.

Organigram’s stock extended its gains this week after the cannabis producer announced a supply agreement with Loblaw’s Shoppers Drug Mart pharmacy chain. Organigram will provide medical cannabis for Shoppers’ online platform over a three-term period with a potential extension with two additional years. Under the terms of the agreement, Organigram will provide Shoppers with a wide range of cannabis products including dried flower, oils and other future derivatives as they become available, the company said in a statement. There are already a dozen suppliers that provide patients with medical cannabis under the Shoppers banner including Aphria, Tilray and WeedMD. Organigram shares are up a whopping 60 per cent over the past five trading days.

71
-- The number of “Cannabis 2.0” vape and edible products available on the first day of sales on the Ontario Cannabis Store’s website. 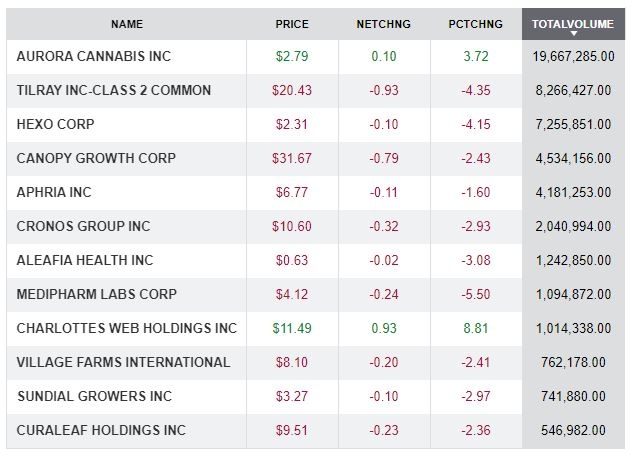