Cannabis prices on the illicit market continue to undercut the legal sector, with the difference between the two markets widening to the second-highest amount since Statistics Canada began compiling crowdsourced data in 2018. The average price of cannabis in the illicit market during the fourth quarter of 2019 was $5.73 per gram, while the legal market was $10.30, according to StatsCan. The resilience of the illicit cannabis market is likely to weigh on the industry as it attempts to find a way out of its current slump. Bill Kirk, executive director at MKM Partners, said the growing price gap between the illicit and legal markets will likely limit the growth of the legitimate cannabis sector and hurt its chances for profitability.

U.S. cannabis operator MedMen Enterprises CEO Adam Bierman responded to rumours about the company offering stock in exchange for payment it owes to certain vendors. Bierman confirmed the rumours, noting that “there’s a lot of pain” currently going on within the company as it aims to find a pathway toward sustainability. Bierman, who spoke to Green Market Report, said MedMen is approximately 30 days away from exiting its restructuring and that the company’s “cash position is very healthy, our balance sheet is strong.” Bierman also said the company doesn’t have plans to sell the Illinois dispensaries it obtained from its failed transaction with PharmaCann, noting it averages 200 transactions per hour.

An Illinois cannabis dispensary is set to open the first legal consumption lounge in the state after receiving approval from city officials, the St Louis Post-Dispatch reports. HCI Alternatives, based in Springfield, Ill., applied to open a consumption lounge connected to its dispensary location although an opening date has not yet been determined. Illinois legalized sales of recreational cannabis on Jan. 1 and while sales have been brisk, there are restrictions on where people can consume cannabis legally.

Canadian cannabis retailer Meta Growth has obtained agreements with two Ontario lottery winners to open legal pot shops, the company said in a statement on Thursday. Meta plans to open new stores in Toronto as well as Kitchener, adding that it has more than 10 “class A” sites in Ontario which it intends to operate as corporate shops. The company says it has already begun construction for those outlets ahead of receiving official licensing from provincial regulators.

38.2%
-- The portion of the $1.5 billion total Q3 Canadian cannabis spending that went to the legal market, according to Statistics Canada. 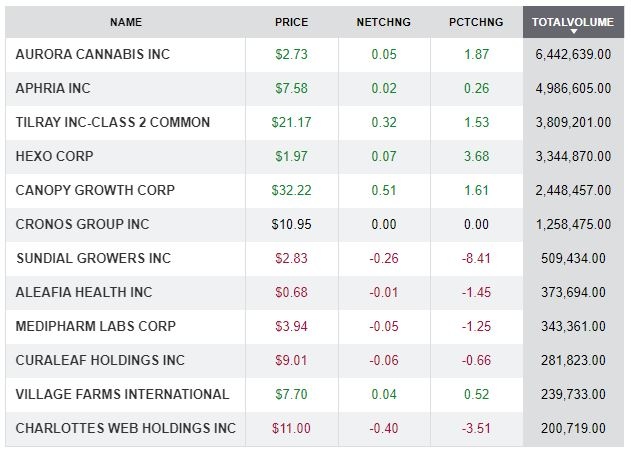