Aphria, Organigram 'not out of the woods just yet' as earnings due

Cannabis firms in the U.S. are increasingly looking to import pot earmarked for research or scientific purposes after encountering difficulties finding a suitable domestic supply. Bloomberg News reports that California-based Biopharmaceutical Research legally imported cannabis from Dutch producer Bedrocan International in order to better understand the plant, but did so after failing to find a similar product within the U.S. Due to the federal illegality of cannabis, researchers have access to only one government-approved farm at the University of Mississippi that grows pot for scientific purposes. The U.S. Drug Enforcement Administration said in August it plans to look at proposals for new regulations for growing marijuana for scientific and medical research, but those initiatives have stalled in recent months.

What does flipping a coin and pot company executives industry commentary have in common? According to MKM Partners analyst Bill Kirk, they’re pretty much the same thing. Kirk looked at every earnings transcript since 2017 for six Canadian pot producers and found that of the 948-odd forecasts made by executives, only 29 per cent of them were correct. Another 28 per cent were found to be wrong, while the jury is still out for the remaining 43 per cent of prognostications. Out of all the companies surveyed, Tilray had more correct predictions than any other company, with 72 per cent of its forecasts to be deemed accurate. Meanwhile, executives at Hexo were found to be correct only 17 per cent of the time.

Canadian grocery chain Loblaws and pot giant Canopy Growth are among the eight companies that responded to the New Brunswick government’s request for proposals for the operation, distribution and sales of recreational cannabis in the province. New Brunswick is looking to sell its 20 provincially-owned cannabis stores after the businesses operated at a loss. Other retailers who expressed interest include Fire & Flower, Kiaro Brands and YSS Corp. After the proposals will be evaluated by a third-party fairness monitor, the government could announce the winner of the RFP by this spring.

B.C.-based cannabis retailer and producer Westleaf announced several executive departures from the company on Monday. Westleaf said that the company’s president and co-founder Scott Hurd has resigned effective Jan. 24, while chief development officer Shon Williams and chief operating officer Ben Kaanta will be departing, effective immediately. The company said the resignations, which total nine staff, will result in $1.3 million in cost savings as it looks to achieve profitability. Canaccord Genuity analyst Kimberly Hedlin said in a report to clients that the staff changes do not come as a huge surprise and are a prudent strategy ahead of the start of cultivation operations in Battleford, SK.

Fire & Flower Holdings said it reached its target of opening and operating 45 cannabis retail stores in Canada ahead of the end of its current fiscal year next month. The announcement, which currently pegs Fire & Flower as the largest cannabis retailer in the country, comes as the company opens nine new stores in Alberta. It continues to eye the Albertan retail market while also focusing on Ontario, where open licensing has commenced. Stifel-GMP analyst Justin Keywood said he expects Fire & Flower to open 85 stores by the end of this year and forecasts the company to reach break-even EBITDA by then as well.

Trulieve is suing Grizzly Research after the short-seller research firm published a scathing report that detailed numerous allegations the Florida-based cannabis operator denies about its operations. The Tallahassee Democrat reports that Grizzly Research alleged in its report that Trulieve over-inflated the value of its cannabis crops, obtained its medical marijuana license through illegal means and failed to disclose ties to an ongoing federal corruption probe that involves the spouse of the company's CEO. “This lawsuit represents Trulieve's firm stance against such false and misleading reports,” Trulieve CEO Kim Rivers said in a statement. Trulieve also released a four-page rebuttal against the Grizzle report, identifying several examples of incorrect reporting and refuting numerous allegations.

$121,046,054
-- The amount of cannabis private retail sales in Canada in December, up 11 per cent from November, according to Cova Software, which provides point-of-sale services for North American cannabis retailers. The company projects sales from the 595 private stores open across Canada, an increase from 520 stores operating in the prior month. 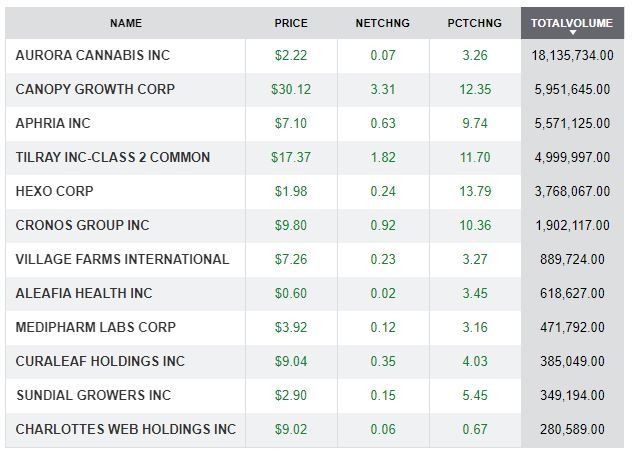