Why one analyst says layoffs are inevitable for Canopy Growth

“I guess I'm the latest carnage,” Terry Booth said, with a hearty laugh. The former Aurora Cannabis CEO spoke with BNN Bloomberg in an exclusive interview a day after the company announced he would step down from his role. Booth later clarified that he still sees that ‘carnage’ – alluded to earlier in a previous interview with BNN Bloomberg – that there’s going to be a lot of companies in the Canadian sector that can't grow cannabis for less than the price Aurora is selling it for. Booth reflected on the time he spent at Aurora and acknowledged it was time to move on after a seven-year run. “It’s time for more of a button-up CEO, not a growth CEO,” he said.

Canopy Growth’s new CEO David Klein wants to change the pot giant’s playbook. In his first public appearance since taking on the role last month, Klein said he is focusing mainly on improving Canopy’s connection with its consumers, ensuring that there is more “discipline in the organization," and defining a path to profitability. “I want to focus the business on the consumer,” Klein said when asked by BNN Bloomberg what he needs to do for Canopy to become profitable. Klein wouldn’t elaborate on whether Canopy would shutter facilities, other business units or layoff staff, but tough decisions will be made after starting a sweeping review of the entire company in one of his first orders of business since becoming CEO. Klein’s comments come as Canopy reported better-than-expected fiscal third-quarter results on Friday despite reporting another steep quarterly loss. Canopy said it made $123.8 million in net revenue in its fiscal Q3 while reporting an adjusted loss of $91.7 million.

Canopy Rivers, the venture capital arm of Canopy Growth, reported Q3 results on Friday with a net loss of $2.7 million, or one cent per share, while withdrawing its full-year guidance amid multiple headwinds in the cannabis industry. Canopy Rivers said the various uncertainties in the industry such as unanticipated licensing delays, challenges in operating large-scale cannabis greenhouses, and wholesale cannabis price declines led the firm to withdraw its 2020 outlook. The company reported $1.8 million in operating income of, mainly from royalties and debentures from some of its portfolio companies such as Agripharm, James E. Wagner Cultivation and Tweed Tree. “We continue to believe that these headwinds for the cannabis sector are temporary,” the company’s CFO said in a statement.

Embattled cannabis producer CannTrust Holdings announced Thursday it has appointed a new chief executive officer, while providing an update on how it plans to get its licence to grow cannabis again. CannTrust said in a statement that the company's board appointed Greg Guyatt as its CEO, replacing interim chief Robert Marcovitch who will return to his role as chairman of the company. CannTrust also said that it plans to submit documents to Health Canada on Friday that outline the company's remediation plans to have its licence to grow and sell cannabis at its Niagara, Ont. facility reinstated. The company added it expects to finish its remediation activities for its Vaughan, Ont. facility in the second quarter of the year. CannTrust now has $167 million in cash at the end of last month, down from $175 million in the prior month, the company said.

Former Goldman Sachs executive Mike Blum is the latest high-profile hire that is heading to a cannabis company, Bloomberg News reports. Blum announced that he’ll be the chief technology officer at U.S. cannabis provider PharmaCann after abruptly quitting the bank last week. At PharmaCann, Blum will reunite with some of his former colleagues from electronic-trading firm KCG Holdings. PharmaCann began a half-decade ago and says it provides “top-quality cannabis products to improve people’s lives.” It recently ended a merger deal with MedMen Enterprises last year.

$6.31
-- The price of a gram of cannabis in Canada, down 1.3 per cent from the prior week, according to the Cannabis Benchmark’s Canada Cannabis Spot Index. This equates to US$2,156 per pound at current exchange rates. 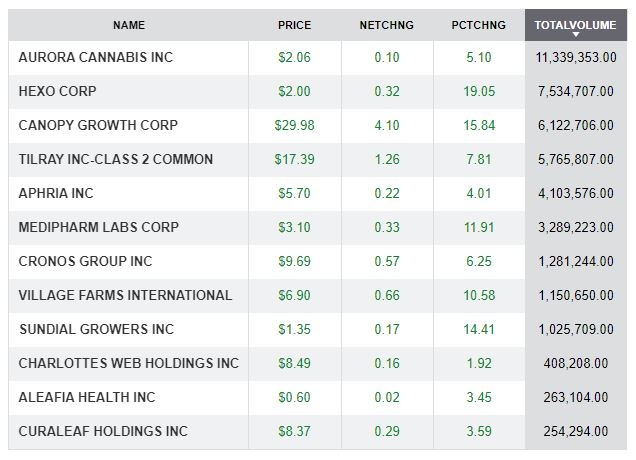