One week after cannabis producers blamed another quarter of sluggish sales on a scarcity of pot stores operating in Ontario, relief may be on the way. BNN Bloomberg exclusively reported that the Ontario government is considering a plan that would abandon the maligned lottery process that has left it with only two-dozen legal pot shops. Instead, the government is planning to move to a system as early as January that could lay the groundwork for up to 1,000 stores in the province, according to a person directly familiar with the matter. Provincial officials have proposed moving to an "open allocation" system for issuing pot store licences next year. That would allow would-be shop owners to simply apply online and pass a series of background checks to sell legal cannabis in a bricks-and-mortar shop in the province. A decision is expected to be announced in the coming weeks, the person said.

Ontario’s Finance Minister says the provincial government isn’t to blame for the cannabis industry’s weak sales in the face of a limited number of retail stores. “The [criticisms are] not fair; but it doesn’t surprise me. Sometimes business people look for all kinds of reasons why things don’t work out,” Rod Phillips told BNN Bloomberg’s Paige Ellis Thursday. Phillips said he’s comfortable with the progress the province had made on its rollout of cannabis, given the sensitive nature of it. When asked about Ontario’s plans to start issuing cannabis store licences under an open allocation system, Phillips said the announcement will be made “when conditions are right.” “Our priority is to make sure that we have safe distribution and that we tackle the black market,” he said.

Cannabis shares have soared in the past few days, leading to further calls that the industry may have finally reached its bottom. Bloomberg News reports an index that includes several major cannabis companies saw its biggest three-day advance since the beginning of the year with companies like Canopy Growth, Aurora Cannabis and Cronos Group reporting double-digit gains. Neil Selfe, founder and CEO of Toronto-based investment bank Infor Financial Group, says cannabis companies are likely to see a 20 per cent bounce from hitting multi-year lows in recent weeks. Some of the gains are attributed to investors unwinding bearish bets. Other signs of optimism may include a recent bullish report on Canopy Growth from a Bank of America-Merrill Lynch analyst as well as BNN Bloomberg’s report on Ontario looking to issue new cannabis store licences early next year.

How cannabis companies are increasingly at risk of underwater convertible debentures

Cannabis companies issued billions in convertible debentures in recent years, but the recent rout in these formerly high-flying stocks could mean some of these security instruments are now underwater, Bloomberg News reports. That means these cash-starved cannabis firms are now forced to restructure their debt or pay a bill they didn’t expect to settle up so soon. Converts are a form of interest-paying debt that can be converted into stock at a set price. Investors buy them when they expect a company’s stock to rise, while a firm would have to repay the balance if they trade underwater. While there’s still time for converts to be cashed in -- many of the cannabis-focused instruments aren’t due to mature until 2023 -- some companies like Aurora Cannabis are having to come to terms with restructuring its convertible debentures.

2.5 tons
-- The amount of cannabis sold and exported out of Canada to the black market, according to a report published by Public Safety Canada. 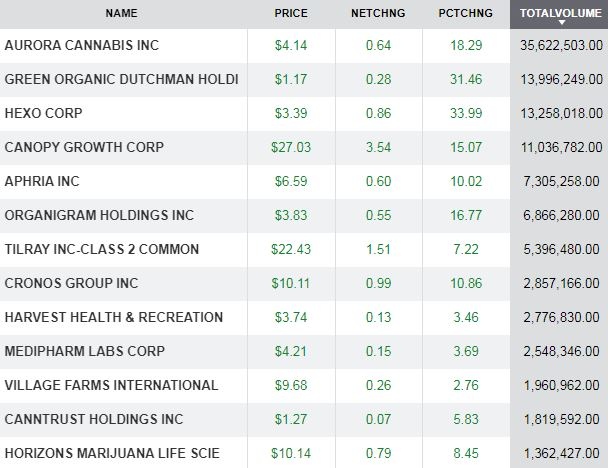