Ontario cannabis retailers are cheering the Alcohol and Gaming Commission of Ontario's decision to double the amount of pot shops it will authorize and licence in the province to 40 each month, starting this fall. The decision, made late Tuesday, will likely ensure that many of the retailers who have been burning thousands of dollars and waiting months for licence approvals will be able to open their doors sooner than later. Sessions Cannabis CEO Steven Fry told BNN Bloomberg he expects that some of the company’s 27 stores still waiting for approval to see their licence applications advanced by about six months. Desjardins analyst John Chu expects the announcement to see Ontario more than quadruple the amount of pot shops in the province to 700 by the end of next year.

Weedmaps has responded to a letter signed by several prominent cannabis retailers asking the Royal Canadian Mounted Police to enforce illicit market activity on the online platform. A Weedmaps spokesperson stated in an email to BNN Bloomberg that the transition from legacy to regulated markets is "inherently complex" and providing accurate information is "crucial." The website also stated it plans to work with federal and provincial governments to ensure it can provide safe and convenient access to cannabis for patients and consumers. However, Weedmaps didn't specify whether it plans to remove the listings of 1,500-plus illicit cannabis operators that the retailers' letter to the RCMP highlighted.

Cannabis beverage maker Tinley said it has plans to enter the Canadian market after securing an agreement with a domestic manufacturer for the company's pot-infused drinks. The company said the agreement is subject to certain conditions, including obtaining proper licensing, for manufacturing to begin by the end of October. Tinley is also working with a Canadian consultant to ensure that it can properly produce its U.S. beverages for the Canadian market - one which offers greater restrictions on packaging and labelling than the U.S. Tinley added that its Canadian sales agent has received "significant interest" from two provincial wholesalers to distribute its products to consumers. 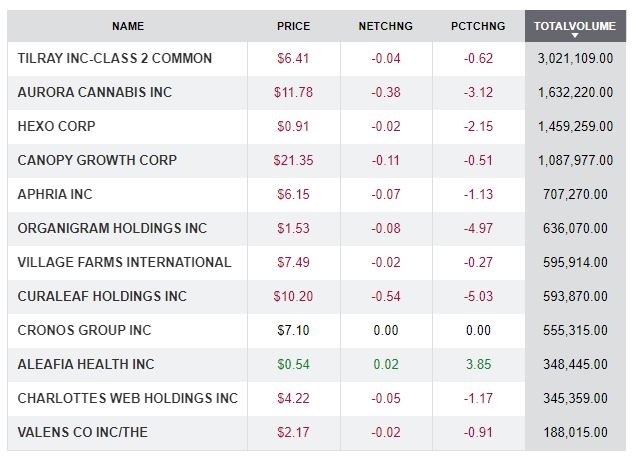