Grabbing a pot drink at an Ontario bar or dining on some cannabis-infused salad dressing may one day become a reality after the provincial government said Monday it is soliciting feedback to explore future policies that could see public consumption of cannabis in restaurants, lounges or outdoor festivals. While it is unknown how much economic impact cannabis consumption lounges could have in Ontario, pro-pot advocates have argued allowing people to consume legal pot in a public venue would improve public awareness of the drug while reducing any stigma associated with it. “We want to hear what Ontarians have to say on lounges, cafes, that kind of thing. It’s not really predetermined that we’ll make any decisions at all but we want to hear from the public,” said Ontario Attorney General Doug Downey in a phone interview with BNN Bloomberg.

Cannabis returns emerging as a key issue between producers, retailers and consumers

What happens to those cannabis products when wholesalers don’t want them or customers don’t want to buy them? In the little-discussed world of cannabis returns, it's hard to know how common this actually is although it’s increasingly clear that it is more of an issue between retailers and wholesalers than consumer complaints. One consultant told The Canadian Press that "we are in the process of seeing the first wave of returns,” while the Ontario Cannabis Store said recalls, empty containers and dry products make up the top reasons customers opt to ship their purchase back to the government-run store.

Canopy Growth, the biggest pot company in the world, is getting out of the wine business. Well, kind of. The Smiths Falls, Ont.-based company said in a statement on Monday it is leasing a vineyard it owns to Niagara College, which will turn the facility into a “teaching winery”. Canopy acquired the vineyard in May 2019 as it anticipated needing the land for potential expansion of a nearby greenhouse that grew cannabis. Terms of the leasing agreement were not disclosed.

When it comes to ‘dabbing,’ most people are a bit unsure how that applies to cannabis. Except for Generation Z and the Millennial cohort, according to a new Axios/SurveyMonkey poll. According to Axios, about half of the 18- to 24-year-olds surveyed have either used a dab or know someone who has. That number fell to 32 per cent among 25- to 34-year-olds and continued to decline as respondents got older. Dabbing refers to smoking a small concentration of a highly concentrated form of THC – the chemical in marijuana that get you high – and not the popular teen dance. A typical joint is usually about 25 per cent THC while a dab can be as much as 90 per cent. Perhaps more importantly, a majority of respondents in every age group said they support legalizing marijuana for recreational use across the U.S. SurveyMonkey polled 2,726 adults between Jan 24 to Jan 28 across the U.S. on their views on cannabis.

700
-- The number of applications received by the Alcohol and Gaming Commission of Ontario for retail operator licences, according to the provincial government. 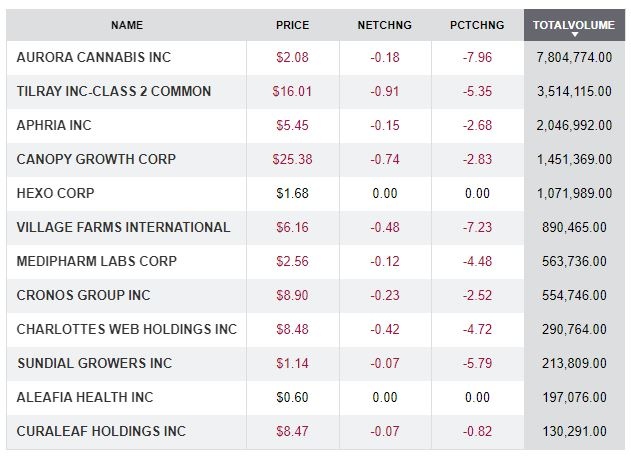