It was another day of disclosures for CannTrust. The embattled cannabis producer said late Thursday that the Ontario Securities Commission gave notice that "an investigation has been opened into matters and parties related” to the company. CannTrust also stated it expects to miss the Aug. 14 filing deadline for its latest financial report and it has also applied for a management cease-trade order. Meanwhile, BNN Bloomberg’s David George-Cosh reported that CannTrust’s board of directors is comprised of a number of family and other pre-existing relationships that raise questions about the independence of its senior executive staff. Mark Dawber, who became chair of the company's independent committee last week, also serves on the board of Gencan Capital, where Mark Litwin – another CannTrust board member – serves as the firm’s president. Also, Litwin’s wife, Beth, is the niece of interim CannTrust chief executive officer and former chair of the company's independent committee Robert Marcovitch.

Shares of Aphria surged after the Leamington, Ont.-based cannabis producer beat expectations on virtually all metrics when it published its fiscal fourth-quarter results. Aphria earned $15.8 million in the quarter ended May 31 on revenue of $129 million; both figures were above analyst expectations. Aphria’s interim CEO Irwin Simon stated the improved quarterly figures were the result of several internal changes the company made since the beginning of the year after the publication of a short-seller’s report. Simon stated CannTrust’s woes have not been good for the industry as a whole, but that the company has “some great assets” and he “always looks for great opportunities.”

Toronto-based cannabis producer Cronos Group made its first foray into the U.S. market on Friday, acquiring CBD businesses from Redwood Holding Group LLC - including the high-end brand Lord Jones - in a US$300 million deal. Shares of Cronos rose sharply after the cash-and-stock deal was announced. Redwood sells CBD-infused topical products such as body lotion and edibles under the Lord Jones brand both online and at retailers in the U.S. The deal is one of the first Cronos has made since it sold a minority stake to tobacco giant Altria Group Inc. for about US$1.8 billion, funds that would be used to propel the company’s CBD business.

El Salvador could be the next country to legalize medical marijuana. A lawmaker in the Central American country introduced a bill in mid-July to legalize cannabis for medical use, as well as legalizing domestic production, according to The Cannabis Wire. The bill is awaiting recommendation from several of the country’s ministries before moving forward to a vote. Cannabis Wire said that if the bill becomes law, patients would be required to obtain a special medical prescription and register with a national medical agency for a one-year licence to consume the medical product.

New Brunswick’s chain of government-owned cannabis stores continues to post steep losses, the CBC reported. Cannabis NB said it lost $2.2 million in the first quarter of its current fiscal year, which comes after the organization lost $11.7 million in its abbreviated 24-week first year. A Cannabis NB spokesperson told the CBC “the loss gap is decreasing” despite declining weekly sales figures. Sales were an average of $700,000 per week during the first quarter, down from the $784,000 per week made during the first fiscal year.

$7.29
-- The price of a gram of cannabis in Canada, up 5.5 per cent from the prior week, according to the Cannabis Benchmark’s Canada Cannabis Spot Index. This equates to US$2,510 per pound at current exchange rates. 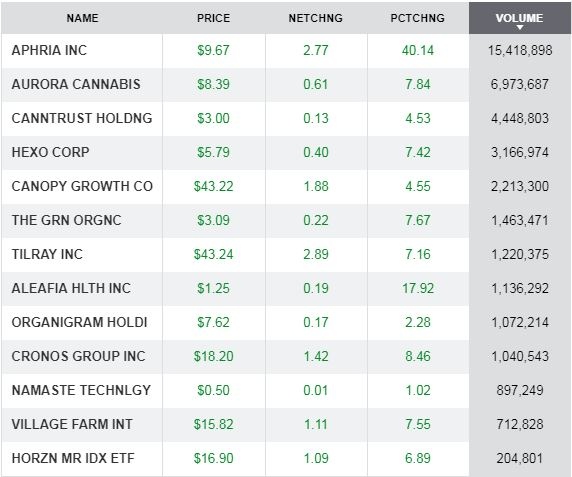