It’s been a week to forget for the cannabis sector. After more than a dozen Canadian-based pot companies reported quarterly results over the past five days, declining revenues and ongoing losses resulted in a total of $5 billion in market capitalization disappear for the top five cannabis companies on the market, BNN Bloomberg’s David George-Cosh reports. Meanwhile, half of the week’s quarterly results reported sequential revenue declines. Analysts widely believe that the worst isn’t over, despite the upcoming launch of next-generation cannabis products in December. Cannabis producers are increasingly experiencing financial trouble. One industry consultant who declined to be named given his involvement in the sector said he expects 30 to 40 per cent of pot companies will soon become distressed, go bankrupt or be acquired by another company.

Quebec-based Hexo said unlicensed cannabis was grown at its Niagara facility shortly after it acquired the building earlier this year. Hexo said its management immediately “ceased cultivation and production activities in the unlicensed space” upon discovering the unlicensed plants and notified Health Canada instantly. A previous inspection by Health Canada in February 2019 found no concerns about the cannabis grown in that particular room, reinforcing Hexo management’s belief that the room was indeed licensed to grow cannabis. Hexo said the regulator was “satisfied with Hexo management’s corrective actions” and that the product grown in its facilities meets quality standards and operating procedures. The Niagara facility, acquired in the company’s deal to buy Newstrike Brands for $263 million, was shut down last month.

Aurora Cannabis eyes profitability amid rough Q3, but doesn’t provide outlook on when it will notch profits

Aurora Cannabis will be a profitable company, according to Michael Singer, the cannabis producer’s executive chairman – the only problem is no one can say when exactly that will happen. Singer’s remarks come after Aurora reported net revenue of $75.2 million, below the analyst estimates, while Canadian recreational market fell 33 per cent to $30 million in the company’s most recent quarter. Aurora also said it has stopped construction at a facility in Denmark, saving approximately $80 million over the next year, as well as another Alberta-based facility. The company also reached an agreement with its investors who held US$155 million of its March 2020 convertible debentures. “It has now become a core focus of our business to reach that [profitability] milestone as quick as we can,” Singer told Bloomberg News. “We believe because of our margins and our low cost of production that we’re in a unique position to be able to deliver that to the market quicker than any of our peers.”

Shares of The Green Organic Dutchman Holdings plunged after posting a third-quarter loss amid rising costs from its expansion towards commercial production. TGOD said it lost $20.1 million in its third-quarter, or a loss of seven cents per share for the quarter ending Sept. 30, up from a loss of four cents in the same quarter last year. Earlier on Thursday, TGOD said the company signed arrangements for up to $103 million in funding which consists of a sale-leaseback of its Ancaster, Ont. facility. The producer said it spent $104 million in capital during the third quarter, including the continued construction of its facilities in Ontario and Quebec.

Auxly Cannabis is heading to the great outdoors. The Toronto-based cannabis company said its Robinsons Cannabis subsidiary will begin growing outdoor cannabis on a 158-acre parcel of land in Nova Scotia’s Annapolis Valley, subject to licensing. Auxly said in a statement that the Robinsons outdoor grow will “use a range of proprietary genetics” as well as apply growing techniques traditionally used in the fruit crop production and wine industries. Auxly said it expects to obtain an outdoor cultivation licence from Health Canada in Q1 2020, and should spent approximately $15 million to build out the facility. Yield is estimated to be 200 kilograms per acre, the company added.

U.S. cannabis retailer MedMen Enterprises is laying off 190 staff, while selling some non-core assets, including the sale of its stake in Treehouse Real Estate Investment Trust, in an effort to reach positive earnings before interest, taxes, depreciation and amortization by the end of 2020. Bloomberg News reports that MedMen will sell stakes in some of its brands for net proceeds of US$8 million and engaged Canaccord Genuity to “explore strategic alternatives” for its operations in non-core markets. New store openings will also slowdown next year, as the company focuses on retail outlets that could make more than US$10 million in revenue within the first 12 months.

$6.47
-- The price of a gram of cannabis in Canada, down 4.3 per cent from the prior week, according to the Cannabis Benchmark’s Canada Cannabis Spot Index. This equates to US$2,219 per pound at current exchange rates. 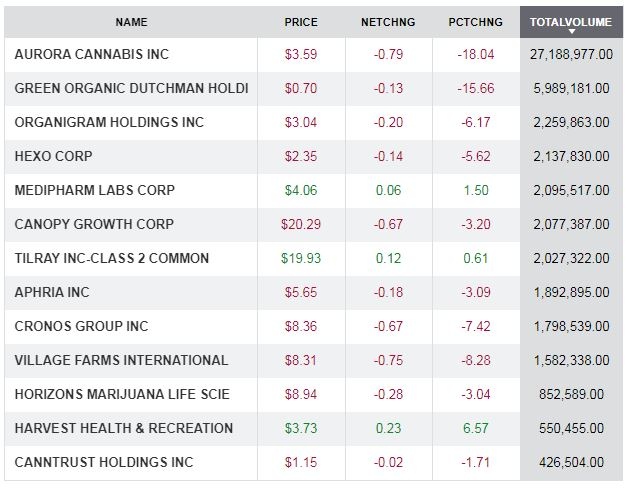