Legal pot gets slightly cheaper, but so does black market: StatsCan

The cost of a gram of legal cannabis is getting slightly cheaper, but so is the same amount bought from the black market, according to figures published by Statistics Canada on Wednesday. According to crowdsourced pricing figures compiled by StatsCan, a gram of cannabis purchased legally cost $10.23 in the third quarter, down 3.9 per cent from the previous three-month period. Meanwhile, the price for a gram of pot bought in the illicit market fell 5.9 per cent to $5.59. In fact, black market cannabis continues to be cheaper than its legal counterpart. The price differential between the two reached 45 per cent in the third quarter, from a gap of about 35 per cent in the fourth quarter of last year, StatsCan data showed.

Cannabis sales in Canada expected to hit $1.1B in first year of legalization amid rise in legal production

Sales of cannabis in Canada are a fraction of what the Canadian government projected, as estimates suggest that cheaper black market pot is proving irresistible for many consumers, BNN Bloomberg’s David George-Cosh reports. Canadian licensed cannabis producers are expected to have sold approximately $1.1 billion worth of legal pot – the equivalent of about 105,000 kilograms – in the first full year of legalization, according to an analysis of retail sales data by Cannabis Benchmarks. That’s far less than the 924,000 kilograms of dried flower equivalent Canadians are believed to consume each year. Further complicating matters are reports suggesting cannabis producers are harvesting enough marijuana to come close to hitting Canada’s annual demand. As of July, monthly legal pot harvests are north of 62,600 kilograms and “increasing rapidly” to that annual target, according to The Cannalysts Inc., an independent cannabis research firm.

Shares of The Green Organic Dutchman plunged Wednesday as the Toronto-based cannabis producer announced a review of financing alternatives after it was unable to find sources of new capital needed to help complete two growing facilities. TGOD is looking to secure about $160 million in bridge financing to allow it to finish building its two production facilities, and to provide working capital for inventory and receivables, the company’s CEO Brian Athaide told BNN Bloomberg. Athaide added he’s hoping to secure an asset-backed loan with a yield in the “low double-digits” with a non-traditional lender, and expects that financing to help the company reach cash-flow-positive status by mid-2020.

Sundial Growers addressed the filing of a class-action lawsuit that alleged violations of U.S. securities laws on Wednesday. The class-action lawsuit came after a Marketwatch article detailed how Sundial sent another cannabis producer poor quality pot that had to be returned back to the company. In its statement, Sundial stated the article “erroneously described a since-resolved commercial dispute” and that the returned product was a “a fraction of the 554 kilograms erroneously quoted in the article.” Sundial added the company is compliant with Health Canada regulations, noting an inspection that took place last month.

Despite a lack of banking reform passed into law, U.S. banks are increasingly working with legal cannabis companies. MJBizDaily reports that the cannabis industry experienced a 62-per-cent rise in the amount of banks that agreed to work with the sector in the third quarter of 2019, compared to the same period a year ago. The SAFE Act, which would allow banking and insurance companies to work with cannabis-related businesses without fear of federal punishment, was recently passed in the U.S. House of Representatives. However, its passage in the U.S. Senate remains uncertain.

68.8%
-- The amount of cannabis consumers in Ontario who purchased their legal pot from the province’s online retailer in the third quarter, according to Statistics Canada. That’s down from 95.8 per cent of all purchasers made in Ontario in the first quarter of 2019. 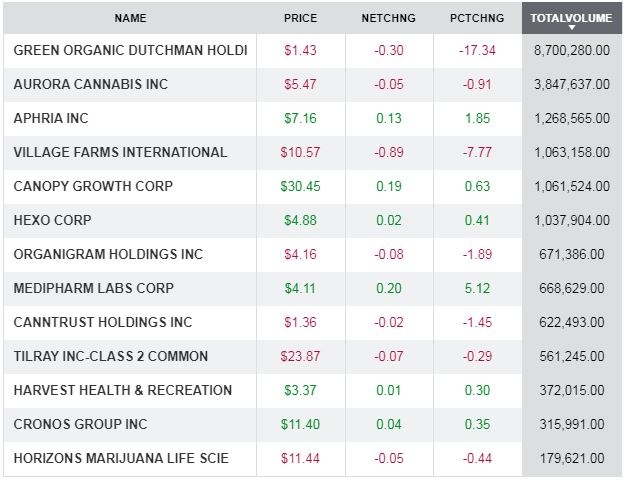