Cannabis legalization in the U.S. is emerging as a policy issue for the upcoming Democratic presidential primary after former vice-president Joe Biden said over the weekend that more work needs to be done to determine whether marijuana is a “gateway drug” or not. Biden’s opposition to cannabis legalization falls in stark contrast to many other Democratic presidential hopefuls who have advocated for further liberalization of the drug. Biden said he supports allowing states to determine their own cannabis policies, rescheduling the drug to allow for further research and remains opposes to legalization on the federal level. "It's a debate. Before I legalize it nationally, I want to make sure we know a lot more about the science behind it," Biden was reported to have said during a town hall in Las Vegas.

Michigan’s recreational cannabis market is ready for launch with about a dozen stores to be open in the U.S. state this December, according to MJBizDaily. The state is expected to see sales hit between US$1.4 billion to US$1.7 billion once the recreational market can mature, the website reports. However, finding a legal pot store open will be relatively difficult as nearly 80 per cent of the state’s municipalities have either opted out of having a cannabis dispensary within its jurisdiction or banned recreational pot entirely. The state’s recreational cannabis sales were expected to start in mid-2020 but regulators recently allowed Michigan’s existing medical marijuana dispensaries to allocate half of their inventory for adult-use sales on Dec. 1.

Acreage Holdings is buying a New Jersey-based cannabis company called the Compassionate Care Foundation, the company said in a statement on Monday. Terms of the deal were not immediately disclosed. In its statement announcing the deal, Acreage said the CCF operates one of New Jersey’s largest indoor growing facilities, specifically to grow high-quality dried flower products, and has the “operate three retail dispensaries” in the U.S. state. Eight Capital said in a morning report to clients on Monday that one of the CCF’s dispensaries in New Jersey recorded sales of US$4.9 million in 2018, and US$3.5 million in 2017.

Shares of Vancouver-based cannabis company Sunniva sank more than 40 per cent on Monday after it announced two executive departures on Monday, leading with the resignation of Kevin Wilkerson as president and well as its head of its U.S. subsidiary “for personal reasons.” Wilkerson was promoted to his roles back in July amid Sunniva’s strategic shift to focus more on its Californian operations after originally joining the company’s management team as chief operating officer back in Dec. 2018. Sunniva said it hasn’t yet announced a replacement for Wilkerson at this time. Additionally, Sunniva said Michael Barker, one of its directors, stepped down from his role on Nov. 15.

$17 billion
-- The amount of company value shed by Canopy Growth, still the largest pot company in the world, since April when its market capitalization reached $21 billion, according to Bloomberg. 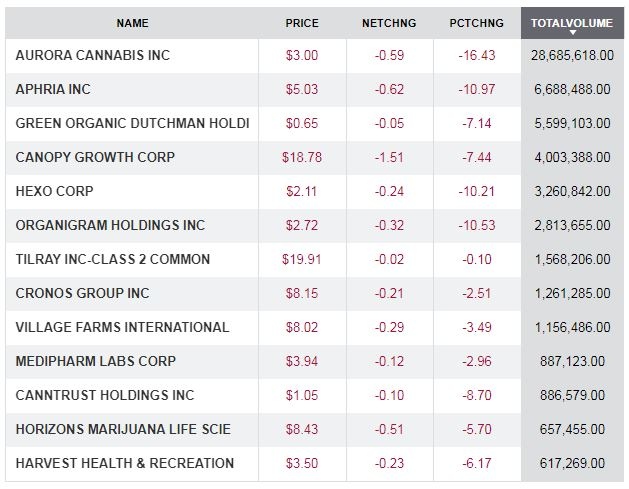