Should Canada's RCMP begin cracking down on Weedmaps for allowing illicit operators to advertise on the platform? That's what several cannabis retailers want after submitting a letter to the RCMP's top brass seeking stronger enforcement against Weedmaps in order to shut down the proliferation of illicit cannabis dispensaries and delivery services. Weedmaps features thousands of illicit cannabis providers across Canada on its website as well as some of the country’s legal pot shops, but doesn't designate any difference between the two, creating customer confusion according to the letter. Compared to their legal peers, illicit competitors on Weedmaps can operate relatively unfettered and aren't beholden to the same strict regulations licensed operators need to abide by. Weedmaps and the RCMP weren't immediately available for comment.

Supreme Cannabis announced plans last Monday to partially convert and amend the company's unsecured convertible debentures in an "an extraordinary resolution." The company said the conversion price for its outstanding 6.0 per cent senior unsecured convertible debentures it issued in October 2018 is now valued at $0.285 a share, from a previous amount of $2.85 a share. The outstanding amount of debentures owed is now $36.5 million, down from $100 million, the company added. Supreme will also issue 116.6 million for its debenture-holders, half of which will be subject to a four-month restriction before they can be traded.

Toronto-based Aleafia Health said Tuesday its German subsidiary has received the necessary permits and licenses to distribute medical cannabis products to pharmacies in the European country. Aleafia expects medical cannabis sales to begin in Germany later this month following approvals from the country's Federal Institute for Drugs and Medical Devices as well as from the local government in Cologne. Aleafia owns 60 per cent of its German subsidiary, with pharmaceutical wholesaler and logistics operator Acnos Pharma holding the remaining ownership stake. The company continues to seek EU-GMP certification for its facility in Paris, Ont., Aleafia said.

U.S. cannabis operator Planet 13 Holdings reported a second-quarter net loss of US$4 million amid a sharp decline in revenue as the COVID-19 pandemic weighed on the company's sales. Planet 13 said it made US$10.8 million in revenue in the quarter, down about 35 per cent from the same period a year earlier, as COVID-19 led to a temporary closure of the company's operations. As the company is based in Nevada, it is more sensitive to tourist traffic in Las Vegas than its other U.S. cannabis peers. Planet 13, which operates the largest cannabis dispensary in the world in Las Vegas, said its revenue in July and August hit record highs, surpassing US$7 million a month.

US$106 million
- The amount of medical and recreational cannabis sales in Oregon in July, according to Marijuana Moment. The figure is a record high and this is also the third consecutive month sales in the U.S. state surpassed the US$100 million mark. 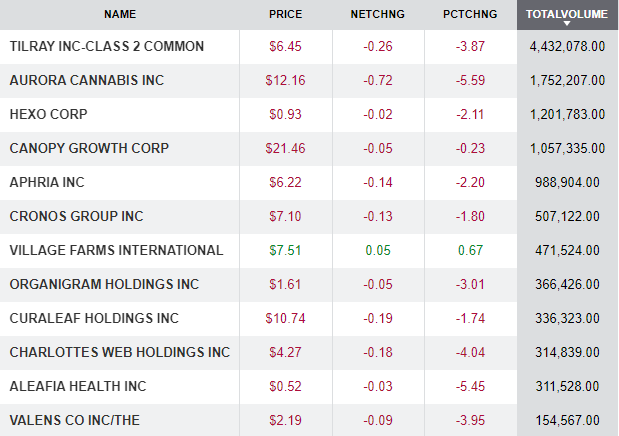