Quebec-based cannabis producer Hexo Corp reported disappointing first-quarter financial results on Monday, posting a slight improvement in sequential revenue while recording a $62.4-million net loss. The company did sell more legal pot in its Q1 than its prior quarter, but said its net revenue — which totalled $14.5 million — was impacted by lower prices amid an inventory backlog. Hexo also took a $25.5-million inventory impairment charge during the quarter and booked a corporate restructuring charge of $3.7 million tied to severance and other payroll-related termination costs. Hexo’s CEO Sebastien St-Louis said the company continues to talk to potential U.S. partners, but a deal is unlikely to resemble its joint venture with Molson Coors. RBC Capital Markets analyst Douglas Miehm said in a release to clients Hexo’s results display a “difficult path towards management's target for positive EBITDA in calendar 2020.”

Cannabis 2.0 sales off to a slow start with only one province selling new infused products

Sales of cannabis edibles got off to a slow start in Canada with Newfoundland and Labrador being the only province to sell new cannabis formats, which include vapes, edibles and beverages officially available for purchase today. Most other provinces are still far away from offering these new products, with Alberta and Ontario looking to have them on shelves in January. Still, that lack of availability in the first days of “Cannabis 2.0” shouldn’t be a surprise as most cannabis producers will be making their first foray into the cannabis-infused market with only a handful of products before rolling out their full portfolio over the next year.

Valens GroWorks expects revenues for its upcoming fourth quarter to be in the range of $27 million to $30 million, nearly double what the cannabis extraction company made in its third quarter, the company said in a statement Monday. The Kelowna, B.C.-based company also said its annual revenue should come in between $55 million to $58 million. It also stated it extracted over 24,400 kilograms of cannabis and hemp biomass in the fourth quarter of 2019, in line with the prior quarter. Lastly, Valens said it plans to buy back about five per cent of its outstanding shares over the course of 2020 to help maximize shareholder value.

Zambia has become the latest country to liberalize its cannabis laws after its government approved a proposal to legalize the production of marijuana in the African nation, according to the Lusaka Times. The website reports that cannabis usage in Zambia will be solely limited to exports and medical purposes, with companies required to pay US$250,000 in licensing fees to operate in the country. Cannabis remains illegal in most of Africa, although the continent’s legal cannabis industry could be worth more than US$7.1 billion by 2023 if legislation is introduced in a number of major markets, according to Prohibition Partners.

$6.39
-- The price of a gram of cannabis in Canada, down 1.5 per cent from the prior week, according to the Cannabis Benchmark’s Canada Cannabis Spot Index. This equates to US$2,197 per pound at current exchange rates. 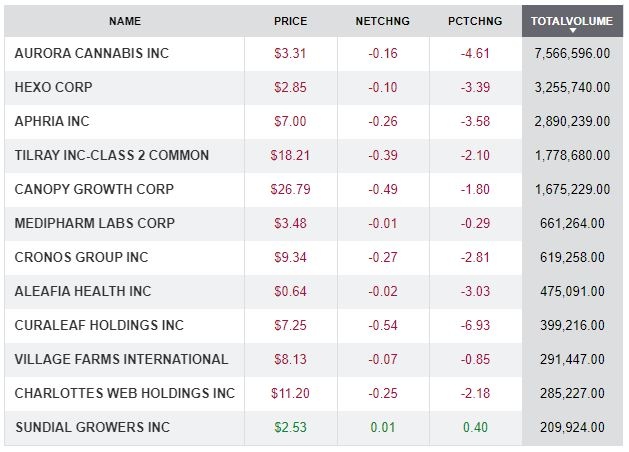