Shares of Aurora Cannabis plunged on Friday following the pot giant’s massive corporate update that revealed the company’s CEO, Terry Booth, is stepping down and that the pot producer will write down nearly $1 billion in assets. Not surprisingly, analysts are skeptical that Aurora can achieve its cost-cutting goals. At least four sell-side analysts downgraded their ratings on the company’s stock, while many also reduced their 12-month price targets on Aurora shares. BMO Capital Markets’ Tamy Chen said she remains cautious that Aurora can achieve positive cash flows by the time the company’s at-the-market equity program is used up.

U.S. cannabis operator Acreage Holdings announced Friday it has settled a number of financing transactions aimed at satisfying the company’s capital requirements. Acreage entered an agreement for a US$100-million credit facility with an unnamed institutional lender as well as a US$50-million private loan transaction that serves as collateral for that debt transaction. The company disclosed that Acreage CEO Kevin Murphy is also putting up $21 million of his own money as part of that collateral agreement. Acreage also completed a US$30-million private placement of special warrants with an option acquire a further US$20 million.

Despite the industry’s recent woes, there’s still a lot of available jobs in the cannabis industry. Leafly reports that there are  243,700 full-time-equivalent positions supported by the U.S. legal cannabis industry as of January 2020. That figure represents a 15-per-cent increase in labour activity in the cannabis sector from the previous year and shows that pot is the fastest-growing industry in America. Florida, Massachusetts, Oklahoma, and Illinois were some of the U.S. states found to make up the lion’s share of job growth in the legal pot space, Leafly said in its report.

Hexo switches auditors, announces board member to step down

Quebec-based Hexo released a corporate update on Friday, where it changed its auditor and lost a board member. Hexo said it has now retained PricewaterhouseCoopers as its new auditor, replacing MNP. Meanwhile, Nathalie Bourque announced her resignation from Hexo’s board after two years with the pot producer, effective on Friday. Hexo did not name a replacement for Bourque.

One of Australia’s biggest cities is getting its first facility aimed at hooking potential patients up with medicinal pot. Australian entrepreneur Gary Mackenzie hopes his new Releaf Clinic in Melbourne, scheduled to open in April, will be the first of 500 medical cannabis clinics across the country, according to The Age newspaper. While cannabis remains illegal for recreational use in Australia, doctors in the clinic will assess whether a person’s ailments could be helped by cannabis and then apply to the government for approval to prescribe a medical product, typically an oil.

-- The price of a gram of cannabis in Canada, up 0.2 per cent from the prior week, according to the Cannabis Benchmark’s Canada Cannabis Spot Index. This equates to US$2,187 per pound at current exchange rates. 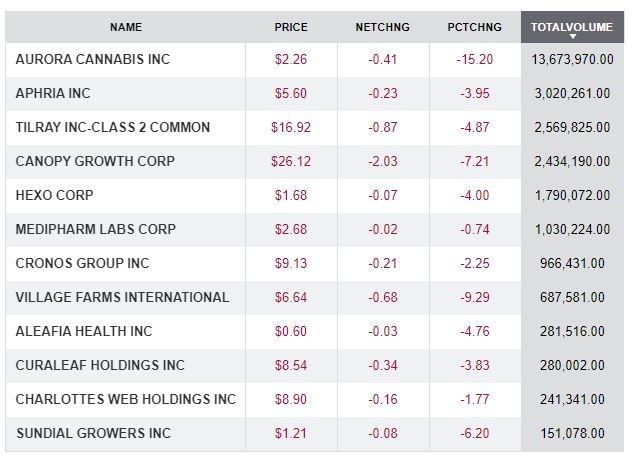