Aphria has inked a deal to provide Israeli medical-cannabis company Canndoc with dried bulk flower for a period that could span as many as seven years. During the first two-year term, Leamington, Ont.-based Aphria will send 3,000 kg of dried flower to Canndoc to be integrated into finished medical-grade pot to be co-branded by both companies. The deal includes mutual options for a pair of two-year extensions, as well as an additional one-year option.

Village Farms International will be partnering with Australia-based Altum International in its bid to target Asia-Pacific CBD and cannabis markets. The company announced Tuesday that it will acquire 6.6 per cent of Altum International. Altum has initially honed in on opportunities in Hong Kong, Australia and New Zealand, and plans to become commercially active in at least three more Asian-Pacific countries in the next 12 months.

California cannabis company Indus Holdings Inc. reported a net loss of US$4.8 million in its second quarter. The drop was associated with the cancellation of a pending asset acquisition in Nevada and Oregon. On a positive note, Indus generated US$9.9 million in revenue, which is a two per cent year-over-year growth and an increase of five per cent from their last quarterly results.

Cannabis hiring expected to pick up

Hiring in the cannabis industry is expected to pick up in the back half of this year, except at the executive level, according to a Bloomberg News report. The report cites recruiting platform Vangst, which found in a recent survey that 36 per cent of the 39 U.S. companies polled reduced their headcounts due to the COVID-19 pandemic, while another 33 per cent used temporary employee furloughs. However, the majority (68 per cent) plan to increase their workforce in the back half of the year with sales, marketing and IT staff being the biggest priorities. Hiring at the executive level, however, is currently a top-three focus in less than five per cent of companies surveyed, compared to 20 per cent at the beginning of this year. 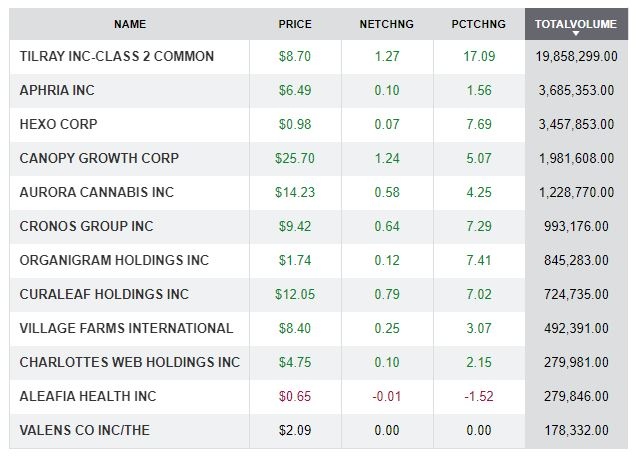