Supreme Cannabis laying off 15% of staff

Molson Coors reported its fourth-quarter and year-end results Wednesday, recording a profit of US$163.7 million, up from US$76.0 million in the same quarter a year earlier. However, buried in the release was an update on the company’s investment in Quebec-based cannabis producer Hexo. Molson said the value of the warrants it received from Hexo as part of its deal for Truss, their cannabis-infused joint venture, lost $14.3 million in value in the past quarter. Hexo awarded Molson 11.5 million warrants at $6 per share when they announced the joint venture in Oct. 2018.

Another day, another cannabis company reporting a round of job cuts. Supreme Cannabis is the latest pot company to announce layoffs, saying it would be trimming roughly 100 positions, equivalent to 15 per cent of its staff as it looks to focus on “near-term revenue growth.” Supreme also said it will stop investing in its UK and European cannabis operations, while maintaining its existing investments in Lesotho and its Truverra CBD business. Shares of Supreme have been in a downward spiral over the past year, declining by about 77 per cent.

Harvest One Cannabis said in a statement on Wednesday that its board has started a “range of strategic alternatives” aimed at refocusing its operations. A special committee of the board was formed to oversee the review while Harvest One’s largest shareholder, MMJ Group Holdings, gave the company a $2 million bridge loan last month to support the review process. Harvest One said it has no timeline associated with completing its review and noted no decisions have been met at this time.

$122,598,993
-- The amount of cannabis private retail sales in Canada in January, a slight one per cent increase from the prior month, according to Cova Software, which provides point-of-sale services for cannabis retailers. The company projects sales from 616 private stores open across Canada, an increase from 595 stores that operated in December. 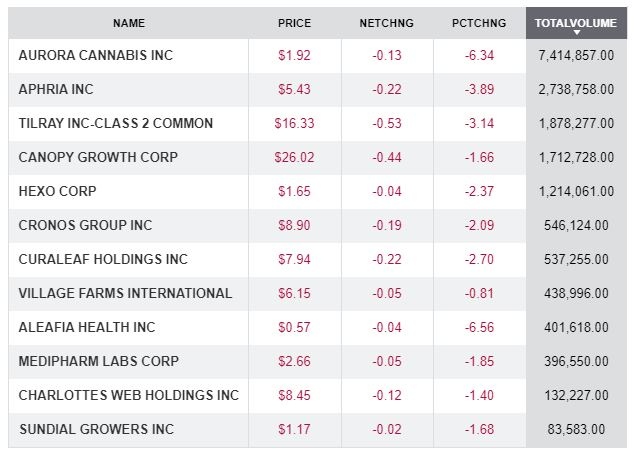