Cannabis companies spent millions of dollars trying to get their new brands out in a freshly legalized market. But one survey from Brightfield Group suggests that may have been a waste of money, BNN Bloomberg reports. The survey polled 3,000 Canadians in the first quarter of the year. Roughly two out of every five respondents said they were aware of Canopy Growth Corp.'s Tweed brand, while 17 different brands had less than 20 per cent name awareness. It's a scenario where consumers are often left to decide their purchases by price and not by brand name, packaging, or a review from a friend, Brightfield's survey found. Now, some major companies are revisiting their marketing plans..

Vancouver-based cannabis producer 1933 Industries reported its third-quarter results late Monday, posting a 17 per cent quarterly decline in revenue to $2.6 million. The company also booked a $4.7-million net loss and an adjusted EBITDA loss of $3 million. 1933 attributed the sales decline to the COVID-19 pandemic and the lower demand for the company's cannabis and CBD products. 1933 also said its outlook for the next quarter is for "limited revenue growth" as the company adapts to the uncertainty from COVID-19.

A small majority of New Zealanders support legalizing cannabis for personal use, a new poll shows. The survey of about 1,600 people in New Zealand found that 56 per cent of respondents will vote in favour of legalizing cannabis during a referendum on the matter scheduled for Sept. 19. A previous version of the poll back in February found 54 per cent of people surveyed supported legalization.

The forecasted value of retail sales of medical and recreational cannabis in the United States by 2023, according to MJBizDaily. 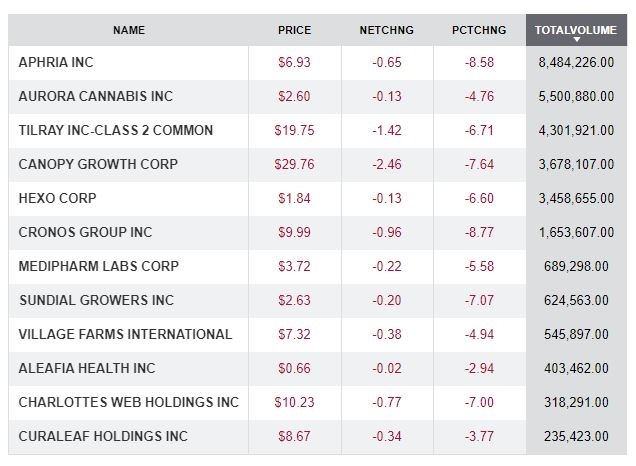 Cannabis Canada will be on hiatus until July 6.