Aurora Cannabis' Terry Booth to retire from board

Terry Booth, Aurora's co-founder and former CEO, to retire from pot giant's board
Another cannabis cowboy is hanging their hat after Aurora Cannabis announced Monday that Terry Booth is retiring from the company's board. Booth, who co-founded Aurora in 2014, steered the company from a lowly medical cannabis producer to a global pot giant which at one point was worth north of $12 billion. Booth departed as Aurora's CEO in February and since then, the company has announced more than $1 billion in write-downs, about 1,200 staff layoffs and the closure of several of its facilities. Booth will not ride into the sunset just yet. He was appointed to the board of a psychadelic company, and has started a new venture suppling PPE gear for front-line medical workers.

Distressed assets, lower valuations may mark perfect time for private equity cannabis investors to strike
There may be no better time to pick and choose some distressed cannabis companies than now, Bloomberg News reports. The newswire service said Monday that private companies’ access to capital has almost completely dried up due to COVID-19, which is likely to cause a domino effect with assets being revalued and more flexible deals. Big institutional investors remain cautious of the sector, with U.S. legalization needed to catalyze further interest in the industry, one investor said.

Auxly to halt cultivation in N.S. outdoor grow, Uruguay to help cut costs
Auxly Cannabis is pressing pause on some of the company's operations to focus its efforts on its "Cannabis 2.0" lineup and limiting expenses, the company said Monday. The company said it is delaying the planting of its Nova Scotia outdoor grow operation due to "operational challenges posed by COVID-19" and suspending the growing season of its Uruguay hemp business. Auxly will also stop cultivation at its Kolab facility in Carleton Place, Ont. The company's greenhouse production facility based in Leamington, Ont. will continue, as will its small-batch Robinsons facility.

Pot-infused drink players frustrated by regulations limiting beverage purchases
Government restrictions on legal cannabis possession limits are creating a headache for producers of infused beverages, Yahoo Finance reports. Current regulations apparently favour higher-potency drinks while restricting sales of mellower products, the website reports. With "Cannabis 2.0" products sold with dried flower equivalents, Canadians may find they're often limited to how much of these drinks they can purchase at one time. Companies such as Canopy Growth and Hexo are lobbying Ottawa to change regulations, but it might be a few years until that takes place. 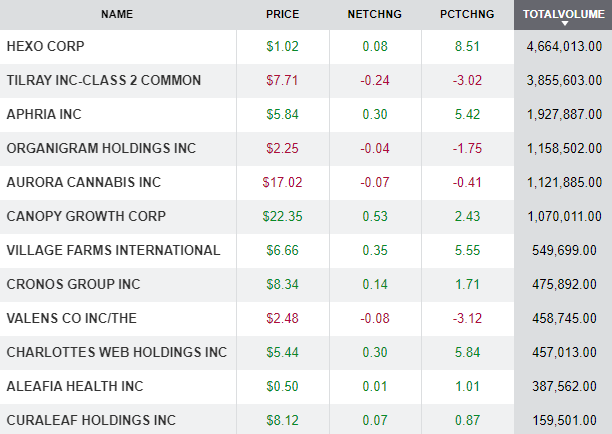