Tilray is making a cannabis retail power grab. The Nanaimo, B.C.-based company announced it is buying Alberta cannabis retailer Four20 for $110 million in an all-stock deal, subject to hitting certain performance milestones. Four20 currently operates six licensed retail locations and has 16 additional Alberta locations secured, including stores in Canmore, Calgary and Edmonton. Tilray already has minority stakes in other Canadian pot retailers such as Inner Spirit and Westleaf, but is opting to bolster its retail presence nationwide with the Four20 acquisition. Tilray’s move comes amid a pot shop expansion in Ontario where 75 stores are expected to be open by the end of the year, with more stores expected in 2020.

Fitch Ratings has a message for the Canadian financial sector: Steer clear of the cannabis industry – for now. The ratings agency stated that several concerns persist in the space, notably compliance considerations and cross-border money laundering, which would outweigh any opportunities for banks to take part in the sector. Canadian banks have shown reluctance to provide traditional services to licensed cannabis firms, instead focusing on providing investment banking services such as advisory and capital raising, Fitch said. “With cannabis still prohibited on a federal level as a Schedule 1 drug under the U.S. Controlled Substance Act, Canadian firms open themselves to liability under U.S. money laundering statutes unless they place stringent controls on cannabis activities that may have a U.S. nexus,” Fitch said.

U.S. multi-state operator Green Thumb Industries reported its financial results for the second quarter ended June 30 with revenue tripling to US$44.7 million from last year while posting a sizable net loss. GTI, which operates 13 manufacturing facilities, which possesses licences for 95 retail locations in 12 U.S. states, said its net loss was US$22.2 million, but reported positive adjusted EBITDA of US$5 million in the quarter. The company said it is on track to open approximately 15 to 20 new stores this year and should end the year with as many as 40 stores across the U.S. It expects to see additional revenue in New York and New Jersey when its stores in those states open over the next six months.

Toronto-based WeedMD said its second-quarter revenue came in at $8 million, while its cash flow improved from a year earlier. WeedMD said its adjusted EBITDA came in at a loss of about $662,000 in the quarter, better than the $3 million loss it reported a year ago. Meanwhile, gross margins improved substantially to 46 per cent from the 15 per cent last year, the company said. That margin improvement came as WeedMD improved its cultivation cost per gram by 30 per cent to $0.96 per gram. Eight Capital analyst Graeme Kreindler said the company’s margins will continue to improve as its semi-automated packaging and labelling line improvements at its Aylmer, Ont. facility are expected to come online next quarter. Its large-scale fully automated packaging lines will be operational next year.

US$50
-- The fine in New York for possessing less than one ounce of pot, after the state officially decriminalized marijuana on Thursday. 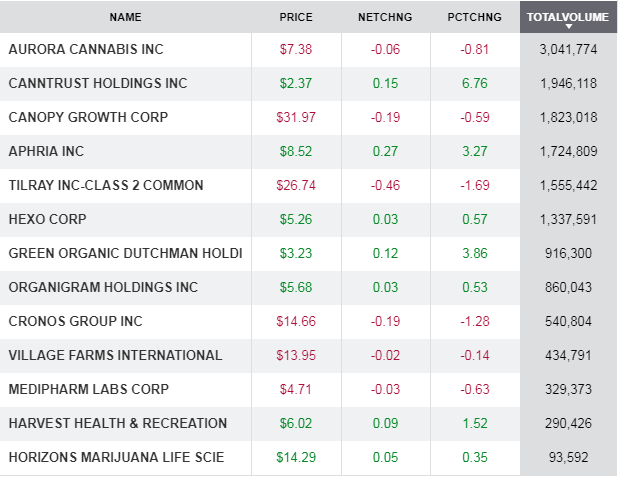