U.S. lawmakers quizzed a Justice Department (DOJ) attorney on Wednesday after receiving a whistleblower complaint that Attorney General William Barr ordered unneeded probes into the cannabis industry because of his personal opposition to the drug. Reuters reports that the testimony from John Elias stated that the Barr Justice Department investigated 10 mergers in the cannabis industry, even though the industry didn't qualify for an antitrust investigation. Democrat and Republican lawmakers took turns commenting on the allegations, mostly split down party lines. The DOJ wasn't immediately available for comment on the allegations against Barr.

Shares of Vivo Cannabis were up about four per cent on Wednesday after the company announced it has struck a supply deal with Shoppers Drug Mart. Vivo will provide Shoppers, the largest pharmacy chain in Canada, with medical cannabis including vapes and chocolates as well as clinic services. Vivo's subsidiary, Harvest Medicine, will provide cannabis education services to Shoppers patients, the company said. Shoppers has more than 20 supply agreements with licensed brands in Canada.

U.S. cannabis service provider Tilt Holdings reported late Tuesday that its first-quarter revenue was US$42.4 million, posting US$1.7 million in positive adjusted EBITDA. Tilt, which owns a vape hardware company and software application for cannabis distributors, said its revenue rose 27 per cent from the prior quarter. The company also named Mark Scatterday as its permanent CEO. Tilt said its vape hardware business recorded US$32.3 million in revenue in the quarter due to an increase in seasonal demand. Canaccord Genuity analyst Bobby Burleson said the company will likely continue to be cash-flow-positive despite various industry headwinds. 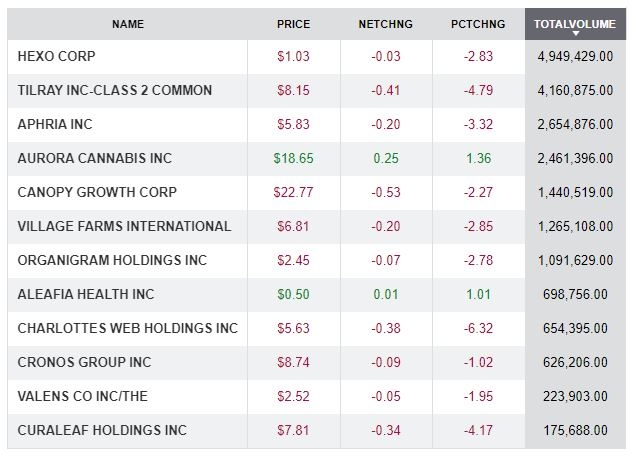