Cannabis vape sales in five U.S. states declined substantially over two months following a health crisis which has afflicted thousands and is believed to be the primary cause of dozens of deaths. New figures from BDS Analytics and Arcview Market Research show that vape sales fell 26 per cent to US$119 million between August to October in the states of California, Colorado, Oregon, Nevada and Arizona. Cannabis vapes accounted for approximately 25 per cent of total sales in the first three quarters of 2019, Bloomberg News reported. However, outside of vapes, the health crisis didn’t appear to impact cannabis sales. September sales of all non-vape products fell 4.6 per cent, only slightly more than the 4.1 per cent decline in the prior September, the figures show.

The Green Organic Dutchman is letting two top executives depart the company in a move aimed at reducing costs and improving cash flow. TGOD said in a statement on Thursday that Csaba Reider, the company’s president, and Mike Gibbons, vice president of sales, will be leaving the organization. TGOD CEO Brian Athaide will assume the responsibilities from Reider’s departure, the company said. Athaide was quoted in the statement saying that the moves will result in “significant G&A savings and a leaner more efficient organization.”  Robert Gora, TGOD’s vice president of medical commercialization, will take on a new role as VP of national sales, where he will now lead the company’s sales across both its medical and recreational businesses.

Las Vegas-based Planet 13 Holdings said preliminary 2019 revenue is expected to be about US$63 million while the company’s sole dispensary served about 695,000 customers. Planet 13, which operates the world's largest cannabis dispensary, said customers spent an average of US$90 per visit last year, although that average rose slightly to US$100 per transaction in December. The company plans to increase its market share in the Nevada market by entering the wholesale market while opening a new massive cannabis retail store outside of the state.

“It’s small-cap stuff. It does come with noise.”
-- Blake Hutcheson , incoming CEO of Ontario Municipal Employees Retirement System, on whether the pension fund has any plans to invest in the cannabis sector. 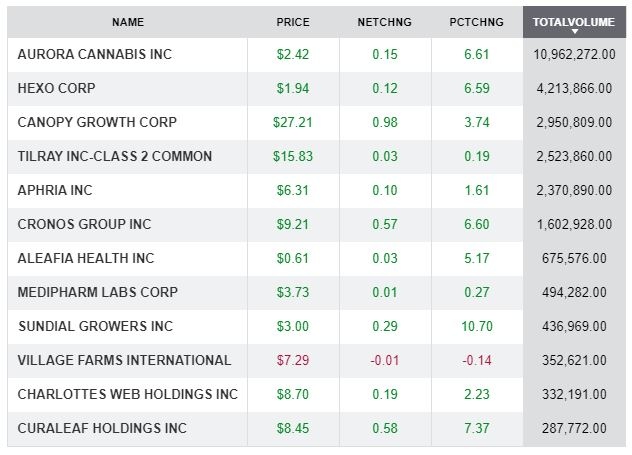