There's a billion grams of cannabis stuck in vaults across Canada. The billion dollar question now is: What do you do with all that legal pot?

Health Canada released industry-wide cannabis data for October earlier this week showing that about 1.1 million kilograms of cannabis are being stockpiled by producers nationwide.

That's an all-time high for the sector, following the second legal harvest of outdoor cannabis in Canada. That harvest pumped an additional 220,461 kilograms of legal pot into the market, up 67 per cent from the previous month.

It's a glut that continues to weigh heavily on the industry, possibly spelling further writedowns and facility closures in the months to come, analysts say.

Het Shah, managing director of Cannabis Benchmarks, said that Canada's monthly consumption rate comes to about 30,000 kilograms which means that three years worth of supply is currently idle.

"It's quite a substantial number," he said in an interview. "Some of these licensed producers might be thinking they can write it off and buy it from a smaller producer, which might wind up being a higher grade product."

This week The Valens Co. announced it would liquidate its cannabis oil products at market-clearing rates, which could prove to be another canary in the coal mine suggesting more losses are coming. Tyler Robson, Valens chief executive officer, said in an interview that the company was looking to scrap its "inferior grade" product now that it has better options for higher-quality material.

"Commoditization is happening quicker than people expected," he said. "I think this is at the inflection point of this space. And we wanted to get in front of it, prior to everybody else."

The oversupply situation is making it easier for companies that opt to buy smaller batches from producers to re-package it for the recreational market, a practice widely known as "white-labelling."

"A year ago, maybe a little more, we were buying mediocre cannabis with mid-range THC levels for $4 to $5 a gram," said Peter Machalek, vice-president of sales and partnerships at TREC Brands, parent of both Thumbs Up and Wink.

"You can't give away mid-range THC product for a buck now. The market has become much more sophisticated, following what the consumers are demanding."

"A lot of them don't want to publicly show their warts, right?" he said. "Everyone's fighting for the best margin, best cost position, best market share. So, writing down stuff is admitting defeat, as far as I'm concerned."

He added that there is still one potential wild card that could give some companies - including his - a bit more breathing room: Health Canada's upcoming ruling on whether to allow CBD - the non-impairing chemical compound found in cannabis - to be an ingredient used for over-the-counter health and wellness products. A formal decision is expected to happen later this year.

"No one knows how much of that billion grams is in CBD," Benic noted. "If it's CBD, we'll find it out. That's an easy one. But if it's THC, there'll be a lot of guys probably going out of business."

Beleaguered cannabis producer CannTrust Holdings said it has entered an agreement with plaintiffs behind a class action lawsuit filed against the company. The agreement seeks to settle litigation that was commenced shortly after it received a non-compliance order from Health Canada stemming from a production scandal that led federal regulators to suspend its ability to grow and produce legal pot. The company said that the "restructuring support agreement" it entered into with plaintiffs still needs to be negotiated to finalize "in good faith." A trust with $50 million was established that will be earmarked for investors who settle with the company.

Recreational cannabis sales began in Arizona on Friday, but they need to be kept separate from any medical sales. Arizona passed a ballot measure in November making it legal for adults to possess cannabis, while also allowing the state's 123 existing medical dispensaries to apply for a licence to sell recreational marijuana. Roughly 70 of the dispensaries that have filed an application are allowed to sell to the adult-use market. It costs dispensaries $25,000 to apply to move into recreational sales.

Canada sold $261.4 million worth of cannabis in November, according to data released by Statistics Canada on Friday. That's down by 3.2 per cent from the prior month, the first such decline since April, according to StatsCan. Every province except Saskatchewan reported a monthly sales decline in November. Taken on a per-day basis, cannabis sales were flat between October to November. Canada's cannabis industry is now operating at an annual run rate of about $3.13 billion. Ontario continued to lead the country with the $82.9 million in sales, down about 1.2 per cent from October.

Alberta-based Alcanna said Monday it is spinning off its cannabis retail division and merging it with YSS Corp. in an all-stock deal that would value the combined company at about $130 million. The deal will see the creation of a new "Nova Cannabis" corporate entity that will operate 53 stores in Alberta, Saskatchewan, and Ontario, with another nine locations under construction. The new company will look to uplist to the Toronto Stock Exchange once the deal closes, the companies said. Canada's cannabis retail market has experienced a wave of consolidation in recent months with High Tide acquiring Meta Growth, while Fire & Flower picked up Friendly Stranger back in November.

Shares of Aurora Cannabis fell about 3.6 per cent on Friday after the company disclosed a day earlier that it has entered into a bought deal valued at US$125 million. Aurora said it intends to use the proceeds from the deal for "general corporate purposes, which may include opportunistically reducing debt." RBC Capital Markets analyst Douglas Miehm said in a report that the financing should give Aurora additional financial flexibility, although it will dilute its outstanding share base by around 12 million. Miehm has a "speculative risk" rating on Aurora, with a $14-per-share 12-month price target.

CANNABIS SPOT PRICE: $5.95 per gram -- This week's price is up 1.5 per cent from the prior week, according to the Cannabis Benchmark’s Canada Cannabis Spot Index. This equates to US$2,128 per pound at current exchange rates.

Weekly Buzz: “We were the ones most negatively affected by the war on drugs, and America has turned around and created a business from it that’s worth billions.” Rapper and entrepreneur Jay-Z on why he's launching a US$10 million fund to invest in minority-owned cannabis startups in an interview with The Wall Street Journal. 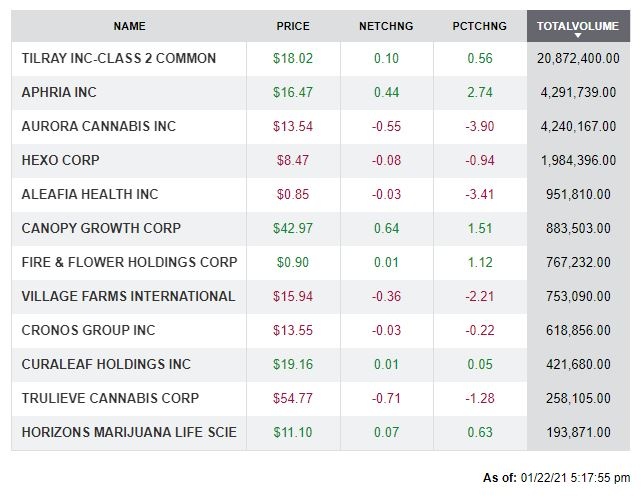