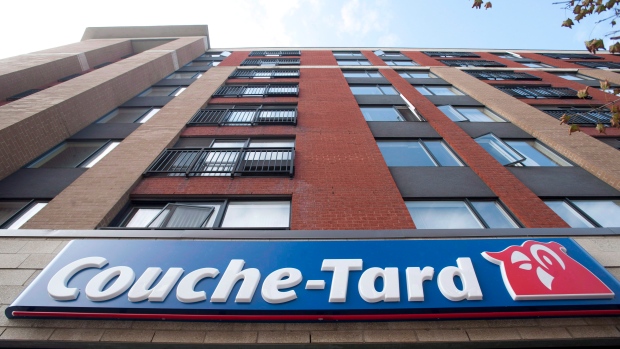 Couche-Tard could be one of the U.S. biggest pot retailers: Analyst

One Bay Street analyst thinks one of Canada's biggest companies is primed to find itself as one of the biggest cannabis retailers in the U.S. - once the world's biggest consumer market legalizes the drug.

Alimentation Couche-Tard Inc. may find selling cannabis in its 7,100-plus U.S. convenience store network to be a key part of its plan to double its business over the next several years, according to Eight Capital Analyst Graeme Kreindler.

In a report to clients this week, Kreindler said once the U.S. legalizes cannabis - something that could happen within the next few years - Couche-Tard could generate as much as $4.5 billion in sales if it carves out some space in its Circle-K stores for legal cannabis products. Convenience stores already account for 85 per cent of tobacco sales and half of all alcohol sales in the U.S., making cannabis a logical addition to that particular retail model.

"Cannabis, ultimately, will one day resemble a lots of other mature industries," Kreindler said in an interview. "[Couche-Tard] has all the makings of being the sort of retailer that has a natural plug-and-play for cannabis across its core competencies."

While the report casts a long-term view that speculates how Couche-Tard could benefit from the legal U.S. marijuana market over the next 10 years, the convenience store giant already plays in the cannabis space. It has a sizable minority stake in leading Canadian cannabis retailer Fire and Flower Holdings Inc., which has already licensed its brand for one California dispensary and could take a majority stake in the retailer if it exercises outstanding warrants to do so.

Eight Capital expects that Couche-Tard could see its earnings-per-share improve by about 24 per cent once the U.S. cannabis market reaches maturity, which the firm expects to occur by 2030 and reach about US$92 billion. Cannabis retail represents an EBITDA opportunity that is expected to be between two times to eight times greater than management's previously identified growth plans.

"What we've done in this note is basically trying not acknowledge that this is a good growth opportunity, but what that actually could look like, not only across their supply chain but also to the bottom line," Kreindler said.

The company already sells alcohol and tobacco products, so it already has experience operating in regulated industries, said Kreindler. It may see some sales erosion from those products if cannabis is legalized, with a recent publication in the National Tax Journal predicting a 15 per cent drop in alcohol demand and a 5 per cent decline in cigarette sales if the drug is federally descheduled. But cannabis could help make up for that lost ground as the drug generates sales per store that are 2.5 times and seven times greater than tobacco and alcohol, respectively, Kreindler notes.

"Couche-Tard has definitely a lot of experience operating in regulated industries. They have $6 billion of available capital on their balance sheet right now and lots of incremental capacity to add to that. They certainly would have potentially capital resources to put to work when the time came to make that happen," Kreindler said.

"It's not just a key differentiator as retailers and consumer-facing companies, but it's our responsibility. You don't want somebody just coming in grabbing something. It's a learning experience, it's a discovery experience [for consumers]," Lynch said.

Canadians bought $338.9 million worth of cannabis in July, reaching a new monthly record and surpassing the $4-billion annual run rate for the first time, according to Statistics Canada. While total Canadian retail sales fell in the month due to lower grocery spending, cannabis sales bucked the trend with all provinces and cities reporting monthly gains in July. Cannabis retail sales rose 6.2 per cent in July from June, increased 45 per cent on an annual basis and was up at a 2.8 per cent pace on a per-day basis. Cannabis sales in Ontario - which was the only province to double sales over the past year - led the country with $126.7 million in pot sold in July, an increase of 5.5 per cent from June. Several analysts note that August cannabis sales are projected by Hifyre to reach nearly $350 million, which would represent roughly a 2 per cent gain.

Aurora to shut Edmonton facility, lay off 8% of staff

Aurora Cannabis said Tuesday it plans to close another one of its facilities, while laying off roughly eight per cent of the company's workforce. The company said its Aurora Polaris property in Edmonton will be shut down in a company-wide effort to become a more agile organization. Medical distribution products will be shifted over to a nearby facility, while manufacturing will move to an Ontario plant. The facility shutdown comes after a previous announcement from Aurora that showed it planned to close five of its cannabis production facilities as the company attempted to better align its operations with the Canadian supply-demand dynamic. Aurora didn't immediately diclose the specific number of staff affected by the layoffs. The company employed 2,380 employees as of Sept. 2020, the most recent staff count disclosure. Aurora recently pushed the release of its fourth-quarter earnings from Tuesday to Sept. 27.

Legislation that would allow federally regulated financial institutions to engage with U.S. cannabis companies was added to a U.S. defence spending bill, which was passed by the U.S. House of Representatives on Tuesday. The National Defense Authorization Act received an amendment that closely resembles the so-called SAFE Banking Act, which was passed by the House before with bipartisan support. The amendment's prospects to survive a revenue from the U.S. Senate remains unclear, especially since Senate Majority Leader Chuck Schumer has previously expressed a desire to consolidate the cannabis banking legislation within his own wide-ranging marijuana reform bill, which some industry observers believe could become law sometime next year. Cannabis reform was also highlighted in a policy note this week from Amazon, which expressed its support for Schumer's recently introduced Cannabis Administration and Opportunity Act.

A lawsuit alleges that "millions of pounds" of cannabis are being diverted to the illicit market from California producers, MJBizDaily reports. The trade industry website said that Catalyst Cannabis Co., a Southern California retail chain, filed a lawsuit against the state’s top marijuana regulator that alleges that some unnamed "criminals" are obtaining distribution licences in order to buy legally grown marijuana at wholesale prices for sale either within California or outside of the state through the illicit market. In effect, the plaintiffs allege that this creates a regime where the legal cannabis market appears to support illicit operators rather than replace them. The suit also alleges that state authorities are aware of what is taking place but are doing little to stop it. California's Department of Cannabis Control declined to comment on pending litigation, according to MJBizDaily.

Referendum to legalize cannabis schedule for vote in Italy

Italians will soon head to the polls to vote on a referendum that could legalize the sale of recreational cannabis next year in the European nation, Reuters reports. Backers of the referendum have already obtained more than 500,000 signatures, ensuring the vote that could pave the way for a decriminalisation vote. One pollster said that 57 per cent of Italians would support such a move, which would create one of the most liberal European countries on cannabis policy, Reuters reports. Taxing legal cannabis would add as much as six billion euros to Italy's treasury annually and add 35,000 new jobs, according to one researcher.

CIBC Analyst John Zamparo reduced 12-month price targets on seven Canadian-based cannabis companies in a note to clients on Thursday, noting that profitability remains elusive for that group. As well, CIBC also reduced its fiscal 2022 sales forecasts for Canopy Growth and Tilray. Zamparo highlights how several cannabis ETFs have seen a 25 per cent decline since reaching yearly highs in February as investors migrate out of the sector amid negative sentiment brought on by "ongoing lack of profitability from most Canadian producers, the continued dearth of institutional investors, and the realization that U.S. legalization appears unlikely until at least next year." CIBC's target price charges with their analyst recommendation are as follows:

CANNABIS SPOT PRICE: $5.12 per gram -- This week's price is up 0.4 per cent from the prior week, according to the Cannabis Benchmark’s Canada Cannabis Spot Index. This equates to US$1,823 per pound at current exchange rates.

WEEKLY BUZZ: $4.066 billion - The annual run rate of cannabis sales in Canada as of July, according to Statistics Canada. This is the first time the run rate has surpassed the $4-billion mark.