Aurora generated just $55.1 million in revenue – its lowest amount in six quarters – and short of the $68 million analyst expectation. It also posted an adjusted EBITDA loss of $24 million, wider than the expected $10 million loss.

MKM Partners Executive Director Bill Kirk – who maintains a "sell" rating and $6 price target on Aurora – said the company now is a "shell of what it was supposed to become."

"More inventory will be written down, more goodwill will be impaired, more assets will be sold for less than book value, and shareholders will continue to get diluted," Kirk said in a report to clients Friday.

He added Aurora will have a hard time differentiating itself in the Canadian cannabis market with its recent management decision to outsource sales functions, a move that could also see it further commoditize its flower offerings. Kirk reduced his full-year revenue expectation for 2022 to $269.5 million from $353 million.

"With limited success in Canada, Aurora has no right to win outside its home market," Kirk said. 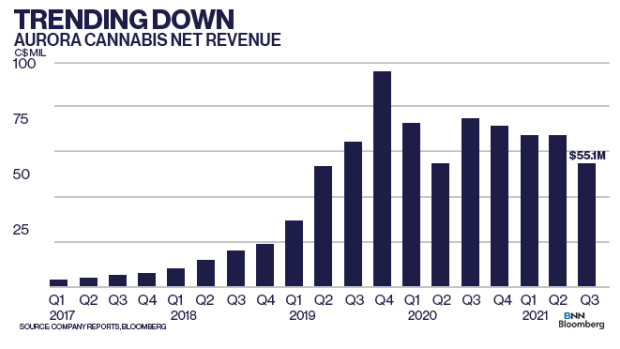 Other analysts were similarly bearish on Aurora following the company's results. Desjardins Securities Analyst John Chu said the company's 37 per cent drop in Canadian recreational sales is "becoming a big concern" that signals another substantial loss in market share.

Chu, which reduced his price target on Aurora to $8 from $11 while maintaining a "sell" rating, said the industry is experiencing broad sales declines due to COVID-19 and wholesaler restocking. But the company's decline is "substantially higher than its peers", Chu notes.

However, Aurora still commands a sizable advantage in the medical cannabis space, both in Canada and internationally, with adjusted gross margins of 59 per cent. That could give the company an edge over its peers and could see it become a potential acquisition targer, said Miguel Martin, chief executive officer at Aurora, in a broadcast interview with BNN Bloomberg.

That could provide the company with a strong platform for growth as more countries open up their markets to medical pot sales, Cowen & Co.'s Vivien Azer said. Cantor Fitzgerald Analyst Pablo Zuanic also noted Aurora deserves some credit for keeping its lead in the domestic medical market, but in a note to clients openly asked if the company should get out of the recreational market entirely.

"While probably a contrarian argument – given the company’s poor track record in recreational sales in recent quarters – we could become more constructive on evidence of a growing medical market and of Aurora maintaining is medical leadership," Zuanic said.

It was a pretty good week for Trulieve. The Florida-based cannabis company announced a big US$2.1 billion agreement to acquire west coast pot player Harvest Health and Recreation in an all-stock deal. The acquisition will give Trulieve a strong foothold in the Arizona and Pennsylvania cannabis markets, as well as supplanting rival Curaleaf Holdings as the U.S.'s biggest cannabis company by profit. In an interview with BNN Bloomberg, Trulieve CEO Kim Rivers said she expects more M&A deals to be announced in the sector amid growing signs the U.S. will soon legalize cannabis. "It's really happening all around us and that level of activity will certainly spawn additional consolidation in the industry," Rivers said. As well, Trulieve reported first-quarter results, with revenue up 102 per cent to US$198 million and a 27 per cent jump in profit to US$30.1 million.

Republican congressmen co-introduce new bill to legalize cannabis
While cannabis industry observers eagerly await Senate Majority Leader Chuck Schumer's upcoming cannabis reform bill, a pair of Republican congressmen introduced a bill that would legalize marijuana in a manner similar to alcohol. The bill – titled  “Common Sense Cannabis Reform for Veterans, Small Businesses, and Medical Professionals Act" – would deschedule cannabis as a controlled substance, provide banking measures for the industry, expand marijuana research efforts and provide increased access for veterans who require medical marijuana prescriptions. BMO Capital Markets anticipates Schumer's bill will be released sometime by the end of the month, and that this Republican-led legislation is meant to serve as a "conversation starter".

Fire & Flower sued for $3M over unused pot shop on Toronto's Mink Mile
Canadian cannabis retailer Fire & Flower is being sued by a former landlord over missed payments related to an unopened Toronto location, according to Yahoo! Finance Canada. Court filings obtained by Yahoo! found Fire & Flower is being sued for $3 million in damages for breaching its lease contract after it didn't get a licence to open a legal pot shop at a location on Toronto's tony Bloor St. In its defense, Fire & Flower claims it should be excused from the contract, and filed a separate claim against its realtor as it missed how the location is within 150 metres of a private children's school.

Nasdaq to add a couple more cannabis names with High Tide, Aurora
The Nasdaq is adding some more cannabis names to its platform with Aurora Cannabis and High Tide announcing plans to list on the U.S. exchange. Aurora disclosed its plans to move to the Nasdaq from the New York Stock Exchange in a quarterly release Thursday, a move that should help the pot producer save on capital market costs. High Tide plans to move to the Nasdaq this month following a prior decision made earlier to consolidate its outstanding and issued share base by a ratio of 15 to 1.

Analyst Call of the Week - Cowen on Sundial

Sundial Growers reported its first-quarter results on Tuesday, eking out a small $3.3 million gain in adjusted EBITDA despite a 29 per cent drop in revenue to $9.8 million. The company stated during an analyst call it expects to see further price compression in the Canadian cannabis market for at least another quarter, a move that will see the Calgary-based company shift some of its resources to selling more premium products. However, the company's recent wave of investments – Indiva, Inner Spirit, Valens – helps to offset any challenges its operations face, according to Cowen & Co.'s Vivien Azer. Azer, which gives Sundial a "market perform" and US$0.75 12-month price target, sees the company's strategy of deploying capital "to take advantage of opportunities it sees in the Canadian market." She also expects Sundial to generate about $15 million of investment income in the next quarter.

CANNABIS SPOT PRICE: $5.63 per gram -- This week's price is down 1.7 per cent from the prior week, according to the Cannabis Benchmark’s Canada Cannabis Spot Index. This equates to US$2,103 per pound at current exchange rates.

“I knew there was trouble in the cannabis industry but I didn’t think it would hit home like that.”

Enniskillen, Ont. Mayor Kevin Marriott on Tilray's decision to close a cannabis greenhouse near Petrolia, Ont., a move that will reduce the company's workforce by 225 people.