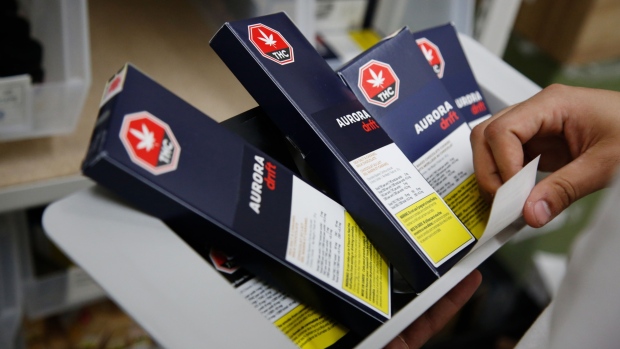 The time was right for Aurora Cannabis Inc. to strike with yet another bought deal last week. The cannabis company looked to take advantage of a recent run in its stock amid a broad investor move into cannabis at the beginning of the year.

The net result is an additional US$137 million in proceeds to Aurora's balance sheet, albeit with some additional dilution to the company's stock. While some shareholders may be growing tired of Aurora's equity moves, the additional capital will give the company some more flexibility when looking south of the border for additional deals, its chief executive officer told BNN Bloomberg. One analyst estimated the move now gives Aurora roughly $700 million in capital to use for further investment.

"The reality is, right now is our current syndicate of financing has a risk tolerance as it pertains to us, that is probably a lot more conservative than maybe ours would be," said Miguel Martin in a recent interview.

"We needed to put ourselves in a position where if something were to happen, particularly in the U.S., we could take them out and have maximum flexibility."

What Aurora's role in the U.S. cannabis market will be remains to be seen. The company does have some operations there through its acquisition of CBD retailer Reliva LLC, but Martin sees the company's expertise in plant genetics and cultivation as a potential asset to deploy once it can operate in the U.S.

Martin points to Canopy Growth Corp.'s recent lawsuit against GW Pharmaceuticals PLC in the U.S. over CBD extraction methods as a pivotal moment that could help determine the value of what some cannabis genetics and intellectual property is worth.

But Martin adds that he thinks once the U.S. does legalize cannabis federally - something that might take longer than what some people have eagerly forecast - it'll look a lot more regulated with the U.S. Food and Drug Administration borrowing the same playbook employed by Health Canada.

"I just think that people are a little bit naive if they don't think it's going to look a lot like Canada and a lot less like the Wild West when it comes to federal regulation of cannabis," Martin said.

Cronos on pace to launch lab-grown cannabis products this year

Would you consume cannabis that was lab-grown? Cronos Group is betting that you will, as it plans to release its first lab-grown products that contain cannabinoids created using biosynthesis, an engineering process similar to brewing beer. That process could see Cronos make cannabis containing THC and CBD for pennies on the dollar. "We're waiting on licensing, but one of our biggest initiatives for this year is making sure we can actually bring something to the market," Cronos Executive Chairman Mike Gorenstein told BNN Bloomberg.

Horizons launched the world’s first exchange-traded fund for psychedelic-drug companies earlier this week. The ETF operator said its Psychedelic Stock Index ETF, listed as PSYK, began trading on the NEO Exchange on Wednesday, giving investors access to a stream of companies involved in prospective mental health treatments using the drugs. Some of the companies held in the ETF include MindMed and Peter Thiel-backed Compass Pathways. The fund will track the North American Psychedelics Index.

Canadian cannabis retailer High Tide is making a play for the U.S. market, announcing plans to buy e-commerce accessory seller Smoke Cartel on Monday. High Tide will buy Smoke Cartel for US$8 million in cash and stock. Once closed, the company will operate the world's two biggest e-commerce cannabis accessory platforms. High Tide noted in a release that the acquisition will give it access to the U.S. cannabis market once the country moves towards federal legalization. Smoke Cartel reportedly made US$7.4 million in revenue in 2020 with a 16-per-cent EBITDA margin.

The U.S. Senate is in the midst of crafting new cannabis legislation that will merge a number of existing related bills in an effort to consolidate reform during the current Congressional session, according to Marijuana Moment. Senate Majority Leader Chuck Schumer spoke to former NBA player Al Harrington - who owns the Viola Brands cannabis company - and outlined the U.S. Senate's plans to potentially legalizae cannabis. While it's not clear which other bills are being merged, it would likely address federally descheduling marijuana and funding efforts to expunge prior cannabis records.

Arizona adult-use market off to a strong start

Arizona's recreational cannabis market is off to a roaring start, three months after voters gave the green light for adult-use sales to begin, MJBizDaily reports. The industry trade site said initial adult-use sales in Arizona were two-to-three times the value of their usual medical cannabis sales with flower products said to be in high demand. MJBizDaily noted that demand is so strong, product shortages could occur. Just under 100 dispensaries in the state are licensed for recreational sales, but Arizona is due to issue 26 more licenses under a social equity program.