Canadians bought more than $2 billion of dried flower cannabis products last year, while sales of edible products remained muted, according to Statistics Canada.    StatsCan's quarterly retail commodity survey showed dried flower continued to dominate the legal Canadian recreational market, accounting for more than three-quarters of all sales. Roughly $2.01 billion of dried flower, which also includes pre-rolls, were sold in 2020, with the fourth-quarter seeing nearly double the amount sold from the prior year with $614.4 million, according to StatsCan.    Interestingly, the next leading category was extracts and concentrates, which came in at $323.9 million sold last year, or 12.3 per cent of all sales. The category, which was only made available for legal sale in Oct. 2019, surged in retail activity with quarterly sales tripling by the fourth-quarter of the year to $123.7 million. Extract sales also includes vape products, but StatsCan doesn't further break down sales within the category. 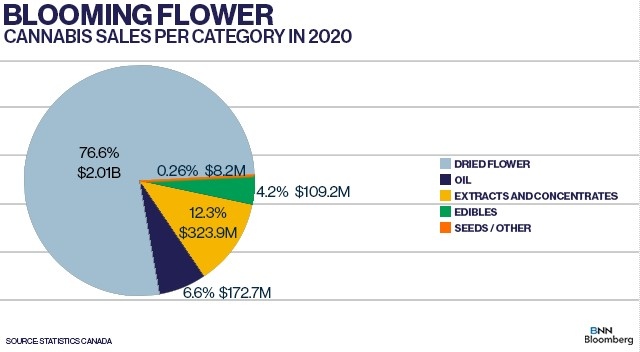 Meanwhile, infused edible products - which were hit the market at the same time as extracts - represented just over four per cent of the market with just $42 million in sales last year, according to StatsCan. The category includes food products, like soft chews and drinks, and its lower-than-anticipated sales may indicate customer pick-up may not be as fervent as first expected.    Oil products beat out edibles with a 6.6 per cent of the market and $172.7 million in sales. Roughly $1.5 million of cannabis seeds and vegetative plants were sold last year - an early sign of a burgeoning homegrow market - while the grab-all "Other" category came in at $6.7 million in sales.    Interestingly, the numbers vary slightly from the market share figures provided by the cannabis wholesaler in Ontario, Canada's largest consumer market. The Ontario Cannabis Store said about 77 per cent of all sales came from dried flower and pre-rolls, while oil was just 3.7 per cent of the market. Extracts, which includes vapes and concentrates, total about 18 per cent of Ontario's market, much more than the national statistics show.
THIS WEEK'S TOP STORIES
Flowr hires new CEO, appoints ex-Ashley Madison CEO to board amid major restructuring
Toronto-based cannabis producer Flowr Corp. announced several major initiatives this week following the company's strategic review process aimed at refocusing its operations to better serve the Canadian and European markets. The company appointed former winery head Darryl Brooker as its new CEO while interim CEO Lance Emanuel will tender his resignation in early May to pursue an opportunity in the U.S. Flowr also appointed Noel Biderman, the former CEO of adultery website Ashley Madison, who stepped down from the role after hackers released users' personal information, to its board. The company said it will reduce some of its staff, while relocating its management to its production facility in B.C. Flowr will also close its Toronto office, sublease its Kelowna office and sell some of the land it owns there, divest its investments in Australia, Uruguay and Spain, and allow its employees to get some of their salary paid in restricted share units. Flowr's stock is down roughly 46 per cent over the past year.

The deal to close the blockbuster merger between Aphria and Tilray will take a couple weeks more to finalize. While Aphria said its shareholders overwhlemingly approved the transaction with 99.38 per cent support, Tilray said Thursday it will extend its voting deadline to April 30​ to allow its shareholders more time to vote on the deal. Tilray, which has one of the largest retail investor bases in the cannabis sector, also announced Friday that it would amend its bylaws to allow a lower number of voters to meet quorum, moving its requirement down to one-third of all outstanding shares rather than a majority of shareholders. Cantor Fitzgerald Analyst Pablo Zuanic said in a report on Friday that he has "good conviction this deal will happen" while noting the "market seems to be saying the deal will indeed happen."

Analyst Call of the Week - Trulieve

Several analysts raised their 12-month price targets on U.S. multistate operator Trulieve this week after the company closed a US$228 million equity raise. The raise now gives Trulieve about US$385 million in cash on hand, among the largest war chests in the U.S. cannabis sector, which Echelon Capital Markets Analyst Andrew Semple expects to be earmarked for M&A opportunities. Semple, who raised his target price to $71 a share from $67 in a report this week, sees Trulieve poised to use the funds to acquire cannabis businesses in limited license markets. Eight Capital's Graeme Kreindler upped his target price on Trulieve to a flat $100 a share from $95.5, taking account of the company's leadership position in the Florida medical cannabis market. Trulieve has 79 dispensaries in Florida, double the amount of its next competitor, and has a roughly 50 per cent share of the state's medical dried flower sales in the first quarter of the year.

CANNABIS SPOT PRICE: $5.81 per gram -- This week's price is up 1.4 per cent from the prior week, according to the Cannabis Benchmark’s Canada Cannabis Spot Index. This equates to US$2,101 per pound at current exchange rates.