As cannabis producers raced to the bottom to help move unsellable pot, the other end of the market remains in high demand.
Canopy Growth Corp.'s acquisition of Supreme Cannabis Co. for $435 million on Thursday highlighted how valuable premium cannabis can still be in the Canadian recreational space. Sales in the segment are now booming following a rough-and-tumble period that saw more producers flock to the low-end of the market.
"Most [consumer-packaged-goods] companies don't just rely on one brand, we wanted to make sure that we have appropriate scale in each in each price category," said Canopy's Chief Executive Officer David Klein in a phone interview.
"Value brands" - another name for cannabis with a price point below roughly $6 a gram - have become a significant part of the market over the past year, a key reason why many consumers have transitioned away from the illicit market and bought legally. Meanwhile, charging a premium for a cannabis product is an attractive proposition for licensed producers as they command higher margins, help retain customer loyalty, and can better compete with the illicit market.
John Fowler, who co-founded Supreme Cannabis and now is president of Muskoka Grown, a premium producer based in Bracebridge, Ont., told BNN Bloomberg the company looked to mimic how wine was sold under a "prestige" label, or in other words, "it feels premium but it feels attainable."
"It's all about fit," he said in a phone interview. "In Canada, there is a very traditional downward sloping demand curve that shows the customer is price sensitive on volume. And when you're talking about that sliding scale of premium, when you get up to super-high priced products, consumers are going to demand their cannabis will be nearly perfect."
Pricier premium offerings have commanded the lion's share of the Canadian cannabis market, according to a recent report from ATB Capital Markets.
Premium cannabis, described by ATB Capital Markets as dried flower with a THC content equal to or greater than 20 per cent, saw sales climb to $88.6 million in February, a 142 per cent jump from a year earlier. The premium category now accounts for 61 per cent of all dried flower sales, up from 40 per cent last year.
"Premium is a nice high margin segment to go after," said ATB Capital Markets Analyst David Kideckel in a phone interview. "Folks are actually looking for very specific brands, and they're willing to pay that difference in price, even if it's a another good 20 per cent to 30 per cent higher than a competing high-THC brand." 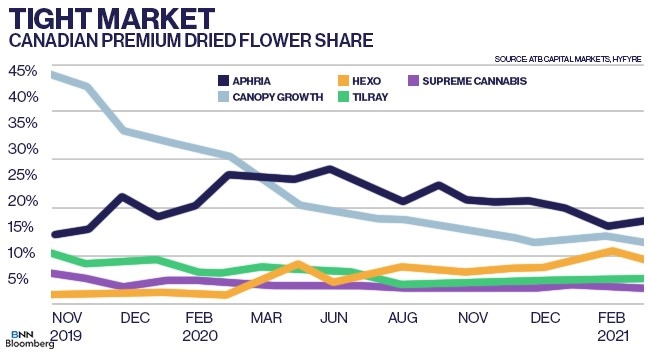 Kideckel - who doesn't cover either Canopy or Supreme in his equity research - said Canopy's bet on the premium market is validation that there remains strong demand for that category and expects more acquisitions in the space to follow.
Cantor Fitzgerald Analyst Pablo Zuanic identified 75 brands that operate in the "premium" market, or dried flower that is sold for over $9 a gram. That represents about 31 per cent of all brands, while Supreme's 7Acres brand led that segment with about 10.6 per cent of the market, Zuanic said. Other leading premium brands include Qwest, Auxly Cannabis Inc.’s Kolab Project, and Flowr Corp.
"There is not much left, other than independent brands one third or one fourth the size of 7Acres," Zuanic wrote. "Yes, perhaps some potential bidders may think they have the reach and ability to scale up those brands. But again, there is not much left."

Organigram plugs missing gap in portfolio with $22M deal for Winnipeg candy maker
Organigram Holdings filled in a missing piece of its product portfolio after announcing it acquired Edibles & Infusions Corporation (EIC), a Winnipeg-based candy manufacturer for $22 million. The deal comes with an additional $13 million in payments dependent on if certain financial milestones are hit. EIC is led by James Fletcher, also the CEO of Cavalier Candies, which has been making confectionery ​products for over 100 years. Jefferies Analyst Owen Bennett said in a note that the deal adds to its "impressive" portfolio and addresses a need to supply the 'soft chew' side of its edibles offerings, which accounts for about 75 per cent of that category's sales across the country. Organigram expects to have its first sales of EIC manufactured soft chews around its fiscal fourth quarter.

VP Harris to pause on U.S. legalization efforts, Schumer expected to unveil reform bill soon  The pathway for U.S. legalization got slightly muddier over the past week following comments made by Vice President Kamala Harris in an interview with the San Francisco Chronicle. "We haven’t yet taken that on,” because the administration has been focused on tackling the coronavirus pandemic, Harris told the newspaper. Still, Senate Majority Leader Chuck Schumer continues to push forward on his legalization bill, which he recently told Politico should come out "soon". The bill, which is being written along with fellow Senators Cory Booker and Ron Wyden, will move forward in Congress (once it's introduced) despite no assurance it will be signed into law by President Joe Biden, Schumer told Politico. Meanwhile, another federal lobbying group supporting cannabis legalization has emerged, this one with the unlikely bedfellows of Snoop Dogg and the Koch Brothers.

Califari, Merida Capital to develop digital cannabis art to be sold as NFTs
It was only a matter of time before cannabis and the emerging non-fungible token (NFT) space collided. New York-based Califari is partnering with private equity firm Merida Capital Holdings to develop a platform that will sell one-of-a-kind pieces of cannabis art. The company will introduce five digital cards in time for 4/20 that will showcase artists' interpretation of cannabis strains including Grand Daddy Purple and OG Kush. While the NFT wave has certain nabbed investors' attention, there are some signs that the NFT bubble may have already popped.

Analyst Call of the Week - Aphria
Aphria reports its fiscal third-quarter on Monday, with analysts expecting the company to report $163 million in revenue, while posting $14.9 million in adjusted EBITDA. Alliance Global Partners Analyst Aaron Grey raised his 12-month price target on Aphria's stock to $26 from $20 with a "buy" rating on the stock ahead of the quarterly results to account for a higher valuation ratio over the next year. Grey does note that Aphria's sales should come down by 4 per cent sequentially to about $167 million as a result of COVID-19 lockdowns on customer purchases but notes it could return to positive revenue growth given its brand strength in the market. Separately, two proxy advisory firms recommended Aphria and Tilray shareholders vote in favour of the merger between the two companies. The deal is expected to close by the end of the month. ​ For more on Aphria, click here.

CANNABIS SPOT PRICE: $5.73 per gram -- This week's price is down 0.7 per cent from the prior week, according to the Cannabis Benchmark’s Canada Cannabis Spot Index. This equates to US$2,095 per pound at current exchange rates.