Cannabis sector on track to be a big market in Canada and the US: Brian Madden

Legal cannabis sales are poised to surpass the US$50 billion mark in 2025, according to a new report from industry consultancy New Frontier Data. The bulk of those legal sales will come from the adult-use market, with the near majority of that being accounted for in North America, and should be about double medical sales by 2025, according to New Frontier Data. The consultancy estimates that there are more than 268 million marijuana consumers globally, a significant ​base of users who could help fuel further social acceptance and normalization of cannabis use.

Outside of North America — which has the highest rates of social acceptance for cannabis use and the most advanced consumer markets — will remain a smaller market until countries move forward with their own legalization efforts. Europe is poised to lead with just US$206 million in legal cannabis sales in 2020. However, legal sales will be a fraction of the US$391.3 billion in cannabis sales estimated to come from the illicit market, a figure that should provide ample ammunition for cannabis activists looking to convince policymakers to legalize the drug. Interestingly, the price of a gram of cannabis is viewed to be the highest in the United Arab Emirates at $40, a country that has jailed dozens of expatriates who have been found to have trace amounts of THC in their system. 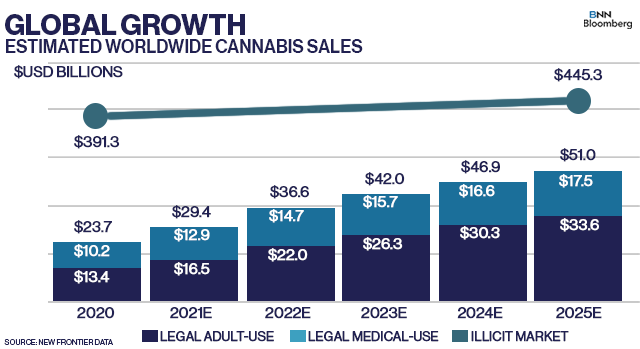 Tilray announces plans to close B.C. facility, to let up to 170 staff go

Canadian cannabis giant Tilray is shutting down its Nanaimo, B.C. facility, a move that one local news outlet expects will result in the layoff of up to 170 staff. The move, part of Tilray's efforts to cut costs following its merger with Aphria, will see the facility close in several phases and is expected to be completed early next year. The Nanaimo facility also helped serve as Tilray's headquarters prior to its deal with Aphria, and at its peak employed around 300 people. The company is said to have offered people impacted by the facility closure to work at its Broken Coast cultivation facility on Vancouver Island.

Another European country has made a significant leap in legalizing cannabis. Finland's Green Party - which holds 20 of the country's 200-seat parliament - passed a new initiative during a party conference on Sunday that called for the legalization of cannabis in Finland. The party is now the first political party in Finland that holds seats in its parliament to support legalization, which also specified that criminal convictions for cannabis use should be scrubbed from one's record. According to a poll in 2018, roughly 18 per cent of Finnish people believed that cannabis should be legally available for sale. Meanwhile, Germany's upcoming election could see pro-cannabis parties take a bigger share of influence in the Bundestag, although it's unclear where recreational cannabis reform policies rank on the priority list for German politicians, MJBizDaily reports.

The World Anti-Doping Agency said it plans to reconsider its ban on cannabis use by athletes, just under three months after American track star Sha’Carri Richardson couldn't compete in the Tokyo Olympics due to a positive marijuana test. While cannabis will remain prohibited in 2022, WADA said in a statement on Tuesday that it plans to conduct a scientific review of the drug on its Prohibited List. The review comes after an outcry from cannabis activists who say the WADA guidelines were outdated following Richardson's ban, which came after she said she smoked cannabis to help cope with the stress of her mother’s recent death. 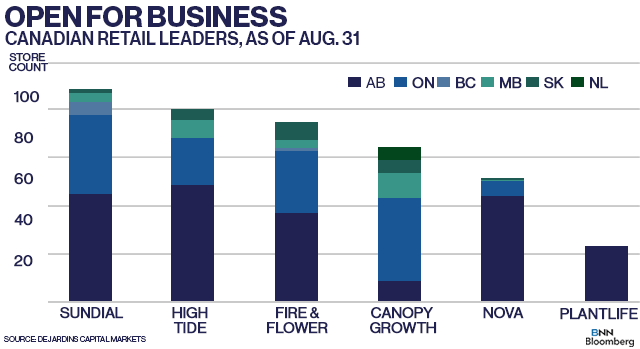 Analysts took a mixed view following the release of second-quarter results from Canadian cannabis retailers High Tide and Fire and Flower earlier this week. Fire and Flower reported $43.3 million in sales, which came below expectations of $46.5 million, while adjusted EBITDA beat analyst forecasts with $3.1 million in the quarter. Meanwhile, High Tide said it generated $48.1 million in revenue and $1.5 million in adjusted EBITDA in its second-quarter, while analysts expected $46.5 million and $3.9 million, respectively. Echelon Capital Markets highlighted how COVID-19 lockdowns, particularly in Ontario and Alberta, impacted retail sales in the quarter, while the emergence of aggressive pricing strategies in the marketplace weighed on the retailers as well. Echelon went on to note that these retailers should anticipate lower retail margins after moving to a discount-retail model to help expand market share. Desjardins' John Chu points out that High Tide's upcoming discount retail brand Cannabis Chop Club could act as a revenue driver and help offset some of the industry’s pricing and competitive pressures, but it could also take some time to become profitable.

CANNABIS SPOT PRICE: $5.10 per gram -- This week's price is down 1.4 per cent from the prior week, according to the Cannabis Benchmark’s Canada Cannabis Spot Index. This equates to US$1,824 per pound at current exchange rates.

- The amount of carbon that cannabis producer Hexo said it offset in a statement released Thursday. The company said it achieved its goal to become carbon neutral in September, which includes offsetting the personal emissions of its 1,200 employees.