The tipping point of decriminalizing cannabis in the U.S. has occurred amid COVID restrictions: Bruce Linton

Despite clustering, cannabis stores shouldn't mind being too close to their competition

Canada's burgeoning cannabis retail sector may be getting a little too close for comfort, but that's apparently a good thing.

There are 30 cannabis stores open or that have applied to open along a five-kilometre stretch of Queen Street West in Toronto, while other pockets across the city such as Kensington Market and Yonge Street also show signs of pot shop clustering.

The close concentration of cannabis retailers was brought into focus earlier this week when Ontario NDP MPP Marit Stiles tabled a private member's bill that would allow the province's municipalities to avoid situations where some neighbourhoods have no pot shops while others have a strip of multiple cannabis shops.

While private member's bills don't often become law, it certainly did highlight a concern some cannabis retailers are likely to have — and one exasperated by the fact that when retailers initially applied to the provincial regulator, they were often blind to the location of other shops.

However, some academics who closely study retail economics say clustering isn't a bad thing at all.

There are two main reasons why businesses typically cluster together, according to Larry Plummer, an assistant professor at Ivey Business School at Western University. Plummer said the first is that some companies need to be located close to each other to access "factor markets" for things such as labour and supply materials as well as be near to ports and harbours for shipping and distribution. The other reason, which applies to cannabis firms, is to be close to consumer markets.

Plummer cites New York City's "Jewellery District" in Manhattan as a prime example of how clustering can work for retailers.

"This kind of clustering acts as a ‘shopper's mall effect’ on a consumers' preference," Plummer said in a phone interview. "They're going to be able to find exactly what they're looking for rather than taking the odd chance of selecting a place that's out in the middle of nowhere."

David Soberman, a professor at the Rotman School of Management at the University of Toronto, said that spreading out stores assumes that there's an equal amount of efficiencies derived from their distancing, as well as that consumers are uniformly distributed between retailers. He said that this isn't always true and that what’s happening in several Toronto neighbourhoods is that demographics and where cannabis consumers live are likely leading to a clustering of pot shops.

"These are areas of the city where you have a lot of avant-garde avenues that are considered to be the chic area of Toronto. And this is the sort of demographic where there is a high degree of interest in cannabis and cannabis products," Soberman said.

Soberman, who said a lot of the challenges faced by cannabis retailers could be solved by researching game theory, adds that consumers are likely to benefit from the ability to price-compare offerings, given that all cannabis stores are unable to largely differentiate themselves through products available for sale. However, retailers can also capture consumer interest by appealing to certain demographics such as in how they educate new users or targeting consumers more comfortable in a luxury-type setting.

SPAC forces merger of Californian cannabis operators, with Jay-Z in the C-Suite

Jay-Z has added a new title to his long list of achievements: Chief visionary officer of The Parent Company. That's the new California cannabis operator forged through a three-way merger of Caliva, Left Coast Ventures and Subversive Capital Acquisition Corp., a special-purpose acquisition company listed on the NEO Exchange. The combined company has pro forma revenues of US$185 million in 2020 and US$334 million in 2021, according to a press release. The new company will look to put its stamp on the Californian cannabis market, but will also leverage Jay-Z's Roc Nation and the firm's broad list of artists and celebrities for potential branding opportunities.

Aurora Cannabis is heading to Israel. The Canadian pot giant struck a two-year deal to supply Israeli medical cannabis operator Cantek Holdings with 4,000 kilograms of bulk dried flower annually. The flower will be processed into finished product and co-branded under the Aurora and Cantek brands, according to a press release.

RBC Capital Markets analyst Douglas Miehm said in a report that the supply deal could see Aurora's international medical business nearly triple to $43 million in sales by fiscal 2022 and benefit the company's bottom line due to the higher pricing and gross margin profile typical of foreign cannabis sales.

Mexican president extolls move to legalize cannabis by next month

Mexico continues to inch forward towards becoming the next country to legalize cannabis, with Marijuana Moment reporting that Mexican President Andrés Manuel López Obrador said legalizing will likely take place in the current legislative period. "Things do not have to be prohibited, prohibited, prohibited," Obrador said. "If something is authorized, if something is allowed, well, act responsibly. I believe that this will happen in this new legislation on the use of marijuana. Have confidence in people and seek to do good." Mexico's Senate overwhelming approved a bill to legalize cannabis last week and will now head to the nation’s Congress for a broader vote. The court-mandated deadline for Mexico to legalize cannabis is Dec. 15.

Raymond James analyst Rahul Sarugaser said in a report to clients on Wednesday that Village Farms — which operates the Pure Sunfarms cannabis business — is trading at a 35 per cent discount to its peers, based on a ratio of enterprise value to EBITDA. Sarugaser adds the discount is rather "ironic" given that Village Farms may be one of the few Canadian cannabis players that would stand to benefit from U.S. legalization given its various cultivation assets south of the border. Village Farms also secured a new medical cannabis supply deal with Shoppers Drug Mart. Its Pure Sunfarms brand made some headlines with a CBD-infused gummie product launched in Hong Kong.

"With a federal legislative change in the U.S., Village Farms would be one of the very few Canadian LPs that benefits directly." Rahul Sarugaser, Raymond James analyst.

CANNABIS SPOT PRICE: $5.94 per gram -- This week's price is up 1.3 per cent from the prior week, according to the Cannabis Benchmark’s Canada Cannabis Spot Index. This equates to US$2,067 per pound at current exchange rates.

“New Jersey is a watershed event—what will happen is that Pennsylvania, New York and Connecticut will now go adult use.” Curaleaf executive chairman Boris Jordan on how the U.S. will continue to legalize cannabis following New Jersey's vote approving adult-use sales earlier this month. 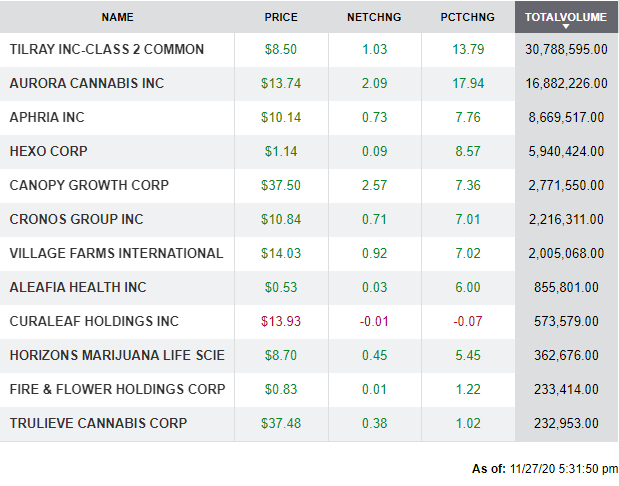