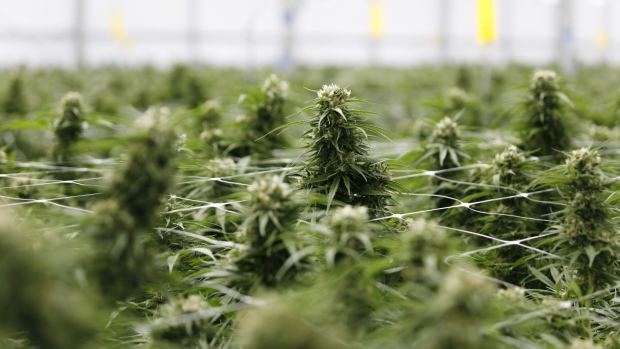 Canadian cannabis market expected to peak in 2026 to nearly $9B: Brightfield

Canada doesn't have a lot of time until its cannabis market hits its ceiling.

Brightfield Group expects Canada's cannabis market will peak around 2026 to the tune of about $9 billion in annual sales, a time by which the cannabis consultancy sees enough retail stores open to handle demand while enough consumers have successfully transitioned to the legal market, according to a new report.

"The massive growth that we've seen this year and the next probably year or two is going to taper off because ultimately, there's only so many new users that are coming online over the longer term," said Jamie Schau, insights lead at Brightfield Group and the lead author of the report, in a phone interview. 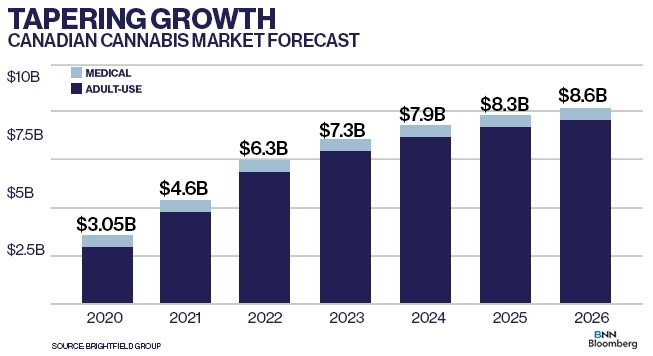 Now, growth is expected to continue at a solid pace for the next couple of years with more stores set to come online in Ontario, B.C., and other provinces. But as Schau points out, the number of restrictions imposed in the Canadian market – such as THC potency limits on edibles – will continue to place a hard ceiling on how big the industry can get.

The report also states how advertising and packaging restrictions set by the federal government have had a significant impact on the sector, which limits competitors' ability to differentiate their products – from both the legal market and their illicit counterparts – as well as help to ease stigma and garner customer loyalty. Other regulations that could be eased to help foster further growth include lowering tax rates, allowing for more efficient licensing, and less provincial "middle-men" in the supply chain, the report said.

"A huge part of the market is heavier, more experienced users and 10 milligrams of THC is just simply not what they're looking for," Schau said. "Essentially, they've got to leave the legal market for the products that they want."

Schau - who has been studying international cannabis markets for the past six years at Brightfield - did highlight that Canada's cannabis beverage sector is poised for rapid growth over the next few years. She points out how major alcohol brands such as Molson Coors and Constellation Brands have entered the market with heavy investment in creating pot-infused beverages, but may be frustrated by the limitations on how many individual drinks consumers can buy.

"We expect down the line that the conversation between the government and industry will take place because there's a tremendous amount of interest in changing the rules to appeal to legal users for that infused product," she said.

Other potential opportunities that the Canadian cannabis industry could pursue include a greater variety of edible products such as more savoury and baked options, higher potency vapes, and smaller pre-rolls in larger pack sizes, the report finds. As well, more work needs to be done to help brands stand out given that one-quarter of Canadian cannabis buyers surveyed earlier this year by Brightfield said "all cannabis brands are pretty much the same" and a similar percentage were unsure of what dosage they preferred.

"At the end of the day, when your consumer is just looking for an excuse to be able to consume legally, you can pretty much put any product out there and it'll fly off shelves," Schau said.

"But now that it's regulated and sophisticated consumers are looking for frankly a better quality product, you can't pull that off anymore. You can't just throw a product at the wall and hope it sticks."

Pot stocks help lift TSX to post 7.37% gain in Q1 2021
Canadian-listed cannabis stocks helped lead the country's main stock exchange to post a 7.37 per cent gain through the first quarter of the year. That places Canada to rank 34 among its 92 global market peers, sandwiched between the Bloomberg European 500 Index and Mexico. The Toronto Stock Exchange's health care index posted a nearly 40 per cent gain in the first quarter, much of it led by investor enthusiasm on cannabis stocks amid signs the U.S. market is making major moves to legalize pot. Aphria and Organigram led the TSX's gainers during the period, rising 162 per cent and 156 per cent, respectively.

New York, New Mexico latest U.S. states to legalize cannabis
Two more U.S. states legalized cannabis last week, with one more expected to finalize its plans to make recreational use and possession of marijuana legal. The Big Apple turned a bit greener on Wednesday after New York Governor Andrew Cuomo signed into law a cannabis legalization bill that provides one of the more progressive legal pot markets in the world The legislation earmarks social equity partners will receive half of the state's licenses and revenue from adult-use sales while also permitting consumption lounges and 12 plants per household for home cultivation. Recreational sales are expected to begin as early as next year. Meanwhile, New Mexico legislators late Wednesday also approved a bill to allow recreational use of the drug beginning next year, needing the stroke of its Governor's pen to make it into law. Lastly, Virginia's Governor requested the state's politicians agree on terms of its cannabis plans to begin adult-use sales as early as July. All of this comes as Senate Majority Leader Chuck Schumer stated he plans to soon release a new cannabis reform bill that would address federal legalization issues.

U.S. feds probing allegations of pay-to-play at Green Thumb Industries
U.S. federal investigators are looking into U.S. multi-state operator Green Thumb Industries over allegations of its involvement in campaign donations or other activities to secure growing and distribution licenses in several states, according to the Chicago Tribune. News of the investigation led to an 11 per cent decline in GTI's share price on Tuesday, while also weighing on other U.S. cannabis companies. A company spokeswoman said Green Thumb Industries was not aware of any probe, while GTI CEO Ben Kolver took to Twitter to deny the allegations, calling them "unfounded." The company also issued a press release demanding the Tribune retract its article, but the newspaper's editor-in-chief said it stands by its reporting and will continue to pursue the story.

48North pulls plug on outdoor grow two years after harvesting first legal crop
Maybe growing cannabis outdoors in Canada isn't all it's cracked up to be. 48North, one of the country's first legal cannabis producers to seek an outdoor cultivation license, announced Monday that it would no longer plant its crop for the current year's harvest. 48North said that 20 per cent of its staff will be laid off as a result of the move, which is also said to save the company about $5 million. The company attributed an oversupply of cannabis in the Canadian market as well as a strategic shift toward processing products, rather than cultivation, in a release. 48North also said it would part with its CFO after less than a month of employment, while Kristen Gauthier, who was both the company's head of marketing and "growth", will also leave despite a promotion to a new role less than two months ago.

Analyst Call of the Week - Medipharm Labs
Barrie, Ont.-based Medipharm Labs, which mainly extracts oils from cannabis plants for vapes, edibles, or other products, reported fourth-quarter results that came in ahead of revenue expectations. Medipharm said it generated $6.1 million in sales in its fourth quarter, but still posted an adjusted EBITDA loss of $8.8 million following a $10.7 million inventory writedown as well as other writedowns on deposits and depreciation charges. The results led several analysts to reduce their 12-month target prices on the company's stock, with ATB Financial's David Kideckel moving to $0.60 a share from $1.10, while Canaccord Genuity's Shaan Mir targets $1 from $1.75, and Alliance Global Partners' Aaron Grey now sees Medipharm at $1.25 from $2. In a report, Kideckel said Medipharm's sales and margins will continue to be pressured by oversupply and increased competition in the Canadian market, while international sales visibility appears to be lacking. ​

For more on Medipharm Labs, click here.
CANNABIS SPOT PRICE: $5.77 per gram -- This week's price is down 0.8 per cent from the prior week, according to the Cannabis Benchmark’s Canada Cannabis Spot Index. This equates to US$2,079 per pound at current exchange rates.