Canadian cannabis sales projected to double to $8.8B over next five years: report

The pace of sales in Canada's cannabis market may be slowing down, but it is still expected to double over the next five years, according to a new report.

That's the big takeaway from the latest market insights by Chicago-based industry consultancy Brightfield Group, which noted that doubling will come as more retail stores come online and regulations loosen.

Brightfield said it expects Canada's cannabis market to grow at an annual rate of 10 per cent over the next five years to $8.8 billion, driven by increased sales in edibles and vape products.

"While we saw strong growth in the market in 2021, there's still a great deal of additional potential for the market through the forecast period, especially with additional access to retail," said Bethany Gomez, managing director of Brightfield Group, in an interview. 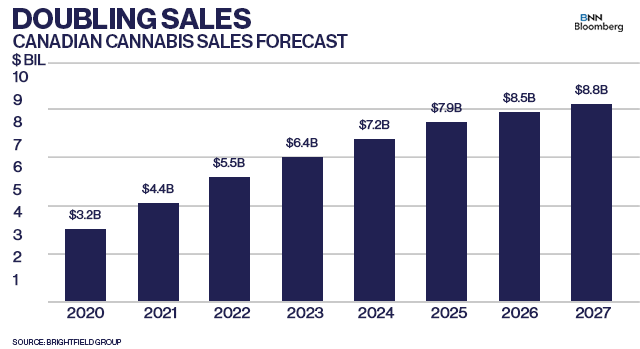 While sales of edibles and drinks are projected to continue dwarfing the dried flower segment, both will have sizeable annual growth rates that are poised to benefit from regulatory changes that should come online sometime in 2024, the report said. Those changes would likely see potency limits raised from 10 milligrams of THC, which would help drive more illicit users to legal retail channels, Gomez said.

"With edibles right now, that market has really been artificially constructed, because of those dosage restrictions," she said. "In Canada, that it makes it very difficult for that to be a scalable or attractive market."

Gomez also believes there will be a greater emphasis on premium products going forward as cannabis producers look toward the segment to help stand out from their peers. That trend has begun in earnest over the past year with companies like Canopy Growth Corp. snapping up Supreme Cannabis Inc. and Aurora Cannabis announcing it's buying Thrive Cannabis earlier this week, deals that were emphasized by the acquiree's premium portfolio.

Those niche craft companies have quickly outpaced their larger and more capitalized counterparts by developing a reputation for strong quality which has yielded a near-cult following for some consumers, Gozes added.

"They're now looking to scale beyond their small corners of the market where they started out," she said. "Where there's competition from these kind of craft segments, they gain attention at the larger scale and those bigger companies try to emulate that or just acquire into that."

Going forward, Canada's cannabis market is on pace to mirror similar growth trajectories seen in U.S. states that previously legalized cannabis, such as Colorado, where rapid growth in the first few years were followed by a levelling off period, Gomez said.

Cresco Labs bulks up after US$2B deal for Columbia Care

U.S. cannabis operator Cresco Labs is getting bigger after announcing Wednesday it was acquiring Columbia Care for about US$2 billion. The deal, which is the biggest merger in the cannabis industry thus far, will see Columbia’s shareholders receive 0.5579 of a subordinate voting share in Cresco for each of their shares. Once the deal closes, expected by the end of the year, Cresco will emerge as a U.S. cannabis juggernaut with operations in 17 states plus the District of Columbia, 133 retail outlets and pro forma annualized revenue of about US$1.4 billion. It will also give Chicago-based Cresco the top market share in several key U.S. states and give it a leading position in New York and New Jersey, where recreational sales are beginning this year.

Aurora Cannabis bolstered its premium product portfolio after acquiring privately-held Thrive Cannabis for $38 million, the company announced on Wednesday. The deal, which may see an additional $20 million paid out if certain financial milestones are met, will also see Thrive’s team lead Aurora’s recreational business. Aurora said acquiring Thrive will provide immediate positive adjusted EBITDA. Analysts were mixed on the deal, noting it will add to the company’s bottom line and focus on the market’s premium segment, but will only result in marginal market share gains (Thrive’s Greybeard brand has about a 0.5 per cent share of the market).

It turns out all those cannabis sales during the past two years weren’t necessarily driven by the pandemic after all, according to a recent study published by the Drug and Alcohol Review. The study, authored by Brock University Associate Professor Michael Armstrong, concluded that rising cannabis sales in Canada are attributed to a combination of pre-existing trends such as new product arrivals and increasing retail outlets. The study further found that there was no statistically significant or economically meaningful level change in cannabis sales when the pandemic began. “We found little evidence of pandemic impacts on Canada's aggregate legal cannabis sales. We therefore caution against attributing increased population-level cannabis use or health impacts primarily to the pandemic,” the report concluded.

Canopy Growth is appealing a lawsuit brought forward by the Canada Revenue Agency after the pot company was fined $434,611 for allegedly growing cannabis on a Saskatchewan farm before receiving a tax-related licence. The company argues the tax agency mistakenly fined Canopy because it was indeed producing pot per its licence and asked the court to waive or reduce the penalty issued by the CRA. "The plaintiff is not and was not at any time a producer of illicit cannabis products," a Canopy subsidiary said in a court filing. At the heart of the dispute is a Canopy subsidiary that grew cannabis in 2019 for “research purposes” before it formally obtained a licence under the Excise Act in July.

Another Canadian pot company bit the dust on Friday. Eve & Co announced it is seeking creditor protection under the Companies' Creditors Arrangement Act on Friday after disclosing it made “careful consideration of all available alternatives.” Eve & Co attempted to focus on developing female-focused cannabis brands for the Canadian market, generating about $2.5 million in its latest quarter but struggled to pay down the $29 million in debt and other liabilities it carried on its balance sheet. Eve & Co said it agreed to receive a $2.2 million debtor-in-possession loan from Deans Knight Capital Management to help finance its operations going forward.

Cannabis stocks broadly moved higher in late Thursday trading, extending gains into Friday’s session before paring those advances, following news that the U.S. House of Representatives would vote next week for the second time on a bill that would decriminalize marijuana. The volatile sector saw many names post double-digit gains on Thursday after news that the House will soon vote on the Marijuana Opportunity Reinvestment and Expungement (MORE) Act, which was already passed in a previous Congressional session. However, investors taking short positions on several cannabis stocks may have felt a bit of a squeeze given the aforementioned rally with one analyst seeing US$260 million in losses on short bets taken on just four Canadian pot companies – Canopy Growth, Sundial, Tilray and Aurora Cannabis. 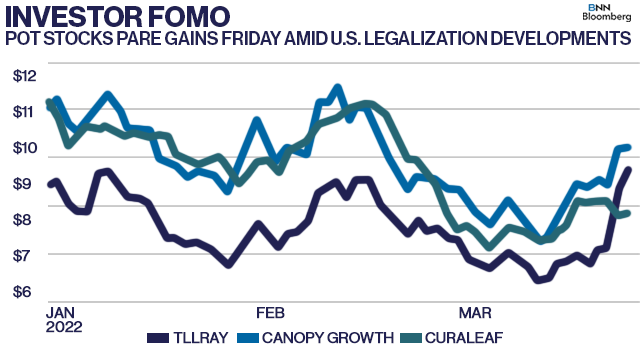 Politico reported that it is unlikely that the MORE Act will be passed into law given that Senate Majority Leader Chuck Schumer has his own legalization bill he plans to introduce next month. The Senate, however, did unanimously pass a bill that would make it legal for scientific and medical research on marijuana and its compounds. While eyes remain attuned to the federal landscape, New Jersey’s plans to begin sales of recreational cannabis were delayed after a state commission determined that the cultivators and retail outlets in the state didn’t have enough inventory to meet customer demand, NJ.com reports.

Cronos Group announced earlier this week that its former CEO Mike Gorenstein would be returning to the role following the retirement of Kurt Schmidt effective Mar. 21. The move caught many industry observers by surprise as Schmidt’s appointment as CEO was notable given his extensive background in the consumer-packaged-goods (CPG) industry. BMO Capital Markets Analyst Tamy Chen said in a note to clients this week that Schmidt’s departure may be a cautioning sign that executives with CPG experience may not be the most appropriate skill set to navigate the cannabis industry given the sector’s evolving regulatory frameworks and unpredictable nature of product innovation.

“What has become apparent among several LPs is that what these professionals have in cost rigor and brand management, they sometimes lack enough agility and awareness of the sector's differences from legacy CPG,” she notes. Chen said that she doesn’t believe that this executive announcement will generate any headwinds for Cronos in the near-term, and she maintains a “market perform” rating and $4 per share price target on the company’s shares.

-- This week's price is up 1.1 per cent from the prior week, according to the Cannabis Benchmark’s Canada Cannabis Spot Index. This equates to US$1,884 per pound at current exchange rates.

- The listed price for Tilray's facility in Nanaimo, B.C. which was put up for sale after the company disclosed last year it would leave the city. The decision would lead to Tilray shedding about 170 employee positions, the CBC reports.