Canopy is at mercy of capital markets: Stifel's Andrew Carter

While the industry may have been happy to accept an onerous excise tax regime in exchange for Canada’s legalizing recreational cannabis sales back in 2018, fast forward to today and those fees have become an anchor that has dragged down the country’s producers, both large and small, which have struggled to become profitable.

Canadian and provincial governments typically receive as much as 40 cents of every dollar spent on a cannabis product, with the producer themselves netting the remaining 60 cents, according to data provided by the Cannabis Council of Canada. That contrasts with figures from July 2019 when governments only received 25 cents of every dollar spent on cannabis, with producers getting the remaining 75 cents. 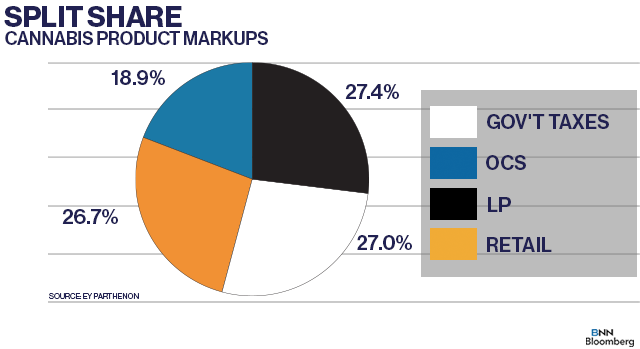 That combination of taxation and the mark-ups made by provincial distributors have created a challenging regulatory environment that threatens the stability of Canada’s legal cannabis industry, said George Smitherman, the president of the Cannabis Council of Canada and former Ontario health minister, in an interview on BNN Bloomberg Friday.

“There’s been a lot of price compression, particularly in the dried flower categories which are the dominant [products in the market],” he said. “If you look over the trend over the past two or three years, cannabis producers have been, in a certain sense, subsidizing the price of that dried flower for the consumer. While those prices have compressed, the government taxation has not and therefore become a larger share of the pie.”

“That’s impossible to compete with the legacy markets. In this environment, pretty much nobody, regardless of their size or focus or what province they’re operating in, is able to stick profitability. It’s so elusive.”

That taxation pressure, alongside other issues like edible potency limits and packaging restrictions, are among the top points that Smitherman is looking to address when he hosts a gaggle of Ottawa parliamentarians next week. The country’s biggest cannabis industry trade group will be hosting a two-day event called “Grass on the Hill” in Ottawa this Monday where Smitherman will try to bend the ear of decision-makers to help kick start a formal review of the industry by Health Canada.

In doing so, Smitherman will be armed with fresh data from industry consultants EY Parthenon and polling information from Abacus Research to demonstrate just how challenging the legal market remains. And the industry itself has been no slouch – a recent report by Deloitte found that the cannabis industry has generated more than $15 billion in direct and indirect tax revenue for Canadian and provincial governments, while creating more than 151,000 jobs since Canada legalized recreational use of the drug in Oct. 2018. 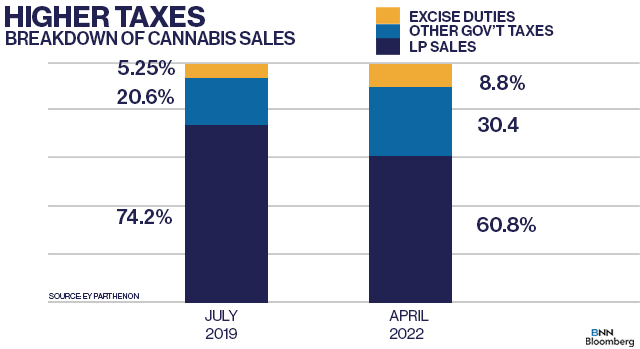 “The legacy markets are thriving and in certain categories because of regulatory challenges, they’re crushing it,” he said.

While Ottawa recently announced plans to establish a strategic panel led by the Department of Innovation, Science and Economic Development to help spur growth in the sector, the Cannabis Act itself mandates that the legislation will be reviewed three years after it was passed into law. That review, scheduled to last 18 months, has yet to happen and some industry participants privately told BNN Bloomberg that the longer the review takes, the harder it will be to remain operational.

Smitherman notes that the risk in maintaining the status quo could wind up accelerating the steady stream of cannabis companies that have either closed their doors, declared bankruptcy

“We’re going to lose out on the opportunity to grow the market and to achieve the objectives of the Cannabis Act, which includes getting more consumers interested in getting products that are more tested and therefore, much safer [than legacy products],” Smitherman said.

Canadians bought more than $358.8 million worth of cannabis in March, an annual increase of roughly 20 per cent, according to Statistics Canada. Sales were up 10.7 per cent from the prior month, while retail activity was flat on a per-day basis compared to February, the StatsCan data showed. All provinces reported sales increases in March, while B.C. led all provinces with the biggest monthly increase with 21 per cent. Canada's legal recreational pot market now operates at an annual run rate of about $4.3 billion, according to the StatsCan data.

The Ontario Securities Commission dropped several charges made against three CannTrust Holdings executives ahead of a late 2022 trial, according to the Canadian Press. Peter Aceto, Mark Litwin and Eric Paul had prior charges of making false or misleading statements to the OSC through CannTrust press releases dropped, a spokesperson for the province's securities regulator said. The dropped charges will help reduce the length of the trial, which is said to take place from October to December and is expected to be a "complex" prosecution, an OSC lawyer said during a pre-trial hearing. The three former executives still face a myriad of charges including fraud, allegations of insider trading and making a false prospectus.

Boston Beer Co., the makers of Samuel Adams beer, has officially entered the cannabis arena. But they’re not compromising their beverage roots. The company announced Monday it launched a line of cannabis-infused tea with five milligrams of THC per can under the TeaPot brand. The new infused teas will be on Canadian shelves this July, part of an effort to test cannabis products here before building out a global brand, according to Bloomberg News. Cannabis drinks still account for about two per cent of the Canadian market, or roughly $81.3 million in sales over the past 12 months, according to industry data tracker Hifyre. Boston Beer said in a release that Windsor, Ont.-based Peak Processing Solutions will produce their new teas, while Entourage Health Corp. is responsible for distribution.

Rhode Island became the 19th state to permit recreational cannabis sales after Governor Dan McKee signed off on a legalization bill on Wednesday. The bill was signed after the majority of Rhode Island’s General Assembly voted in favour of the legislation passing on Tuesday. McKee’s office said their legalization efforts are intended to make the distribution of cannabis equitable, controlled and safe, according to the Associated Press. The bill legalizes the sale and possession of up to one ounce of marijuana for adults 21 and older, and allows residents to grow small amounts at home as long as personal home possession does not exceed ten ounces. Recreational sales is set to kick off this December with thirty-three cannabis retailers allowed in the state. Meanwhile, more than 80 per cent of Georgia voters supported legalizing recreational cannabis in a non-binding advisory question on the state’s primary election ballot, Cannabis Business Times reported.

Despite the legalization of non-medical cannabis in Canada and several U.S. states, displacing the illicit market continues to be complicated by price and convenience factors, according to a study published in the Journal of Studies on Alcohol and Drugs. The study incorporated survey data from an International Cannabis Policy Study where more than 11,650 cannabis consumers were asked to gauge their reasons behind purchasing from the illicit market. Canadians factored higher prices and inconvenience as a deterrence in legal purchase decisions, the study found. Consumers in provinces with expensive legal cannabis but accessible retail were more likely to report price as the primary barrier to moving out of the illicit space, and consumers in regions with inaccessible retail but lower price options cited inconvenience as the biggest factor in sticking with their dealer.

Weighing in on Canopy's Q4 results

Canopy Growth reported disappointing fourth-quarter results on Friday, with revenue down 25 per cent to $111.8 million and a net loss of $578.6 million. The company’s shares plunged following the release of its latest quarterly results, falling as much as 17.8 per cent on the Toronto Stock Exchange before paring some of its losses. Canopy CEO David Klein appeared on BNN Bloomberg on Friday to discuss the results.

Understandably, analysts had their knives out for Canopy after their Q4. Alliance Global Partners’ Aaron Grey said in a note that Canopy is still “trying to right the ship” and that he warns clients to be cautious on the ability for the company to stem market share losses amid a strategic shift to premium products. Grey, who maintains a “neutral” recommendation and a $7 price target on Canopy’s shares, said the return to negative gross margins is a concern and that breaking even on EBITDA remains elusive despite the company forecasting it happening in the fiscal 2024.

Stifel’s Andrew Carter doubts Canopy’s EBITDA breakeven forecast can happen within that time frame with the current cost structure and that the company must take “aggressive action” for it to remain viable. Carter - who maintained a “sell” recommendation on Canopy's stock but reduced his price target to $5 per share from $6 - also highlights Canopy’s growing net debt position, especially with a $600 million convertible note due in June 2023 that could see the company’s main benefactor Constellation Brands emerge as both a creditor and investor.

Meanwhile, Cowen's Vivien Azer nearly cut her target price on Canopy's stock in half to $6.50 from $12.50 after highlighting Canopy's third consequtive quarterly revenue decline amid its struggle to generate momentum in the Canadian recreational market. She maintains a "market perform" recommendation on the company's stock.

-- This week's price is down 0.97 per cent from the prior week, according to the Cannabis Benchmark’s Canada Cannabis Spot Index. This equates to US$1,807 per pound at current exchange rates.

- The size of the intraday decline experienced by Aurora Cannabis on Friday, a day after the company announced it struck a deal to raise US$150 million in new financing. While the company’s shares pared some of those losses by the end of Friday’s trading session, it was the biggest one-day drop in Aurora’s stock since 2014.