Canadians bought $353.6 million worth of cannabis in November with Ontario continuing to drive overall market growth, according to Statistics Canada.

The national data agency reported November retail sales figures on Friday that showed Canada's legal recreational pot industry currently operates at an annual run rate of about $4.24 billion. Cannabis retail sales fell 2.9 per cent in November from October, but rose by just 0.4 per cent on a per-day basis, and were up 35 per cent on an annual basis. 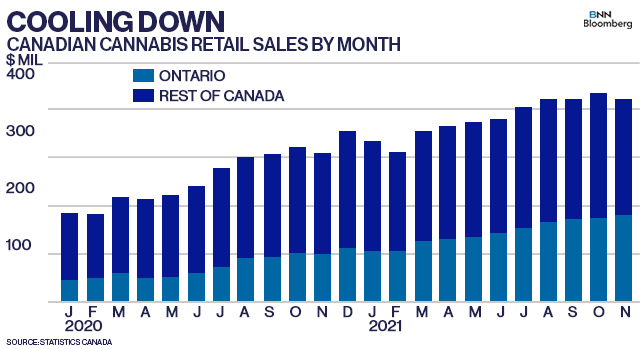 As usual, Ontario continued to drive the growth in Canada’s cannabis market with $148 million of legal pot sold in the province - one of only two (Saskatchewan is the other outlier) to report an increase in month-over-month sales in November. Ontario now represents 40.2 per cent of all cannabis retail sales in Canada, up from about 32 per cent a year earlier, the StatsCan data showed.

Craig Wiggins, managing director of The Cannalysts Inc., an independent cannabis research firm, said that while sales growth appears to have flattened, he notes that the sales velocity - the monthly trend of year-over-year retail activity - has stopped declining following a six-month slide.

Wiggins said that Ontario will continue to be the main driver of growth in the Canadian market as more stores open in strategic locations to avoid saturating the province, something that he said is being observed in Alberta.

It remains to be seen if the pace of growth in the Canadian market will continue to keep up with analyst expectations of the country's cannabis sector peaking at $8 billion in sales by 2025. That could be due to a potential overstating of initial estimates of the illicit market, Wiggins stated. Many consumers that buy in the illicit market may have already shifted over to legal stores, he noted.

"At the end of the day, I believe in the numbers I can see," he said. "So, the numbers are telling me that the market is still growing. It's just not growing at the same clip."

Early estimates suggest that November's sales decline may be short-lived. Cannabis data provider Hifyre forecasts that $370 million of cannabis was sold in December, although it should be noted that the firm's previous estimate of November's data point was off by about $15 million.

Hexo outlined plans on how it intends to become cash flow positive earlier this week, with cuts to the company's expenses, various optimization improvements, and divesting non-core assets all part of the company's long-term turnaround plans. The company first disclosed its turnaround initiative last month after delivering disappointing quarterly results, while incurring mounting debt, and misaligned supply-demand dynamics. Hexo's moves also come as the company is under pressure to report positive adjusted EBITDA to avoid breaking a covenant tied to the US$360 million in senior secured convertible notes it raised last year to help finance its acquisition of Redecan. If Hexo fails to meet that key financial metric, its lender could demand repayment of the loan in cash plus a 15 per cent premium and any accrued interest.

A new industry-funded report released by the British Columbia Chamber of Commerce finds the province has not allowed its cannabis industry to live up to its potential. The report, which was also backed by licensed producer Pure Sunfarms and cannabis retailer Kiaro, outlined more than a dozen recommendations that would help unlock "billions of dollars in private sector investments." Some of the recommendations listed include allowing retailers to use delivery apps like Skip The Dishes, removing taxes on vape products while amending excise tax limits, and placing an economic mandate for cannabis at the ministerial level. The report suggests that the illicit market continues to thrive in B.C. despite cannabis being made legal more than three years ago.

One year after U.S. President Joe Biden took office and it appears his various campaign promises on cannabis reform have failed to live up to expectations, according to a report in Marijuana Moment. The industry news site notes how the Biden administration has so far failed to decriminalize cannabis federally, has kept people in federal prison over non-violent marijuana offenses and has yet to reschedule the drug under the Controlled Substances Act. However, the Biden administration has continued to let states dictate their own cannabis policies, Marijuana Moment notes. It appears that cannabis reform has stalled as the White House is too focused on handling the coronavirus pandemic, according to Vice President Kamala Harris.

Thailand appears poised to be the next country to enact significant cannabis reforms after the Asian country's Health Ministry made several policy proposals aimed at loosening regulations. ABC News reports that the Thai government plans to drop cannabis from a list of prohibited narcotics or psychotropic substances while keeping a ban on high THC potency products. If the policy measures get approved - which appears to be likely - Thailand could emerge as a global legal cannabis hotspot which could help give the country's tourism industry a shot in the arm following the pandemic. Growing cannabis without permission will still be illegal, according to Thai police. 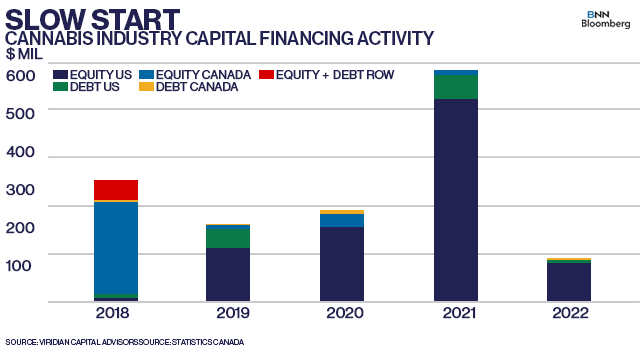 Capital financing activity in the cannabis sector got off to a slow start in 2022 as a broad-based decline in stock prices put a blanket on equity raises, according to Viridian Capital Advisors. So far, just US$117 million has been raised in either equity or debt financing in the first two weeks of this year, the lowest amount in five years. That’s also down from US$619 million during the same period a year earlier, Viridian said in a report. The firm noted the muted financing activity may also be a result of a slowdown in retail revenue, ongoing frustrations about a pathway toward U.S. federal legalization and the prospect of higher interest rates casting a pall against growth investing. Viridian sees some potential catalysts emerging to break out of the current financing malaise including consolidation, a "surprise enactment" of U.S. legislation to allow banks to conduct financial services with pot companies or more announcements of stock buyback plans.

This week's price is up/down x per cent from the prior week, according to the Cannabis Benchmark’s Canada Cannabis Spot Index. This equates to US$1,829 per pound at current exchange rates.

- The amount of cannabis sales made in Arizona in the first year of recreational cannabis legalization, according to the state's Department of Revenue.