Tilray Brands is focused on gaining back market share in Canada: CEO

As demand dynamics ease, pot businesses put their underperforming assets up for sale

As Canadian cannabis companies re-evaluate their operations in light of a massive supply-demand imbalance, many businesses are putting their cultivation facilities, pot shops, and warehouses up for sale, according to a report by The Canadian Press. A publicly-available list on a cannabis-focused consultancy company's website shows a wide variety of assets that companies are looking to salvage as industry dynamics have rendered many of those buildings either unprofitable, obsolete, or unneeded entirely. For example, one B.C.-based cultivation building listed for sale for $600,000 (or best offer) is described as a licensed processing facility that reported annual sales of about $600,000. Other businesses listed for sale on the website include a Quebec-based cultivator for $4.25 million and a downtown Toronto cannabis retailer that can be yours for the low price of $550,000.

Tilray kicked off the week with its fiscal second-quarter results, with sales coming in just shy of analyst expectations at US$155 million, while reporting a US$6 million profitable three-month period that led to a spike in the company's stock. Revenue was up 20 per cent from a year earlier but fell 7.6 per cent sequentially as the company's leading share of the Canadian cannabis market was hit by a crowded, hypercompetitive marketplace. Tilray CEO Irwin Simon said the company isn't willing yet to broadly discount its offerings to win back sales, a move that its competitors have done in recent months. He does see further consolidation in Canada's cannabis market to be a trend that will extend into 2022 as the company seeks a seemingly-elusive 30 per cent market share goal. In addition to the company's quarterly results, Tilray disclosed that it acquired two other craft beer brands for about US$5.1 million to add to its growing alcohol portfolio.

Slow and steady may be part of the secret sauce that has seen Organigram report better-than-expected quarterly results on Tuesday and solidly push the cannabis producer to become the fourth-biggest company in Canada by market share. The company reported $30.4 million in first-quarter revenue while taking an adjusted EBITDA loss of $1.9 million. The company also said it expects to reach profitability sooner than anticipated this year. Organigram CEO Beena Goldenberg told BNN Bloomberg the company often works with provincial wholesalers and a consumer group of 2,500 to determine what unique products it would like to sell, deploying one offering to the market and if it's a hit, find ways to sell more. That has led to increased demand for Organigram's products, resulting in a planned 50-per-cent expansion of its production facility later this year.

Headlines were abuzz with a newly-released research paper in the Journal of Natural Products that appeared to suggest that cannabis was found to prevent COVID-19 infection. However, those conclusions were widely debunked as the cannabinoids that were studied were derived from unique acids found in hemp plants, not cannabis itself. Those acids were able to bind to the SARS-CoV-2 virus’ spike proteins, which was able to disrupt their ability to attach to receptors in human cells, according to the Orlando Sentinal.  As well, the research was conducted in vitro, as within the controlled confines of a petri dish, rather than in a robust study using animals or humans, which could offer differing results. The lead researcher told Vice that the team wasn't able to fully study the effect of THC on preventing COVID-19 infection as it remains a controlled substance federally in the U.S. While the study may show promise in using a cannabinoid to treat illnesses such as COVID-19, further research needs to be done to conclude whether cannabis has any role in preventing further coronavirus infections.

Pot store awaiting approval to open in B.C. airport in a world's first

Travellers heading for a deal at the duty-free store may see a new product for sale after one cannabis retailer put the final touches on an application to sell legal marijuana at a small airport in British Columbia. Copilot is looking to open its outlet at the Prince George airport later this year, which would make it the first cannabis retail store in an airport terminal anywhere in the world, CTV News reports. However, those flying internationally would be out of luck for a pot purchase given current laws state it is illegal to take cannabis across federal borders. Canadians travelling within the country are allowed to carry up to 30 grams of cannabis on them as long as they're of legal age.

Oregon now at centre of U.S. illicit pot market with as many as 2,000 illegal growers

Despite ongoing efforts to make cannabis legal in various U.S. states, a thriving illicit market continues to operate unabated on both sides of the border. However, Oregon may have trumped California as the national center of illegal weed cultivation, according to Politco. The West Coast state is believed to have 1,000 illegal operations in a region of more than 4,000 square miles, the website reports, although state officials believe those estimates could be understated by 50 per cent. Despite it being legal in Oregon since 2014, these illicit players are flouting the law in broad daylight and competing with legal operators who are already struggling with the state’s high taxes and fees, Politico says. With so many illicit producers often operating under the guise of a hemp cultivator, wells are running dry, rivers are being illegally diverted and crime has spiked across the state. 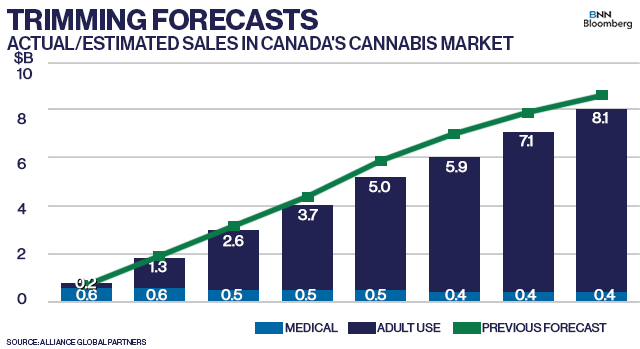 Cannabis sales in Canada jumped 49 per cent to about $3.9 billion in 2021, but that pace of growth is likely to be pared down in coming years as the number of new bricks-and-mortar (B&M) stores is expected to slow to a trickle, according to Alliance Global Partners Analyst Aaron Grey. Grey has now trimmed his estimate for Canadian recreational cannabis sales to $5 billion in 2022, from $5.4 billion, as a result of fewer stores opening this year.

"This deceleration is a function of fewer B&M expansion opportunities being available and a larger portion of the growth now being driven by taking share from the illicit market & bringing new consumers into the category – and we see innovation as a key driver to this." Grey projects Canadian recreational cannabis sales to reach $8 billion by 2025 and has also reduced his forecast for how the country's medical marijuana market will fare by that time to $400 million from earlier estimates of $1 billion. 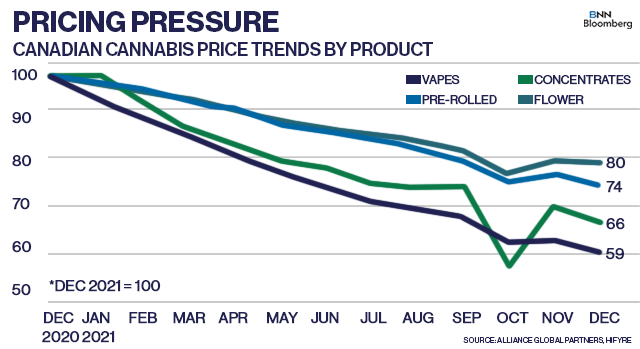 Another trend to watch in 2022 is how Canada's cannabis market will react to pricing pressure across all product categories, Grey said. Prices for dried flower - which represent the majority of retail sales - have fallen by 20 per cent over the past year, with larger volume offerings reporting the steepest price declines.

Vapes and concentrate products have also seen their prices plummet over the past year by 41 per cent and 34 per cent, respectively, according to Grey. Those price declines are expected to continue this year with the vape segment likely to fall substantially given the low barrier to enter the market with the cost of available biomass at record-lows.

That will ultimately see cannabis producers that operate at a low-cost generate more favourable margins, with Grey highlighting Village Farms International and its Pure Sunfarms business to continue operating with an industry-leading gross margin this year. Grey also notes that Village Farms was the only major producer to gain market share in December on a year-over-year basis, now holding about six per cent of the market.

-- This week's price is up 1.2 per cent from the prior week, according to the Cannabis Benchmark’s Canada Cannabis Spot Index. This equates to US$1,834 per pound at current exchange rates.

-- The number of drivers found to have THC concentrations in their blood above the Canadian legal driving limit of 2 nanograms/ml after cannabis was legalized in Canada, more than double the rate prior to Oct. 2018, according to a study by University of British Columbia researchers.