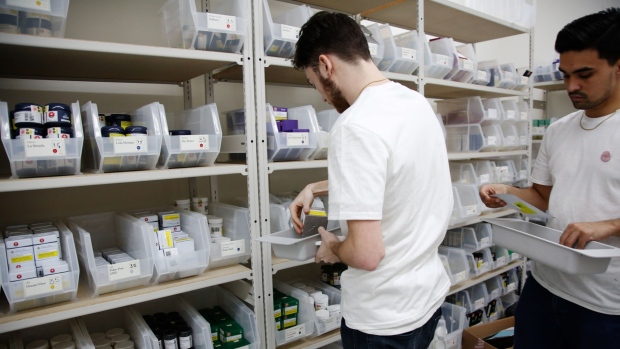 Sales of cannabis products continue to trend higher in Canada, but the pace is slowing down.

Canadian retailers sold $256.3 million worth of cannabis in September, Statistics Canada reported on Friday. That's up by just 1.8 per cent from the prior month, but more than double from the prior year, according to StatsCan. Taken on a per-day basis, cannabis sales edged up about 5 per cent in September from August.

"The Canadian market is featuring robust growth, but we continue to outline a negative approach overall for the Canadian producers with lofty valuations prevailing against uneven execution in a fragmented, difficult, and increasingly competitive category," said Stifel Analyst Andrew Carter in a report to clients on Friday

Much of that growth was led by Ontario, which saw a 5.3-per-cent sales increase to $77.9 million in September, while other big provinces such as Quebec and Alberta reported modest gains.

That alone could be a sign that cannabis sales may be plateauing in Canada. Despite the steady gain in the country's licensed cannabis operators, three provinces reported monthly sales declines in September, the first time that's happened in more than three months.

Omar Khan, who runs the cannabis practice for Hill + Knowlton Canada, said in an email that the sales figures show the legal sector is making slow but steady inroads against the illicit market.

He notes that pricing has gradually become more competitive, while Ontario - the country's largest consumer market - has more bricks-and-mortar stores open, and said many of the Cannabis 2.0 products are now of a higher quality than what’s available through illicit channels.

To keep sales from sagging further, Khan said that regulators should "keep this momentum going by exploring ways to boost margins for retailers, such as reducing the excise tax and letting retailers do home delivery in Ontario to give them a strong tool to further eat into illicit market share."

Further exasperating the problem is whether Canadians' homegrown cannabis harvests this fall will put a dent into dried flower sales. With most Canadians able to grow four cannabis plants at home for the second-straight year, there's a possibility that sales figures from October to December may face pressure from cannabis users who prefer to consume their own harvests rather than venture out in the middle of a pandemic to buy products from licensed producers.

The upcoming regulations on CBD in the U.S. could be impacted by new findings that show how the cannabinoid affects men and women differently. An official from the U.S. Food and Drug Administration (FDA) said that women may be more likely to use the non-psychoactive cannabis compound to alleviate pain, sleep difficulties, anxiety and other health issues. Another finding discussed by FDA officials was that women can experience twice as much pain as men, and that they have more pain related to the central nervous system, which may be something that CBD could assist with.

Mexico is moving forward with its cannabis legalization plans after new legislation was passed by the country's Senate, MJBizDaily reports. The industry trade website reported that the Mexican Senate approved a comprehensive adult-use marijuana legalization bill on Thursday. The country's Supreme Court ordered lawmakers to legislate the legalization of cannabis by mid-December. However, a national cannabis regulator needs to be established before any sales can take place.

The strength of cannabis resin has increased by nearly 25 per cent over the past half-century, according to a new study. The medical journal Addiction released a study that analyzed data from more than 80,000 cannabis street samples tested over the past 50 years in the U.S., Europe and New Zealand. Dried flower THC concentrations were found to have increased by 14 per cent between 1970 and 2017, while resin - also known as hash - increased by 24 per cent between 1975 and 2017. Researchers believe that the increase in THC strength should highlight the need for harm-reduction strategies similar to those used for alcohol.

Altacorp Capital Analyst Kenric Tyghe raised the firm's 12-month price target on U.S. cannabis operator Cresco Labs to $14 from $12.50 earlier this week after the company reported "massive" third-quarter results. Cresco reported adjusted EBITDA of US$46.3 million, more than double analyst expectations, while revenue came in at US$153.3 million. Much of the company's revenue gains came amid strong capacity expansion in the Illinois and Pennsylvania wholesale markets, while investors should expect further gross-margin gains and continued cost decreases in the next year, Tyghe said.

While we expected both strong gross margins on both manufacturing efficiency on recent capacity expansion and mix, and solid expense leverage on scaling and cost control initiatives, the quantum of the EBITDA margin expansion to 30.3 per cent was a material positive surprise." - Kenric Tyghe

CANNABIS SPOT PRICE: $5.86 per gram -- This week's price is down 1.2 per cent from the prior week, according to the Cannabis Benchmark’s Canada Cannabis Spot Index. This equates to US$2,030 per pound at current exchange rates. 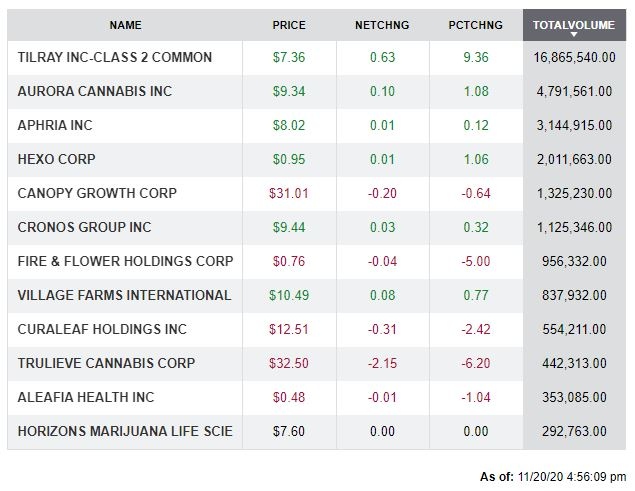