Canadians snap up $354.7M of pot in September, little changed from prior month

Canadians bought $354.7 million of cannabis products in September, eking out a 0.2 per cent monthly gain, according to Statistics Canada on Friday. The sales figures show Canada's legal recreational pot industry currently operates at an annual run rate of about $4.25 billion. Five provinces reported sales declines in September, while Ontario led the pack with a 1.9 per cent monthly gain. Cannabis retail sales were up 38 per cent on an annual basis and rose by 3.5 per cent on a per-day basis. Despite the flat growth, cannabis sales outperformed the national figure with total retail sales dropping 0.6 per cent in September. 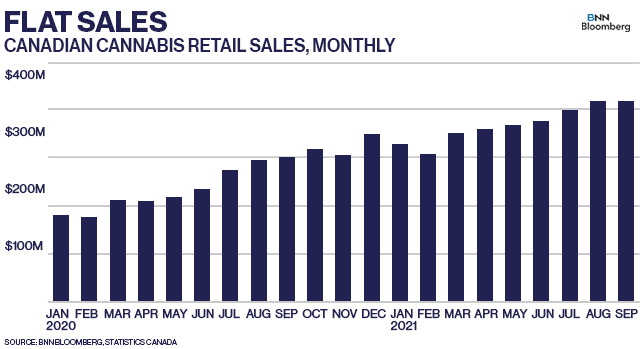 Canopy Growth is shaking up its senior management team, announcing the departure of two C-level executives Friday as the pot giant looks to end a string of quarterly revenue declines. Chief Financial Officer Mike Lee and Chief Product Officer Rade Kovacevic are out of their positions, effective immediately, and will be replaced by Judy Hong and Tara Rozalowsky on an interim basis, respectively. The executive departures come weeks after Canopy reported disappointing fiscal second-quarter results, where revenue fell by three per cent from a year ago to $131.4 million, its third-straight quarterly sales decline. "As Canopy prepares for federal legalization of cannabis in the U.S., now is the time to accelerate efforts to build an industry-leading product portfolio and route to market strategy," said Bill Newlands, president and CEO of Constellation Brands Inc., the alcohol-maker which owns a significant minority position in the company.

Germany appears to be moving forward with plans to legalize recreational cannabis, according to various German media reports. Politico reports that the country’s next governing coalition - which consists of Social Democrats, the Greens and the Free Democrats - plan to "introduce the regulated sale of cannabis to adults for consumption purposes in licensed stores." Germany already legalized medical cannabis four years ago and several Canadian companies including Canopy Growth, Tilray and Aurora all sell their products to patients in the country. It is unknown when the upcoming coalition plans to allow recreational sales, but once it happens, it will see Germany become one of the biggest markets for cannabis products in the world. The Netherlands and Switzerland will also introduce legalization on a trial basis in 2022.

South Carolina Congresswoman Nancy Mace introduced a bill Monday aimed at legalizing cannabis at the federal level in the U.S. which offers a lighter regulatory touch, lower taxes and fewer social justice provisions than other pieces of legislation that offer similar legalization efforts. Mace's States Reform Act would create a three per cent excise tax on all cannabis sales, assign the Alcohol and Tobacco Tax and Trade Bureau to regulate cannabis in the U.S., and allow states to manage whether they would allow cannabis sales or not. Cannabis stocks were mostly mixed following the bill's introduction, as some analysts don't see Mace's legislation to be the magic bullet that could finally end the prohibition of cannabis in the U.S.

Village Farms buys most of Quebec-based producer for $46.7M to bolster provincial presence

Village Farms International said Monday it is buying 70 per cent of cannabis producer ROSE LifeScience for $46.7 million in cash and stock, deepening the company's exposure in Quebec. In addition to producing its own cannabis products, ROSE also acts as a direct-to-sales marketing firm for other licensed producers such as Entourage Health, Sundial and Tilray. Village Farms has a four-year option to buy the remaining 30 per cent stake it doesn't own that would get triggered depending on the company's performance. The deal could add as much as $40 million in annual revenue to Village Farms fiscal sales, according to Stifel-GMP's Andrew Partheniou. The company also expects to leverage ROSE to help grow its market share to a target of 20 per cent, he added.

Canopy Growth's management met with analysts earlier this week to provide an update on the company's U.S. and Canadian plans. BMO Capital Markets Analyst Tamy Chen said in a report that Canopy emphasized its "big aspirations for Canada" and that the company expects to generate about $125 million in revenue in its domestic market while seeing its market share more than double to 20 per cent. The company still sees its ability to enter the U.S. cannabis market contingent on the passing of the SAFE Banking Act, which is currently under debate in the U.S. Congress, Chen said. "There is a general view that SAFE may be the more likely federal cannabis bill to pass over the near term," Chen writes. With Canopy now reducing its production to three facilities in Canada, it plans to keep looking to improve quality with better genetics from mother plants and adding more space to hang dry plants. Chen said Canopy expects that transition to take five to six months while seeing some benefits from its operational changes.

-- This week's price is up 0.6 per cent from the prior week, according to the Cannabis Benchmark’s Canada Cannabis Spot Index. This equates to US$1,815 per pound at current exchange rates.

- The amount of staff major Canadian cannabis producers have laid off since the end of 2019, according to MJBizDaily.