Canadian cannabis sales are beginning to hit the skids

A new report from ATB Capital Markets Analyst Frederico Gomes showed the pace of growth for retail cannabis sales is slowing down after buying activity declined for the first time in the first quarter of the year.

“Despite a seasonally weak Q1 and the potential one-time impact of increased retail competition, we believe the market is maturing,” Gomes said in a report to clients on Thursday. 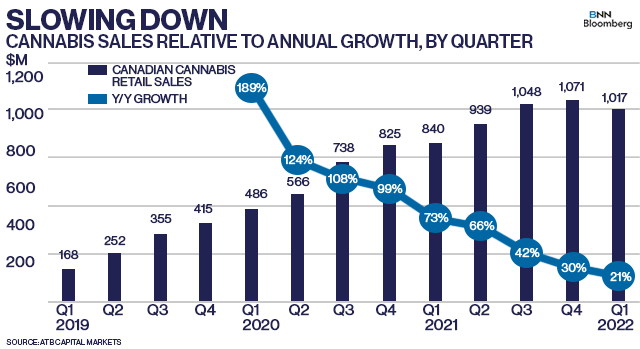 While industry analysts expected the pace of growth to eventually plateau, it wasn’t expected to happen so quickly. And as many cannabis producers continue to chase profitability while also trying to stick out to consumers with new offerings and unique brands, a maturing market may force some companies to make hard decisions.

“If you look at the industry as a whole, it feels like we're getting closer to maturity, but I don't think we're at maturity,” Merton said in an interview.

Gomes said the current sales data will accelerate the amount of merger and acquisition activity that the Canadian market will soon bear witness to. Previous analyst calls for more M&A have been made before, and some companies have avoided takeovers after volatile stock markets broadly lifted share prices thanks to the momentum behind U.S. legalization efforts.

This time may be different, especially if current sales trends continue and capital remains scarce for these companies, several of which such as Aleafia Health Inc. attempt to restructure looming debt payments. Gomes sees companies like Sundial Growers Inc. and Organigram Holdings Inc. as examples of pot companies with strong capital positions, market share momentum, and efficient operations that could fare well in the current environment.

Merton does see more consolidation happening over the next six-to-twelve months, saying it’s pretty clear that the industry will contract with far too many producers and retailers struggling. He was careful to avoid making any predictions on whether Tilray will continue to lead the sector on M&A, but the company remains open to opportunities.

“I think there's too much [selling, general and administrative costs] in the industry,” he said. “So if you're able to find an opportunity that makes sense, where someone has a strong business, which allows you to pull costs out of the system while protecting the shares that they bring, I think that becomes attractive in cannabis.”

Cannabis got a key mention in the Liberals' federal budget on Thursday, with plans to form an industry panel aimed at bringing government officials and other stakeholders together to collaboratively find ways to grow the sector. The strategic panel will be led by the Department of Innovation, Science and Economic Development and has won plaudits from industry participants who have long felt ignored by Ottawa more than three years after the Liberals legalized recreational cannabis. “Today's budget recognizes the scale and impact of Canada's cannabis sector,” said George Smitherman, chief executive officer of the Cannabis Council of Canada and a former Ontario health minister. High Tide's Omar Khan said the panel is something he has been advocating publicly for some time. "Since legalization, there has not been a clear voice for the sector within the federal government," he said. In addition to the panel, the government also announced several minor tweaks to the industry's excise tax and stamp regulations. 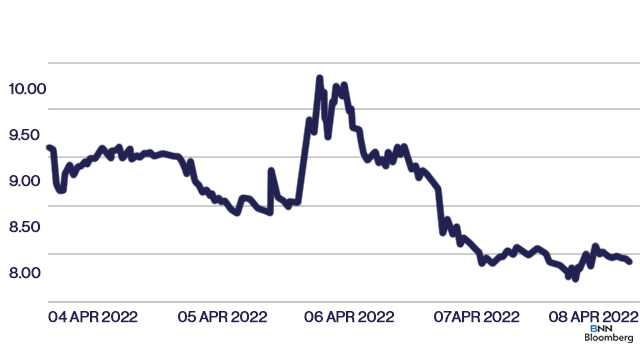 It was another rollercoaster week for Tilray Brands' shareholders after the company reported its third quarter results on Wednesday. Tilray reported a net profit of US$52.5 million, compared with a loss of US$258.6 million during the same period a year ago, while its revenue of US$151.9 million was up about 23 per cent from a year earlier. The company's sales also fell about 12 per cent in the quarter to US$43.5 million, and its share of the Canadian market slipped to 10.2 per cent from 12.8 per cent. Despite missing analyst expectations, Tilray's stock still soared as much as 15 per cent after the results came out, but erased those gains and are now down 14 per cent for the week. Cowen & Co Analyst Vivien Azer said in a note that she remains cautious Tilray will see a "U-shaped" recovery in the near term and expects it will take another quarter for purchasing trends to improve.

Labatt is getting out of the cannabis drink business. The brewer said it plans to wind down its Fluent Beverages subsidiary four years after it initially struck a partnership with Tilray Brands to launch CBD drinks in Canada. Tilray disclosed earlier this year it "concluded" the arrangement with Labatt but would continue to make their drinks on their behalf. Sales of Fluent's Everie brand rose nearly eight per cent to $6.7 million in 2021, according to Hifyre data, but were on pace to only generate $5.4 million this year.

The Crown-owned Ontario Cannabis Store released a study earlier this week examining the difference in quality between legal cannabis sold by the agency and illegal products seized by the provincial police. The study found that of the 22 illicitly-sourced edible products, most on average had only 20 per cent of the advertised THC levels. As well, 19 of the illicit products contained pesticides, often at levels that were found to be several hundred times above the limits listed in Health Canada’s mandatory pesticide testing requirements for cannabis. The OCS said only two of the legal samples were found to contain trace levels of pesticides which were very near or below the limits established by Health Canada.

Yukon is finally opening its doors for privately-owned cannabis retailers to set up shop in the Canadian territory. The CBC reports that Yukon's government will begin private sales of legal cannabis in May on a permanent basis. Yukon previously allowed private retailers to make online sales in May 2020 but that only lasted about five months when the government withdrew the policy, the CBC reports. Yukon's Chamber of Commerce raised concerns that the government was imposing high distribution fees that could make it challenging for privately-run retailers to make money. Yukon residents bought about $808,000 worth of cannabis in January, up from $686,000 a year earlier, according to Statistics Canada.

Canadian cannabis sales in March from data provider Hifyre are showing signs of a quarterly decline and possible tepid industry growth, analysts say. Hifyre estimates that Canadian sales were about $350 million in the month - a figure that the data company came to after extrapolating sales trends in Quebec and other provinces it doesn't have a formal presence in, according to BMO Capital Markets Analyst Tamy Chen. On a quarterly basis, the sales figures point to a five per cent decline, which Chen said isn't that surprising as the first quarter of a calendar year tends to be a "seasonal low" after strong holiday sales. She notes only a handful of major companies saw market share gains in March, namely Canopy Growth, Decibel, Cronos, and Organigram. Other LPs like Tilray, Auxly, Aurora Cannabis, and Hexo lost ground in March. Still, Chen lowered 2022 revenue estimates on Tilray by 17 per cent to $636 million and nine per cent for Canopy Growth to $529 million. 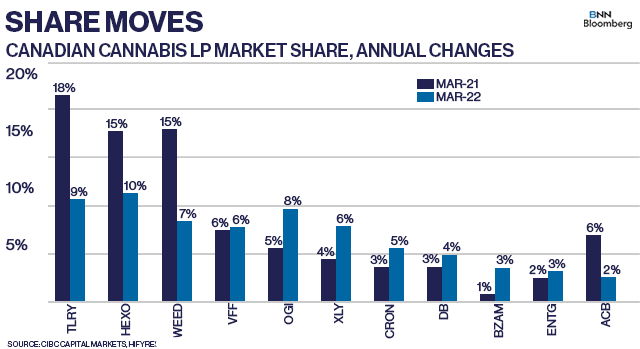 Meanwhile, CIBC Analyst John Zamparo said that there are limited catalysts for industry growth this year, leading his projections of $4.9 billion in sales in 2022 to be "optimistic". Zamparo notes that the Hifyre data shows some interesting product segment sales moves - with dried flower losing about 10 percentage points of market share to 45 per cent, while pre-rolls and edibles notably gained popularity. He highlights how Tilray and Aurora’s brands have fallen significantly out of favour with consumers, with sales of their legacy brands ranking 18th and 14th in March, respectively. "This represents not just ongoing brand volatility, but an intentional pivot to higher-margin international sales," Zamparo said.

This week's price is down 1.1 per cent from the prior week, according to the Cannabis Benchmark’s Canada Cannabis Spot Index​. This equates to US$1,844 per pound at current exchange rates

- The number of Europeans who favour legalizing cannabis, according to a study published by Hanway Associates, a research firm focused on marijuana. Italy and Portugal are among the European nations which stand out as the most supportive of cannabis legalization, the study found.