Cannabis drink industry off to slow start despite plenty of hype

As the saying goes, Rome wasn't built in a day — and neither was the cannabis beverage industry.

The category, backed by beverage giants Constellation Brands Inc. and Molson Coors Beverage Co., is off to a relatively slow start. Roughly $23 million in cannabis-infused drinks was sold in the first 11 months of the year in Canada, according to cannabis retail data provider HyFyre.

That represents roughly 1.5 per cent of the total cannabis market in Canada, which might be mistaken for a rounding error. The low sales figures can be attributed to any number of reasons: manufacturing delays, quality and taste issues and the challenge of convincing consumers that you can drink, rather than inhale, a product to get high.

In November, Truss Beverages Inc., the joint venture between Molson Coors and pot producer Hexo Corp., overtook Canopy Growth Corp. as the pot drink leader with a 35 per cent share of the market after selling its products for just three months, according to HyFyre. Canopy is slightly behind with 33 per cent market share.

The category's future may remain murky unless policy changes that could expand how consumers can purchase pot drinks are made. That could happen over the next year if Canada tweaks the Cannabis Act to allow the purchase of more than six cannabis-infused drinks containing 10 milligrams of cannabis at a time, or if provinces begin to loosen rules regarding where and how pot is consumed publicly.

Canopy's Canadian General Manager Grant Caton said in an emailed statement the company is a "strong advocate" for provinces to allow "on-premise" consumption in lounges and cafes. The company recently hosted an event for journalists on working with provincial tourism associations to advance discussions on consumption lounges. As it stands, Ontario has no plans to allow for cannabis consumptions lounges, while Manitoba is exploring the concept.

Kideckel expects the cannabis drink category to hit about $500 million in sales in the next five years, a figure that corresponds to other analyst estimates.

Truss's Chief Executive Officer Scott Cooper told BNN Bloomberg that he's hoping to target the 20 per cent of Canadians who may be open to trying pot drinks during the holiday season. He's also speaking to various industry associations to help loosen restrictions on how Canadians can purchase these beverages, albeit in a responsible manner.

"At some point, there will be an inflection point where enough people have tried it and that word of mouth gets out," he said. "Our task at hand now is just to create awareness and create ways for people to try these drinks and from that, I think that the growth will come."

The world took a big step in legalizing cannabis this week after a historic vote by the United Nations that rescheduled marijuana and opened the door to how the drug can be regulated. The vote, which took place on Wednesday, changes the classification of cannabis by the UN Commission on Narcotic Drugs to a Schedule I drug from a Schedule IV drug, which placed pot in the same category as heroin and other dangerous substances. The rescheduling will also pave the way for further scientific research into the various medical benefits that cannabis can provide. While the vote is largely viewed as symbolic, it could influence some member nations to open their markets to medical cannabis legalization.

The House of Representatives voted on the Marijuana Opportunity, Reinvestment, and Expungement (MORE) Act on Friday, a landmark legislation that would removes cannabis from the U.S. Controlled Substances Act and thus, legalize it. This is the first bill to legalize cannabis at the federal level that has passed a full chamber of Congress. The vote passed 228-164 following a contentious congressional debate that largely followed party lines. The bill now heads to the Senate, but with only one week until the 116th session of Congress is adjourned, it is highly unlikely to become law. Congress will likely have to re-vote on the bill during the next legislative session, but obversers agree that the bill makes legislation a matter of when, not if.

There's a new U.S. pot company heading to public markets. BNN Bloomberg reported that U.S. multi-state cannabis operator Verano Holdings is planning to go public this month with a valuation of nearly US$3 billion, a sign that capital markets are warming up again to the marijuana industry following a chill in investment over the past year. According to a term sheet distributed to investors, Verano is planning to offer up to US$75 million in shares through a reverse takeover of Majesta Minerals Inc. – a shell company listed on the Canadian Securities Exchange – that would value the company at US$2.88 billion. Canaccord Genuity and Beacon Securities are joint book runners on the deal.

Aurora Cannabis is down another cultivation facility after the company confirmed that it is "indefinitely pausing" work at its Medicine Hat, Alta. greenhouse, a move that will result in the departure of roughly 30 staff. Last year, Aurora said it would stop constructing the parts of the Medicine Hat location which it hadn’t finished building yet and that it would produce some cannabis at the facility. Later in June, the company announced sweeping measures to cease operations at five facilities in Saskatchewan, Ontario, Alberta and Quebec.

Cannabis now contributes about $14.6B in economic activity to Canada's GDP: StatsCan

Canada's cannabis industry now contributes $14.6 billion to the country's economy, according to Statistics Canada. StatsCan said Tuesday that the Canadian cannabis industry's contribution to the country's gross domestic product was upwardly revised to $14.6 billion in September, up from previous estimates of about $8 billion. The revision was made following StatsCan's annual review process which amended all of the agency's cannabis data, which goes as far back as January 2016. In addition to the new GDP figures, StatsCan said that Canadian household spending on cannabis in the third quarter of the year came to $8.49 billion, up from $6.76 billion in the same period a year earlier.

Desjardins Securities analyst John Chu upped his 12-month price target on Auxly to $0.65 per share with a "buy" rating following the company's third-quarter results. Auxly reported net revenue of $13.4 million and an adjusted EBITDA loss of $6.8 million in its Q3, which beat analyst expectations largely due to strong sales of its Cannabis 2.0 products. The company reiterated its target to reach positive adjused EBITDA by the first half of next year, and may reintroduce discontinued products once its Dosecann facility comes to full production next quarter.

CANNABIS SPOT PRICE: $6.04 per gram -- This week's price is up 1.7 per cent from the prior week, according to the Cannabis Benchmark’s Canada Cannabis Spot Index​. This equates to US$2,114 per pound at current exchange rates.

"If I had a dollar for every person who told me marijuana was never going to be legal in this country, I could have the party of the century."

— California NORML Deputy Director Ellen Komp commenting Friday to Leafly on the House of Representatives passing a bill that would effectively decriminalize cannabis on a federal level. 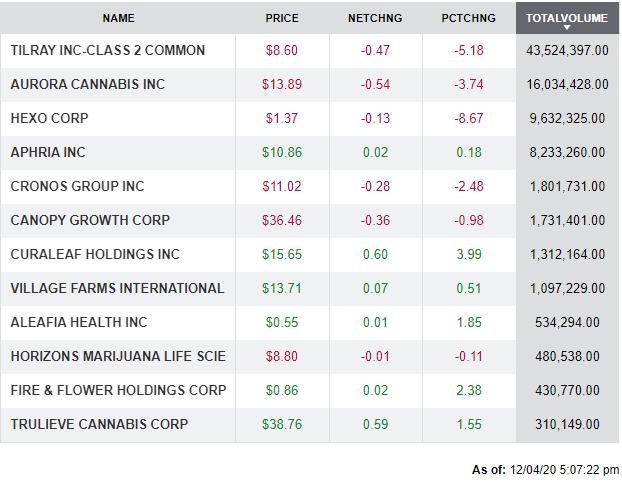