Partnering with Hexo will strengthen our position in the Canadian cannabis industry: Tilray CEO

Irwin Simon said he wants to do everything in his power to prevent a potential demise of the Canadian cannabis industry – including going to court to compel the federal government to improve regulations in the hard-hit sector.

Simon, the chief executive officer of Tilray Brands Inc., is fresh off a deal to buy $211 million worth of Hexo Corp.’s convertible debt. It's a move that could give Tilray a 37 per cent stake in Hexo if the debt is converted to equity. The deal also sets the pair up for as much as $50 million in savings when they begin to collaborate on cutting various manufacturing and production costs.

And while Simon has typically pounced on underperforming companies struggling to stay afloat, he's looking to send a message to the broader Canadian cannabis industry that leaving companies to fall apart may not be in their best interests.

"If everybody out there is blowing up, it's not good for the industry," Simon said in an interview. "Doing this is part and parcel to stabilize the cannabis industry in Canada, because a lot of the countries around the world are watching Canada and what's going on there. I think it's important that all these companies don't go out of business and blow themselves up."

Simon pointed at recent data from Deloitte that showed how much of an economic impact the cannabis sector has had since legalization in Oct. 2018. Canada's cannabis industry has contributed $43.5 billion to the country's economy between legalization and 2021, while also generating more than $15 billion in tax revenue for Canadian and provincial governments, and creating nearly 98,000 jobs, Deloitte said.

But that impact seems to fall on deaf ears in Ottawa as Health Canada has not yet begun its mandated review of the Cannabis Act. The review was scheduled to start exactly three years after the Canadian government legalized cannabis, but is now set to be completed in mid-April 2023.

Industry executives including Simon have voiced frustration at the lack of progress within Ottawa given challenges such as exorbitant excise taxes, strict beverage regulations, and marketing shortfalls.

"Look how many jobs we created, look at the tax dollars coming out of all the companies," he said.

It remains to be seen how Simon will take a harder approach to change how Ottawa views the domestic cannabis industry, but the message he's trying to convey is that policymakers need to take this sector seriously, or risk a diminishment just like other major industries in the past.

Simon noted he's been chasing Hexo for months for a potential deal with Tilray and didn't mind throwing a lifeline to his closest competitor, even though analysts now expect a full acquisition is all but inevitable.

Cantor Fitzgerald Analyst Pablo Zuanic tipped his "chapeau" to Simon for the "creative way" Tilray invested in Hexo, without antagonizing anti-trust regulators but questioned when the company will "feel emboldened enough" to buy the rest of Hexo it already doesn't own.

"I'd rather see it get on better footing and I'd rather see the Canadian market change a little," Simon said. "If I had to pay a higher price, I got a lot more visibility and comfort level in doing that because I see the marketplace and I see Hexo in much better shape."

Tilray gave Hexo a lifeline on Thursday after announcing it would by $211 million in convertible debt owned by a New Jersey-based hedge fund. If Tilray opts to exercise its right to convert that debt to equity, it would give the company a 37 per cent stake in Hexo. As well, the two companies will enter a joint venture that will look at ways they can both partner on manufacturing pre-rolls, beverages and edibles within the next two years - a move that could lead to $50 million in cost savings shared by both Tilray and Hexo. Hexo also announced it secured an additional $180 million in new liquidity from one of its biggest investors, which could also be converted to equity under a 10 per cent discount. Tilray CEO Irwin Simon appeared on BNN Bloomberg on Thursday to discuss the deal, stating that investing in Hexo – one of its main rivals – was done to benefit the industry as a whole.

When Ontario initially announced the first cannabis retailers in the province, delivery was limited to the provincially-owned Ontario Cannabis Store. Then, the pandemic hit and Ontario allowed privately-owned businesses to operate their own cannabis retail delivery and curbside pickup services on a temporary basis. That is now set to be made permanent on March 15, although there’s some caveats, according to MJ Biz. Retailers will not be allowed to operate “predominantly as delivery businesses” and products must be delivered from the same store it was purchased from, the industry trade publication reports.

Curaleaf took the rare step of issuing a statement to inform the investment community that the U.S. pot giant, its executives and shareholders are not subject to U.S. government sanctions on Russia. Citing “rumors and misinformation spread during turbulent times,” Curaleaf said that its executive chairman and largest shareholder, Russian-American businessman Boris Jordan, is an American citizen and was born and raised in Long Island, NY. As well, Andrei Blokh, Curaleaf’s second-biggest shareholder with a 21 per cent stake in the firm, holds both U.S. and Russian passports. “The speculation on social media that the company and its major shareholders and executives will somehow be subject to any U.S. government economic sanctions now or in the future is incorrect,” Curaleaf said.

BAT ups stake in Organigram to 19.5% through top-up investment

British American Tobacco (BAT), one of the biggest tobacco companies in the world, raised its ownership stake in Organigram to 19.5 per cent, the company said on Monday. BAT increased its stake from 18.8 per cent after investing $6.3 million in Organigram after exercising its right as part of the deal the two companies struck in March 2021 that allows for periodic top-up investments following certain share issuances. Organigram issued nearly 11 million shares in Dec. 2021 to help finance its deal to acquire privately-owned Laurentian Organic. Organigram said the extra $6.3 million it received “further strengthens the company’s balance sheet for general corporate purposes.”

Canadian cannabis sales in February are projected to fall by nearly nine per cent from the prior month to $322 million, although they are up 1.2 per cent on a daily basis, according to Aaron Grey, analyst at Alliance Global Partners, who cited data from Hifyre. The trend of smaller craft producers winning market share at the expense of the top five licensed producers continued in February, with bigger players losing 90 basis points of share, Grey said. “We continue to watch and see how enhanced sales force efforts of larger LPs along with consumers returning to [bricks and mortar] shopping can help to turn around this trend,” Grey said in a note to clients. Monthly sales are expected to decline across all provinces in February with Ontario – the country’s biggest consumer market – set to report a 7.9 per cent decline in retail activity in the month, Grey noted.

Dried flower remains by far the most popular consumer segment, representing nearly half of all sales, the Hifyre data showed. Adding pre-rolls lifts that figure to more than 70 per cent of all cannabis sales. Vape and pre-roll products, however, are beginning to see significant pricing pressures which could extend through the rest of the year as both categories remain competitive, Grey said. 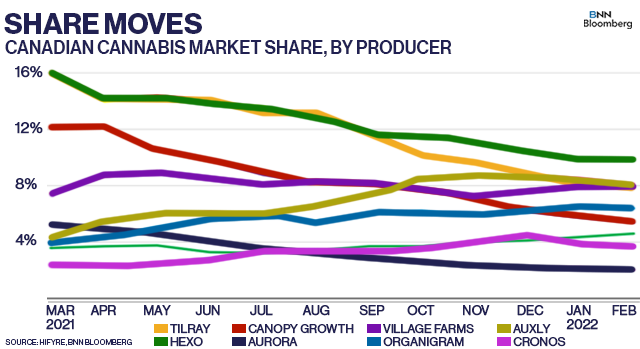 Among licensed producers, share gains made in recent months by Auxly and Organigram may be “losing momentum” given the ongoing competitive intensity in the Canadian market, wrote BMO Capital Markets Analyst Tamy Chen. “It does not surprise us to see these two LPs, who were notable share gainers during 2021, begin to experience smaller gains and even see stagnation. The Canadian market is highly competitive and fragmented while consumers display a strong propensity to trial new products and brands,” Chen said in a report to clients. She noted that Hexo’s market share declines may now be stabilizing but declines are continuing for bigger players like Canopy Growth, Tilray and Aurora Cannabis. As a result, Chen trimmed Tilray’s third-quarter revenue estimate to US$160 million from US$164 million. Chen also points out that craft growers now account for about 20 per cent of the Canadian cannabis market, a similar market penetration observed in areas like Colorado and California. “This would also be positive news for mainline LPs as it would mean craft growers are not continuing to take even more market share,” Chen said.

This week's price is down 1.3 per cent from the prior week, according to the Cannabis Benchmark’s Canada Cannabis Spot Index. This equates to US$1,833 per pound at current exchange rates.

– Beto O'Rourke, the Democratic nominee for Texas governor and former congressman, on his plans to legalize cannabis in Texas.